jvt I have seen a series of net problems like the one below on a Japanese web site : 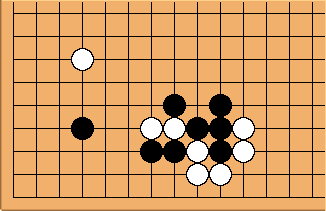 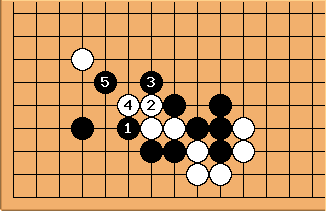 Even though it does not prevent White from increasing its number of liberties, 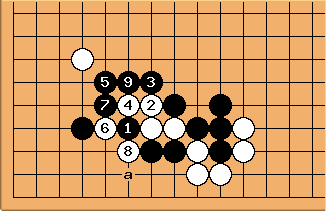 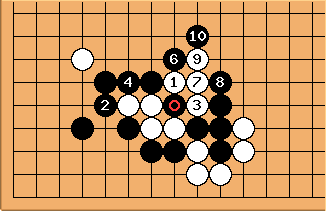 Alex Weldon: Probably worth showing for beginners what happens if White tries to atari her way out. If

, expecting Black to connect at

so that she can then escape by playing at

. As a question to stronger players: Is there still a way for Black to capture if this ladder is also no good for Black (some ladder breaker stone that we can't see here)? I don't see it. 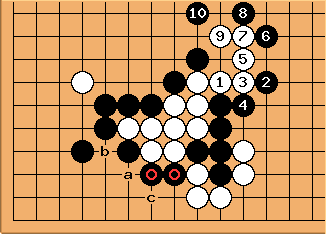 Dan Halver: I'm not at all a "stronger player" but this seems to be a way to stop the ladder. Though I believe white could evade capture by playing a, forcing black to play b, then white can capture the designated stones by playing c (Since I have just seven hours ago started learning GO, please correct any mistakes I have made) : ) 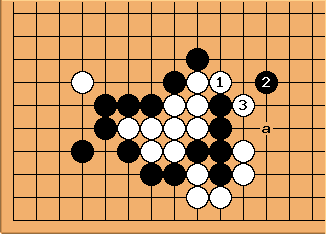 doesn't work out so well, as white will capture by playing atari at

, if the ladder doesn't work for black, black's only options to save his stones are to play at

or a, and black is still in big trouble. If the ladder didn't work, black really needed to not start Alex's variation at all, because this is a disaster... 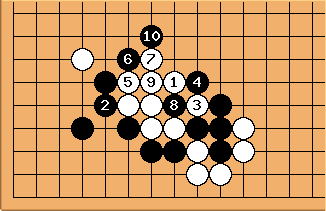 Mef: If the ladder is bad for black, I think he can set up a ko with

. If white declines to fight the ko, black has a chance to set up a different ladder, which may or may not work depending on where exactly the original ladder breaker is.

(sIG): But suppose an extra white stone is in L 11 (that is, it breaks both ladders), doesn't that make it useless for black to pursue white in the first place? Won't white gain advantage? Does this mean there's a fault in the exercise or do we simply suppose the rest of the board empty? 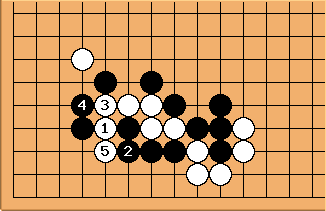 Imagist: What about this? 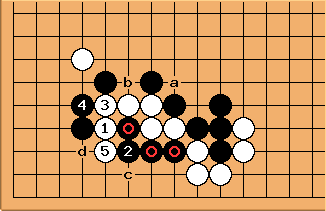 MrTenuki: Unfortunately, the sequence above doesn't work. Black has weaknesses at a, b, and c. Even if black covers both a and b by playing at b, white can still capture

and the marked stones. If black defends at d, white simply breaks out or captures the four stones by playing at b.

is a mistake by black. 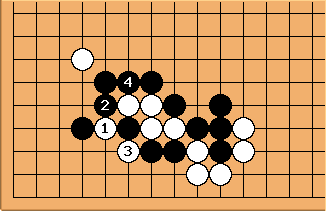