Q: Is this something different from a net?

BillSpight: Interesting question. :-) I suppose you could consider it a kind of net, but it's more specific. 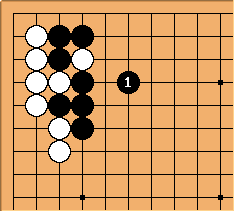 is a net, but not a loose ladder.

Why would you bother, instead of simply capturing and removing bad aji

The way I see it, is that a ladder is a capturing technique where the liberties of the chased chain flip between one and two until the defending side is unable to raise the liberties to two again.

A loose ladder would follow exactly the same definition, replacing 1 by 2 and 2 by 3 respectively.

A net on the other hand is a capturing technique so that the liberties of the chased chain can't be increased by the defender's next move.

This contradicts Bill's statement above, but I'm ready to adopt another viewpoint on these definitions.

Both basic examples of net meet my definition.

jvt: Your definition is too restrictive. (Example moved to Net example 7.)

jvt: A successful loose ladder always ends in a ladder (in order to decrease the liberty count from three to zero, you have to go through a stage of 1/2 liberties.

Bill: One thing that a loose ladder and a ladder share, that a net does not, is that they each reduce the liberties of the chain of stones to be captured by one with each play. In a ladder each play is atari. The typical play in a loose ladder is not.

tapir: Dieter offered a good definition. But it is quite telling that we are not even sure about what a ladder and what a net is: the most basic techniques of all.