Mamoru (守る) is a Japanese Go term, roughly translatable as to defend or to protect. It is used when protecting a weak group that is near strong opposing stones. The Chinese proverb Bi Qiang Zi Bao also refers to this type of defence.

in the following diagram as mamori. 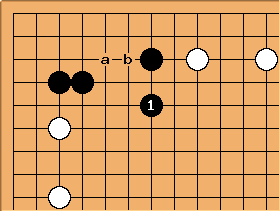 protects against an invasion at a. After a long discussion of the variations that arise as the result of this invasion, Ishida writes that

defends against it. If White nevertheless invades at a, Black responds with b.

John F. Mamoru is to defend pre-emptively as opposed to ukeru which is to defend in direct response to the opponents move.

pwaldron: I suppose a Westerner not well versed in Japanese might use either thick or honte when describing

was called either thick (i.e. atsusa-type thickness) or honte. These terms belong more to tactical situations and the middle game, whereas mamoru is mostly used in the opening in a strategic sense. The position after

is not thick because it has too many weaknesses (see old Chinese games to see how this sort of corner can be torn apart), and it is not honte because it is not defending a specific weakness (the idea behind hon in honte is this move and this move only).

mafutrct: According to my knowledge and also to the page honte, the meaning of the hon in honte is proper. Hon can also mean this, but here it does not, afaik. Anyway, I agree with John that

is neither honte nor thick.

John F. mafutrct: theres more to it than meets the eye. In translation terms, hon- + noun (N) can usually be rendered in one of three ways. (1) the N in question, this N, the N  common in formal documents; (2) the main N (as in honsha = head office); (3) proper, real, as in honmei = real name or honmei = the odds-on favourite. But the unifying element of all these categories is that hon- is pointing to something specific (in linguistics it would be called a deictic demonstrative). What I had hoped to convey was that, even if you opt to use proper, honte should not normally be rendered as (A) proper move but as THE proper move ( the only one). Honte has other meanings outside of go. In music it can be the right note but, again, there is usually only one right note, but lots of duff ones. The importance of seeing this clearly is that (as here) some people think of playing any thick moves or safe moves as playing honte, but the usage needs to be sharpened up. You need to find THE right move. Admittedly things can get murky if we suspect honte is being used in the plural, but Occams razor is not a bad principle to apply to language. There are nuances that can enjoyably be explored. For example, the right move might be translatable in different contexts as honte, kono itte, tesuji, and so on. Kono itte implies aha  a discovery. Tesuji implies a known or knowable technique and can refer to a sequence. Honte is mainly a dull sort of move that rather stares at you. It doesnt take special skill to find it. Rather, you tend not to play it only because you think it might be wimpish. The funny thing is, pros tend to make lots of mamori, honte, gote no sente and other wimpish moves. Which brings us back to the point of this page.

Explanation of the example position

Tapir: As a kyu player (and still ignorant of the higher grades of reading+joseki knowledge), Im embarrassed that

here is still not defending the black corner. Can anyone give a sample line? Thank you. (I would assume any white play inside as overplay but this seems to be wrong.)

John F. Tapir, I dont normally give instructional comments, so I probably dont do it very well, but it so happens that I was talking about something similar to this at my GoGoD weekly lunch today, so Ill take the risk of leaving my usual paths.

Do not rush to punish

My first mistake might be to be too brutal, but for the sake of many western players I think it needs to be said: this is completely the wrong way to look at things! I see the same mindset frequently on GoDiscussions  so-and-so played this funny move  how do I PUNISH it. But go is not chess. Its not often that mistakes or weaknesses can be punished by forced tactical sequences. Perhaps the single most important word in acquiring the right attitude to be a good go player (and oddly theres no page in SL on it) is patience (shinbou in Japanese)

How and when mistakes benefit the opponent

Weaknesses and mistakes certainly have to be identified as early as possible, but the right time to do something about them is almost invariably much later - so much so that pros often say bad shape punishes itself?. Part of skill in go is to tweak a situation elsewhere on the board so that it has an impact on one of the weaknesses you have identified. That is where the patience comes in. It applies in another way. It may be that your opponent has identified one of his weaknesses just as astutely as you, and he gets to protect it before you can get there yourself. Its important to realise (assuming no gross errors elsewhere, of course) that this is not a lost opportunity. Your opponent has just changed your opportunity  now you get to be first to play somewhere else and so your patience is rewarded.

The nature of patience

The patience we are talking about is a positive quality. It is not mere fortitude. It is simply the ability to wait until the time is right. As such it implies the ability to show restraint. My lunch partner, T. Mark Hall, pointed out that one simple change (learnt simply by playing over pros games) helped him go up two dan grades. Instead of playing attack, attack, attack he switched to attack, attack, defend. I suggested to him he might improve even further if he switched to defend, defend, attack, whereupon T. Mark instantly recalled some advice he had from Iwamoto: first make your groups safe, then attack.

The weaknesses in the example

In the position, rather than worrying about reading or tricky traps, Id say a more fruitful way to look at it is simply to observe that without Black 1, Black has three stones to Whites four. Thats why he needed a bit of bolstering. This is mamori, and it is defending - but its not creating Fort Knox (how could one move do all that?).

Now, even with four stones apiece there are still weaknesses. E.g. White can play inside the corner on the 2nd line at both sides, threatening to link up to the outside or, if cut off, to link up internally and get some sort of live shape. This cannot happen yet, and even if it could White would still have to be patient, because the strength Black would get by enclosing White, would play havoc with both White positions outside (and since there are two of them White cannot defend both simultaneously, so one must suffer damage). However, if White plays patiently elsewhere in such a way that at least one of these two groups becomes strong, the Black corner becomes correspondingly weaker.

But a further way of looking at the position is that Black is exposed to ijime (I think youll find a page on that in our online Concepts Library (via New In Go). In short, White can poke in at the sides against the corner, or even press from above, and Black has invested so much here he really has to defend submissively (ukeru in this case, not mamoru). Black

might then become overconcentrated and White can be satisfied with that plus the sente yose points picked up. This too is sufficient reward for any weaknesses in Blacks group. But yet again patience is called for. To do this too early is ajikeshi and risks making Black too strong, which can have an impact elsewhere. 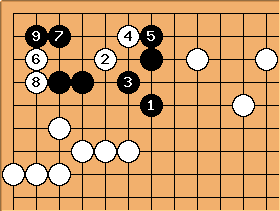 (Black stones further away omitted, sequence not played out at once)

This may seem a lot to take on board at once, but one big benefit of the patient pro style of play which emphasises slow moves, thick moves, honte, mamori, gote no sente, etc. (the Japanese pros call it orthodox) is that it drastically cuts down the variables and makes reading much easier. Its the percentage game, if you like. Pros know their livelihood is safer if they play the percentages. You may wish, as an experiment, to take some pro games ([Yi Chang-ho] is a good choice) and some amateur games and count the number of patient moves in each one. I suspect you will be shocked at the discrepancy, even when the amateurs are dan players.

Bill: John, just a question on the side. What Japanese term do the pros use for orthodox?

John F. Bill, probably the commonest term is honkaku (ほんかく), and purveyors of this style often emphasise that they form part of a major grouping by saying they have a e.g. honkaku ha no kifuu. But others might use, say, chakujitsu. I say purveyors partly because its usually also considered an asset for a pro to have an orthodox and steady style if he wants to teach.

John F. The former. The latter = deeply-laid plan. But only 2 meanings in Breen? Id expect at least five.

Velobici: Breen did have five exact and two more compound. These two appeared to be the most likely candidates. Ruled out ones such as 心棒, 心房 and 信望.