The longest game by number of moves, and perhaps also by time, ever played in a Honinbo title match took place over two days around 10-12 March 2022, between Iyama Yuta and Ichiriki Ryo, as the first game of the 77th edition.

Iyama had been the dominant Japanese professional for about a decade, and had held all seven major domestic titles in 2016 and 2017. Ichiriki, eight years younger, had begun to achieve success a couple of years before, winning the 2020 Tengen and Gosei. Most notably, he'd scored a landmark victory by taking the 2022 Kisei, a title which Iyama had held since 2013.

The Go world had become very interested in the progress of the Honinbo match, as it was being said that if Ichiriki took this title a "new era" would be ushered in, in which Iyama would no longer be viewed as the clear Japanese #1.

After losing the Kisei, the Honinbo had become the only title that Iyama had held continuously since before 2020, and indeed he'd kept it since 2012, having taken the honorary name Monnyu. Another reason for the great attention on the match was that if Iyama could win one more edition, he'd be able to beat the record of ten consecutive times set by Cho Chikun in 1998 (though Cho won twelve times overall).

Before playing at the shrine, the players visited the grave of Sansa, the first hereditary Honinbo. "It was rainy the first day and foggy the next day."

The game lasted for 357 moves. The decisive margin was half a point.

It was commentated by Takao Shinji, with drop in appearances by Hane Naoki, Sakakibara Fumiko and Tsukuda Akiko.

The first game in the best-of-seven was played in the Kinkeikaku (Golden Valley Pavillion) in the Oyama Shrine, Kanazawa City, Ishikawa Prefecture, on May 10 and 11. To review the game conditions: the time allowance is eight hours per player and the final ten minutes are used for byo-yomi.

Iyama drew black in the nigiri. Because of a number of ko fights, the game was the longest in a Honinbo title match: 357 moves. It finished at 9:34 p.m. on the second day, and Iyama won by half a point. From start to finish, the game was marked by relentless fighting. In the early part of the game, Ichiriki seemed to have an edge, but in the latter part Iyama played a clever move that enabled him to manipulate the multiple ko fights to his advantage. More than half the game was fought with both players in the final minute of byo-yomi. 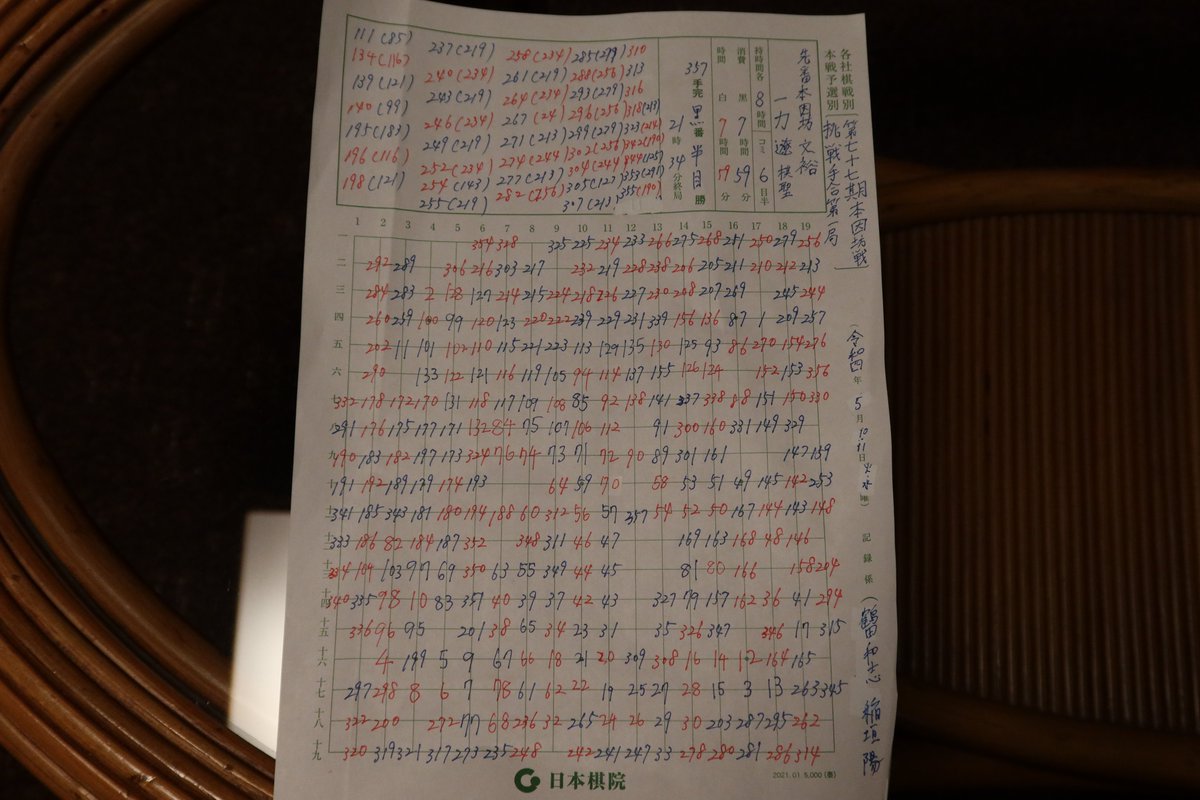