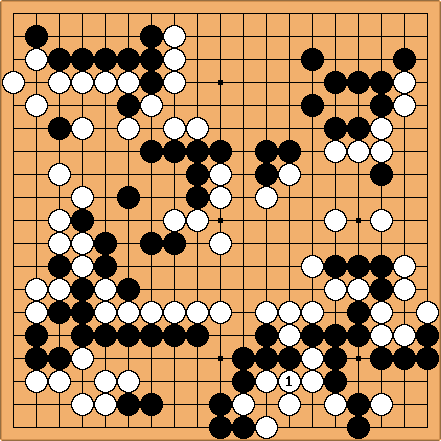 This is the final game in the 2011 Myeongin title match, between Park Younghun and Baek Hongseok. Park has White in this game. He played 158 at

, turning his captured group in an unbalanced kind of ko: it's a direct ko for Black and an approach ko for White, while on the other hand it is a hanami ko for White.

The whole issue is whether White is thick enough on the board to ignore multiple ko threats, so that the profit of winning the ko outweighs those threats. First, we have to understand the local situation and why it is ko at all.

If Black plays conservatively, covering his weaknesses at

turns the life and death status of this group into ko. Given the whole board position, this is unbearable for Black. He must fight.

If Black occupies the vital point of White's group, White cuts at

and threatens to capture at a or b, making the ko very heavy for Black. (Black can also avoid the ko at a considerable cost: see [1]) 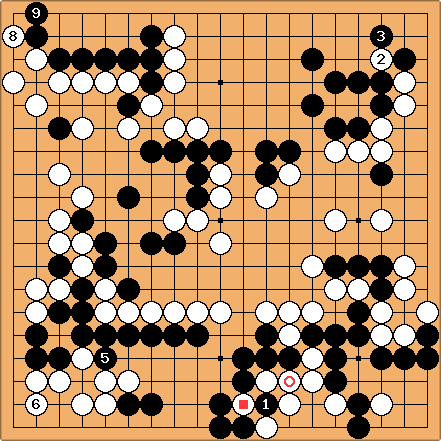 takes the ko first in order to finish the capture as soon as possible. A typical ko cycle? develops, with White alternating between threatening to make big profit (

) and even killing a group (

), while Black is almost obliged to generate big threats, like

which turns the white corner into an L+1-group. 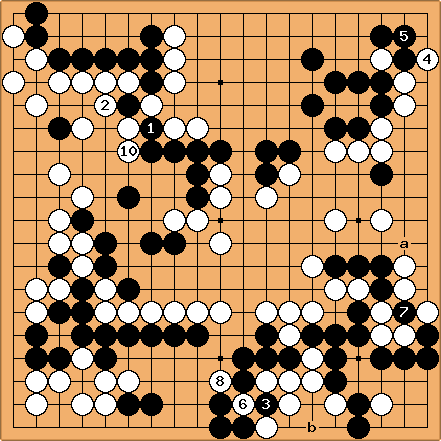 is another big threat, while

is aiming at free endgame again.

is a different kind of ko threat: those stones where dead anyhow and although the follow-up of a is not small, the main purpose of

is to remove ko threats. This invites White to enlarge the ko at

, instead of merely trying to live at b.

of course retakes the ko. 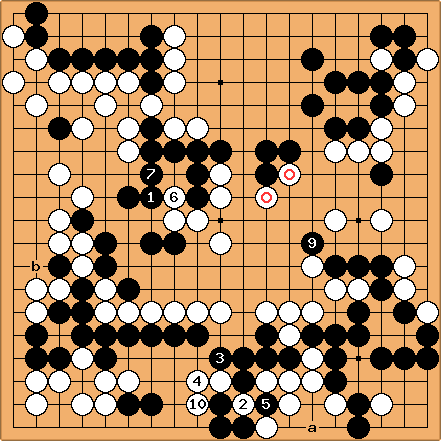 takes the ko, Black has a local response available:

, since Black would have the time to kill at a.

continues where White was threatening before. Black has run out of really big threats, although I'm interested in evaluating b. Anyway, Black uses the thickness he created a few moves ago on the right to cut White on a large scale. White is however unimpressed and

makes a turnaround at the bottom imminent.

Uberdude: The reason white can ignore

is he made the preparatory marked kikashi before starting the ko (about 40 moves ago, pros read deeply!). See my analysis at 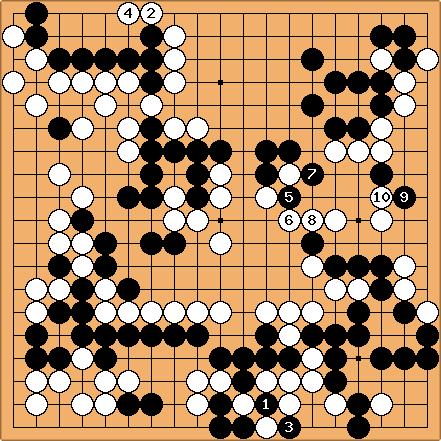 . White has reserved a major threat and kills the upper left corner. So, the net result is that Black has finished off an already dead group at the bottom while White has killed a big group, with a profit of about 35 points. Black now has to prove that his successive moves on the right side can launch an effective attack on White's position, but White skillfully sacrifices some stones. 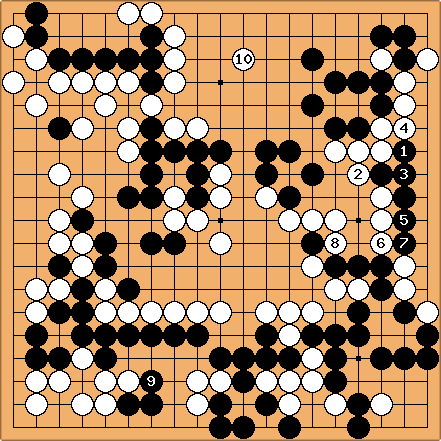 Indeed, after the exchange on the right side has been done, White restoring his connection in exchange for a relatively small side, Black must come back at

to clean up the last aji from White's skirmishes down there. White takes the big point of

and the game is over. A few moves later Black will resign.

This ko fight is an example of lose a ko to win the game: although the ko was an approach ko for White, in which he had to ignore multiple threats, in the end the size of it was so big that Black had to come back and win it, so that White could play two moves elsewhere. Thanks to White's overall thickness, Black's two ko threats, which were ignored, were not big enough in comparison.

[1] This variation avoids the ko completely, but perhaps deemed too submissive for black. -- Vesa 5 dan