This is a spin-off of the discussion about thickness

AlainWettach: There is a close relation between thickness/thinness and kikashi plays. This brings us to the complex question of good and bad forcing moves (usually only the good forcing moves are called kikashis). A real kikashi shouldn't make the opponent's thin group thicker. Kikashis are usually played against strong groups. Just an example: 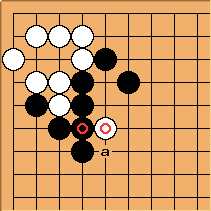 This is a common 4-5 point joseki and

is a good kikashi. Black should answer it with

It doesn't make the black group thicker, since White couldn't cut anyway and it has some influence for white (it might break a ladder for instance) even if the marked stone cannot be considered as "thick". So this shows that even "weak stones" or, in this case "light stones", have influence. Here White wins 1 in terms of influence and loses 0 in terms of potential.

Shouldn't black answer at a, rather than 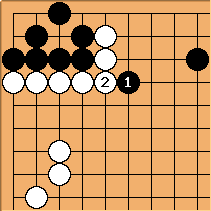 would be a bad forcing move (a thank-you move). Of course, the stone is not completely wasted since it exerts some influence (it could be a ladder breaker for instance), but Black could and should have cut. This means that the peep makes White thicker since she won't have to worry about being cut whatever Black plays in the area. One could say that

wins 1 in influence and loses a lot in terms of potential.

I agree with both these statements, but there is an inconsistency between them, no? If the group which has a kikashi played against is thick enough to ignore the kikashi, we agree that the kikashi was just a wasted move. But, if the group is so thin that it needs to answer the kikashi, the group will, per definition, become thicker afterwards. So I think that a kikashi will always make the 'kikashi'ed group thicker. Of course, a good kikashi should gain more than it loses, but I think that this assessment is very difficult to make sometimes (and very rarely 'black and white'). -- MortenPahle

AlainWettach answers Morten, you are right, it might seem contradictory. In a way, even good kikashis make the opponent "thicker". What I wanted to point out is that forcing moves which kill potential on "really thin" groups (those you might want to attack later) should not be played. Another concept which should also be taken into consideration is light/heaviness.

It is often a good idea to refrain from playing forcing moves if you think that, by doing so, you lose potential you might use later in the game. A good example for this is the peep against a one-point jump.

In this example, Black might peep at a or b, but it is impossible at this stage to say which one is better. So, it is better not to play either of a or b and to await the right moment.

is a classical example of a forcing move against a more or less "thin" group in order to make it heavier (but also thicker).

In some cases, the border between thick and heavy is very difficult to see, even for the pros!

If one considers weak groups as possessing some type of negative influence, this discussion might be clarified.

So a kikashi against a weak group that makes it heavier, reduces its eye shape, and forces a rigid shape on it is probably good. 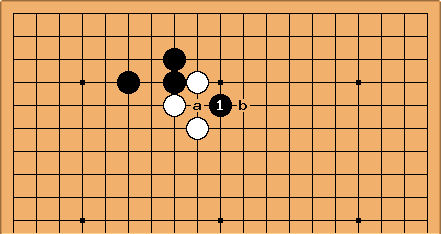 In this case, if White has to answer

at a it seems that all three purposes are fulfilled. But if is possible for White to play at b, taking account of the overall position and perhaps sacrificing some stones, that isn't so clear. 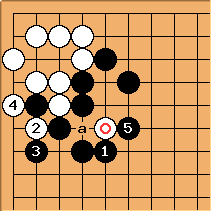 instead of 'a', White can capture a stone in sente with this sequence. If Black had connected at 'a' then the sequence would be gote for White, so

gains a little in the centre but loses points on the edge. I think the balance is in White's favour. White also has the option of exchanging White 5 for Black 'a', though this is unlikely to be good early in the game.

Andrew Grant: This kikashi is part of the joseki precisely because in isolation it has to be answered by connecting, to avoid giving White the sente capture. Later in the game, if Black starts to build a moyo on the left, it might be better for him to play

instead. Therefore White should play the kikashi early to ensure that she gets the submissive answer she wants. 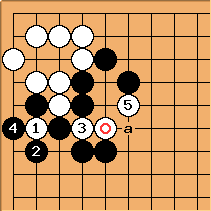 Paul Clarke: White could also cut with this sequence. If Black wants to avoid this he has to play

Clever. Thanks for explaining that.