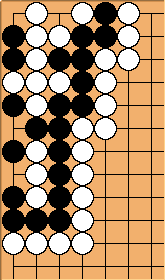 This extremely interesting position is (simplified) from a game between shapenaji and aguilar, presented on GoDiscussions

Black has the option of playing

, making a direct ko which he takes first.

White can make ko like this. This is a very difficult ko for white, white will need at least four more ko threats than black to successfully win this ko due to the approach moves required!

If white actualy has the ko threats for this, then black can avoid the variation by not playing

, but like this, making double ko seki. In this case, black gets one free move elsewhere with

If white does not have four, but has two more ko threats, White can fight the earlier ko and can make double ko seki.

Black is in no hurry to play this position, the worst that can happen to him is double ko seki in exchange for a free move elsewhere. White cannot force anything until he feels he can ignore two ko threats in order to force double ko seki.

If the position remains on the board until the end of the game, then under Japanese rules white is dead, while under Chinese rules it must be played out. Since black will win the ko if there are no ko threats, black will usually win in that case as well. If, however, there is one unremovable ko threat for white elsewhere (eg: due to seki), then black can choose not to play, in which case the position ends up as seki. Since black can always force double ko seki, there is never any point for white in starting the ko after the game, no matter how many unremovable ko threats.