Gomoku narabe is the unrestricted game of five-in-a-row that can be played with the same board (goban) and stones as Go. It has been analysed to a first-player win. Renju and ninuki renju are variants that are more serious games.

Gernotti: What about the term Gobang? There is a Ravensburger Go & Gobang packet with cheap plastic stones, and as far as I can remember, the Gobang-rules there were also something like five-in-a-row.

Andrew Grant: Gobang is indeed five-in-a-row. The name is apparently a corruption of Goban (Go board). It seems that the game was also marketed under the name "Spoil Five" sometime in the 19th Century.

Niklaus: As far as I know (from an instruction manual which came with a friend's go set, which, rather misguided imo, recommended this game as a way to get used to the thinking required for go... why not Atari Go?), Gobang has an additional capturing rule. If two stones (not more) are "clamped" by an opponents stone on both sides, they can be captured (see diagram below). Capturing 10 stones is an other way to win, besides placing five in a row. 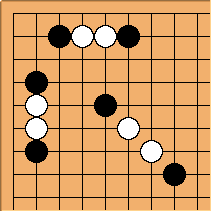 Andrew Grant: This rule comes from the game of ninuki renju mentioned above. Ni-nuki means capture two. It was apparently invented by Kubomatsu Katsukiyo, 8 dan, in the 1920's.

DougRidgway: A capture-two variant became popular in the '80's in North America under the name Pente. The

Ksi?: Connect6 is a game like Gomoku, but it's goal is to connect 6 instead of 5. There are no other rules besides first move being 1 and all subsequent moves being 2. More info on:

lukasz.wlodarczyk?: I believe the game where capturing stones by "clamping" of two stones is possible is also called "pente". See

RueLue: And there are two other pages on the English Wikipedia, which are also interesting:

Renju in the English Wikipedia