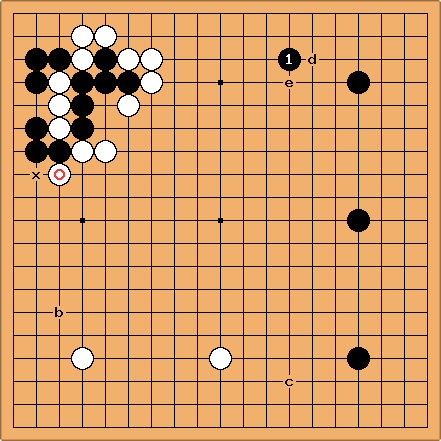 Mikesh: I'm only a low double-digit kyu. I often misjudge the position on the goban. So please comment on my analysis.

Mikesh: For the sake of the original problem I would play

, although I prefer Be from the alternative choices. Be helps in the upcoming center fighting, when both players try to reduce the other's moyo. So

would be too low for my taste.

Mikesh: I wouldn't play Bb because of the white thickness. White could easily attack this stone and naturely strengthen her group in the lower part of the board in the course of the attack.

Mikesh: Bc is also not really interesting to me since the lower part of the board is not in the focus of the game right now. White gave Black some territory in the top left corner. As compensation she got some wall. White's strategy should now evolve around the usage of this wall. Letting White get Wd gives her some ideal extension from the wall, which will turn the upper part of the board into (more or less) secure white territory.

Mikesh: Additionally the white moyo on the left is still open from below (there's no white stone at x). So White has to secure the left side, when the top wall is neutralised. Otherwise she has to face a difficult game considering the potential of Black's sanren-sei on the right. (I'm especially interested whether this is correct or not.)

Alex Weldon: I didn't create this problem, but I think you have the right answer. Preventing a wide extension from the White thickness on the top is urgent. I don't think b is as bad as you say, though. White will almost certainly pincer, at which point Black can invade the corner (or jump 'n' slide, if it's a high pincer). White won't want to block on top (because, as you say, any "territory" on the left is open at the bottom), so the White stone will get linked up. Still,

PatrickB: More generally, I'd say that because of the open skirt on the left side and the marked white stone, the left side is uninteresting for both players. White cannot make a large territory there because of the open skirt, while black cannot because of the marked stone and the white stone at 4-4. The corner invasion Alex contemplates would also just help white make a thick wall facing his stone on the bottom center white hoshi point without giving B a really large territory in compensation. I agree that the suggested move at Bb is the right one.

Warder05: I'm inclined to go with Mikesh and Alex on this one. Even though I'm only about 16k. It appears to me that white can play pretty easily at

since black might find pinchering that stone difficult in the shadow of white's thickness. The reason why I think 'c' is wrong comes from the fact that I think white would play at 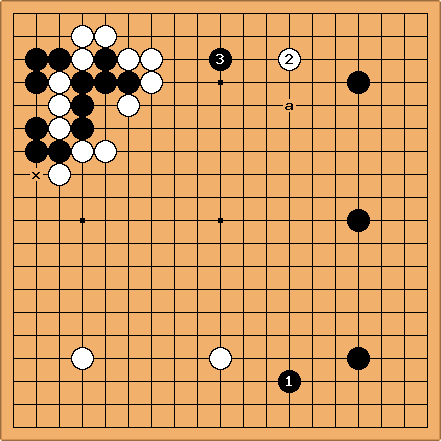 Warder05: While the play at

is obviously not the best play,

looks really strong to me. Especially since a 'pincer', like

in response would actually look more like an invasion than an attack. Bill: Patient: Doctor, it hurts when I do that.

Doctor: Then don't do that.

Normally, when assessing a play, it does not help to argue that the opponent has a bad response. Consider better replies for Black, such as a cap at a.

fractic: I like a one space high approach for

. It works quite well with white's thickness backing it up.