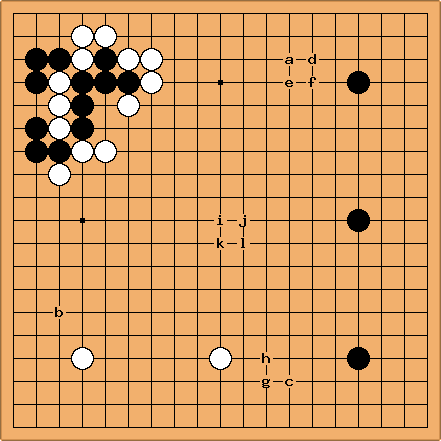 d through l all make sense. In my opinion, at least one of them is better than any of a, b, or c.

Andrew Grant: Move a gets my vote. My analysis follows: Firstly, this appears to be an amateur game, as is seen by the failure of Black's sanren-sei strategy. Sanren-sei aims at a large moyo with the aid of an extension to the midpoint of either the upper or lower side. However, here the lower extension is gone while the upper extension would be suicidal in the face of white's thickness. It is hard to believe a professional would play himself into such a position. That being so, Black's best option is to abandon the influence-based sanren-sei strategy and go for a territorial game. Black has no hope of outdoing White in an influence game (which implies Bill's suggested moves around tengen are inferior). It's true that from a territorial point of view Black would prefer the 10-4 stone on the right to be at 10-3, but that's the price you pay for getting it wrong in the first place. Passing on to the three moves originally suggested, move b in the lower left is clearly the worst - White is open at the bottom at the top left, making this area of the board uninteresting for both players. The other two moves are both solid territorial plays but a is superior as it blunts the influence of White's top left position and prevents White from developing it with a move like f.

Bill: Well, since I made the suggestions, let me reveal my choice: e. Of the original choices, a is pretty clearly best. As Andrew points out, b is not urgent, since White's territorial prospects are not so good there; at the same time, a Black stone at b could undergo a strong attack. c is, well, not very dynamic. On the top, a White kakari at d would be ideal. Forcing White to play closer to her own stones (if she does approach) is then good. Besides a, d - f do that.

One principle when making plays of around the same size is to make plays with large follow-ups. This is more important than preventing the opponent from making similar plays. c suggests an invasion of White's moyo but is not as good in that regard as the other plays suggested around there. i -l in the center reduce the potential of White's wall and have large follow-ups on either the top or bottom.

As for choosing e over a, I think that, with Black's sanrensei, Black has better follow-ups from e. Since Black is the one with the secure territory, I do not agree that he needs to go after more right away. I think that the higher play has better balance.

dnerra: For similar reasons I would much prefer h over c if forced to play on the lower side. This is a moyo contest at the moment!

tderz: Just thinking in terms of strength on the left, which extension of the upper right corner -> I'd go for d among a/d/e/f (and all others)
This area seems to be most important to White due to the big investments in strength/influence.
Similar exercises occur in many Fuseki problem books. (I should look for references; a is then usually despised)

Black h/g/c try to yield the same for the black Sanrensei,
but they do not diminuish great White influence (for which she gave away corner territory). The lower White area is still open, why worry?

The same holds for b: because B was already forced to play b14, there is no White sente in that area,
hence that skirt b11/12 stays open and
-> the area is not so valuable.

Last (but not)/(and) least: playing in the center:
unconventional thinking in this position.

grolich: "'a' is usually despised": untrue (unless I lost your meaning there...). I have seen it in a few actual pro and high dan level amateur analysis, the large knight's move enclosure from a star point is a standard way to reduce the opponent's thickness on that side. the reason 'a' is often a problematic move is that it does have a weakness: after having played 2 stones near a corner, the opponent can take it in sente. This makes it a bad move often. Doesn't seem to matter here, white's thickness is a lot more important, in my opinion, so a looks extremely good (far better than the other options given in the original problem. It is out of my league to compare it to the other interesting 'e' option given here).