Types of Basic Kos , " the author is particularly grateful for criticism or suggestions.".

My basic pieces of advice would be:

RobertJasiek: The purpose of the paper Types of Basic Ko is not to be as simple as possible but to be as complete as possible as current research allows. Contrarily an introduction for beginners might pretend simplicity by not mentioning a subclassification of disturbing death, not mentioning disturbing life, not mentioning semi-stable kos, and not mentioning default unknown kos at all. - It adds a lot to distinguish ko types more precisely than "player A can capture stones of B" because the strategic behaviour of kos differs when their subtypes differ and because it allows a better understanding of ko rules referring to ko types. - Adding "of his own?" adds essential information. If it were omitted, then it would be factually wrong because the opponent's uncapturable life would suffice to prove "life" of the player - absurd! - Also I like avoiding redundant definitions. But currently there are none (for which one can prove it). E.g., it took quite some effort to define fighting ko without a "is not a disturbing ko" condition; I could achieve that by consistently using virtual-force in the definitions. - About keeping it clear: You are right, but I cannot fulfil it in a free paper; it requires so much extra time that I need to do it in a commercial book. - Avoiding the creation of the new term "virtual-force" is possible if one replaces the relevant definition on the less formal level of rules. This would have made the text much longer because it would probably require a couple of rules instead of one definition and it would require to replace every usage of "virtual-force" by a longer text like "force while the player (but not his opponent) abides by the XY-rule(s)". Actually it is more nasty because usually rules are restrictions of rights. Here we need rules that drop restrictions. Spelling out this clearly for also the input rulesets requires yet more text. So I cannot agree to your suggestion. Quite contrarily, introducing the new term has the advantage that elsewhere one can refer to it without having to cite lengthy rules each time.

tderz: Just for clarification for the less involved ones (e.g. me):
i) What is the outcome? Can White be captured? Is Black dead? :-) Is it seki?
ii) "Since dead ko requires that at least one player can create a two-eye-formation or uncapturable string of his o(w)n the ko regardless of whether it is initially open or closed for him" (I guess the term 'own' was intended). In my view, the present definition (top of page) is not stipulating that, rather only " dead stone" of one side.

If the 2nd requirement "two-eye-formation or uncapturable string of his own" was added to the first criteria (that the other colour has "dead stones", then it would be clear, but lengthy , yet perhaps even superfluous, as I would prefer a definition which is apparently obvious at first sight and not after investigations.
If this 2nd requirement was not added, above definition "A dead ko is a ko where one side's stones are dead and can be removed by the opponent quite like ordinary dead stones from territory. " is unclear (at least to me), because it does not unambiguously exclude the possibility that both (color) groups are dead (e.g. which can happen in 'normal', direct kos).
Secondly, the vague relatifier quite (qualitatively: almost?, very much?; occurence frequency: usually?, seldom?; exceptions?) seems to raise an objection w.r.t. clarity.
Do 'ordinary dead stones' (and special ones?) exist, or is the situation of removing an ordinary one?
In conclusion I think above attempt for definition - if necessary at all (sic)[1] - needs further contemplation and re-wording.
My attempt is: a 'Dead ko' involves a group of 'dead stones' and at least one ko at that group., resp. 'Dead stones' with ko [1]('dead stones' can be clarified on its own somewhere else).

-- [1] tderz: 'dead ko' , 'dead stones' describe each a situation by their future results.
Or shorter: 'Dead stones' with ko, does this really need a distinct definition?
How about: 'Irrelevant ko'?

RobertJasiek: The name of a term should be suggestive if possible. "Second-most-relevant-type-of-ko" would be more appropriate than "irrelevant ko"! Your name suggestion is a good example how traditional go theory enjoyed the naming of many almost irrelevant kos like "triple ko" or "eternal life" but failed to identify a very frequent ko type entirely. 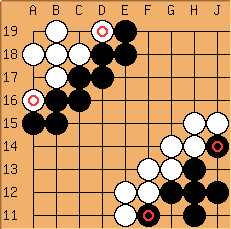 tderz: Above 'dead ko'-definition reads: "A dead ko is a ko where one side's stones are dead and can be removed by the opponent quite like ordinary dead stones from territory. "
Are 'dead ko's a6, d9, f1 and i4 all the same - but not inter-related?
If they are (inter-related), does above definition then suffice? (and encompass all possible cases

RobertJasiek: Forget about reading the informal description as if it were a formal definition. - For the purpose of my formal definition, each of the four kos is analysed independently of (possibly not yet) assessed ko types of other kos.

tderz: I wonder whether a formal definition can be successfull when expressing something simple with more, redundant a/o unclear terms (cf. in other areas:

RobertJasiek: The "simplicity" exists only as a deception when hiding many other ko types and then not noticing the ambiguity between "dead ko" and them.

The "formal definition" below has been suggested:

An attempt for definition worded as 'Dead stones' with ko comprises

The basic problem of any definition defined by their result is that it might not be easy to verify prima facie (directly at sight),
hence my simple 'Dead stones' with ko is a functional, unclear one too! (cf. ex. below[6]) 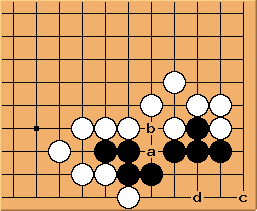 Yet a 'definition' must use clear words originating from commonly accepted, unambiguous sources (Webster, Longman, Duden ... and the basic Go dictionary of course).
'virtual-force' does not appear anywhere there and seems to be grammatically incorrect too!

It is a question of skill to correctly define the status of that group and see that there is a ko involved here,
and those few who would state that Black is out-right dead are of course wrong.

Yet this example demonstrates too that 'dead ko' is not a prima facie-derivable characteristic from a very local position, rather an end of a thinking process, more precisely the one if both players play technically most correct[5].

Basically that means that the teaching of the given example will be contested by many: 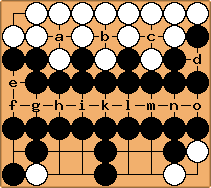 "Each of the 6 kos on the board is a dead ko. Black will be able to remove all the white stones from the board."

While this may be eventually the case - perhaps depending on rulesets[3] - any of the kos a, b, c and d are in first instance just kos.
tderz: Any further distinction (e.g. they are not direct kos) a/o higher abstraction ('dead ko' or 'moonshine life') should be proven if not apparently obvious at first sight (not the case here). 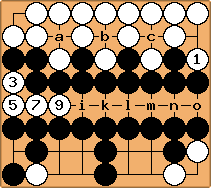 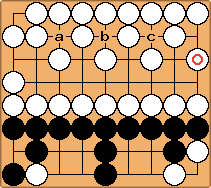 [3] and in this board position comprising comprising the lower half of the board.

tderz: 'dead ko' , 'dead stones' describe each a situation by their future results.
Or shorter: 'Dead stones' with ko, does this really need a distinct definition?

tderz: OK, thank you & 'nichts für ungut' (no hard feelings!), herewith I'm out of this.

RobertJasiek: We might wish consistent terminology. But such unification is for the future. Currently everybody or every group of people with a specific interest develop their own sets of terms. It requires time, more research, and more discussion to unify different approaches and convince everybody to drop factually outdated terms. However, people like words they know and convincing them of using more efficient or more accurate language is difficult. We see this also for natural languages.

There are different terminologies for death. Among them are:

1) dead versus alive in scoring rules

3) dead versus unsettled and alive in some pragmatic strategic model

3: The ko stone's status is unsettled.

Rather than saying that one of the models would be better for identifying death than the other models, each model has its right and purposes.

Model 1 applied during the game is also not absolutely conclusive. A not answered ko threat can change death into life again. Therefore in practice an agreement of all models on something being dead may be deceiptive. Life and death are dynamic until (at least) the game end.

RobertJasiek: Learn why the definitions need "virtual-force" and why "force" would be insufficient! Otherwise kos with local threats or approach plays could not be identified properly!