The "Dake-san Game" of Hikaru no Go

In Hikaru no Go, Fujiwara-no-Sai and Hikaru Shindo challenge a dishonest man named Dake-san (Mr. Dake) in order to get Yuki Mitani's 10,000 yen (about 90 U.S. dollars) back from Dake-san.

After the game is over, Dake-san stares in stunned silence at this board before muttering "Hon'inbo Shusaku": 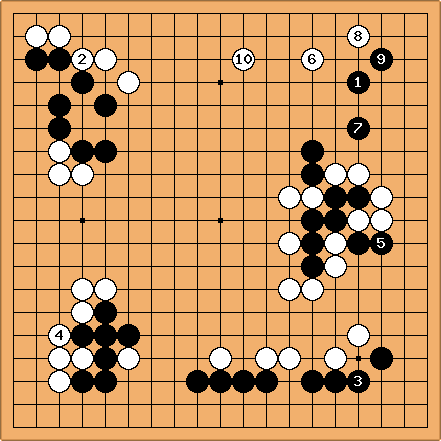 Dieter: Not a chance this is a historical or contemporary pro game.

sergio0p: Dake-san stares at the board in shock and says only: Shusaku! Does anybody know if white play resembles Honinbo Shusaku's style? Why?

George Caplan I do not think it has anything to do with the style of play, simply the strength. My recall, without checking, is that Hikaru comments that he is about as strong as Shusaku when they begin playing, so I always concluded that was what prompted the comment.

germ? The pretty boat shape that White made when pressing Black down (whose future is seen in the top left of this diagram) is almost certainly pulled from a Shusaku game or similar. I don't know the exact one of the top of my head, though, and it would be somewhat hard to search for it, since this final board position is meant to show off an extreme imbalance of skill at a glance and was probably deliberately constructed, together with the out-of-era star point joseki in the bottom.

CYP2D6? George Caplan: This is absolutely true, when asked about his strength, Hikaru answers: "About as strong as Shusaku".

iopq: I see white is ahead, but by how much? I am bad at estimating points this early in the game.

billybones: I'm not good at counting score either, but I just loaded the SGF up in CGoban and the score estimator has Hikaru/Sai winning by about 73 points.

ThorAvaTahr: haha, please don't use SE as a tool.

chaos?: Sai must have played for Shusaku (the character, not the real Shusaku) as he does for Shindo, therefore Shindo seems to be playing with the same style when Sai plays for him.

googleplex?: points aside, the thing that interested me about this game was that they were able to see the arrival of inevitability so very early on. I have often felt during my studies that pros will more likely end games early like this rather than waste their time on yose, considering it to be meaningless or petty at least not as worthy of their time and attention as middlegame; this is quite obviously a great example of the strength of knowing when to resign.