This article is about a game in the anime and manga series Hikaru no Go. Two characters, Toya Meijin (the meijin in the series, real name Koyo Toya) and Fujiwara-no-Sai are playing a Go game. Hikaru Shindo, the protagonist, is placing the stones down for Sai, who is a spirit. Hikaru makes a comment regarding one of Toya Meijin's moves.

When Sai's game against Touya Meijin is finished (chapter 116) Hikaru comments one of Touya's moves. Toya Meijin had a placement tesuji in the left top corner that allowed him to skip connection and thus win the game.

Hikaru is speaking about move #181 (the

game is really between Yoda Norimoto (White) and Rin Kaiho played on 1997-05-01 during the 22nd Meijin League). 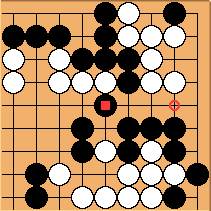 Hikaru says: "If he had placed a stone in the corner over here..." (we can't see where he is pointing) "White is forced to protect" 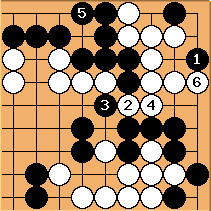 According to Vesa 5d, Black scores points compared to the game. 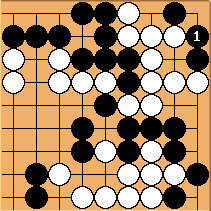 Later, Black can claim approximately 7 points in the endgame

The critical thing is that without S15 (see game) white has to answer T17 with T16 then if black tenuki locally white plays at T18 relative to if white plays S15 first then if black T17 white T16 and we can see although the same number of moves have been played on each side in the game variation white is 1 pt ahead. It's not that significant if the game were not close.

If white responds to black T17 with S15 then whites liberties are not enough to squeeze when black plays T18 so white will respond with T16 but this move does not work well with S15 so S15 is quite an important yose as it allows white to respond to T7 with T16 so white can keep the corner regardless of outside liberties?

You can see the whole game

here and it was close, White (Yoda) won by a half point.

The game record was published in the Nihon Ki-in yearbook issued in 1998. There are very brief comments with no illustrating diagrams but maybe there is some interest because there are comments on some other moves in addition the one Hikaru commented on. The commentator is not named. Here they are: "White 12 is a new move. Black 19 is a little kikasare (pushed around). Black 33 is dubious; there is no good ladder breaker. Black 39 is a popular move in Korea. Black 59 is a bad move. The moves following Black 99 are reasonable. After Black 101 it is a close game. Finally, if Black 223 had been at the 224 point Black would have won by a half point."