This is probably one of the games which gave 5 dan Takemiya the title "9 dan killer"! It is quite typical of Takemiya's original style, although he does not use his famous san-ren-sei.

I made up all comments presented without a name, so they are NOT to be relied on! Feel free to write your own annotations! 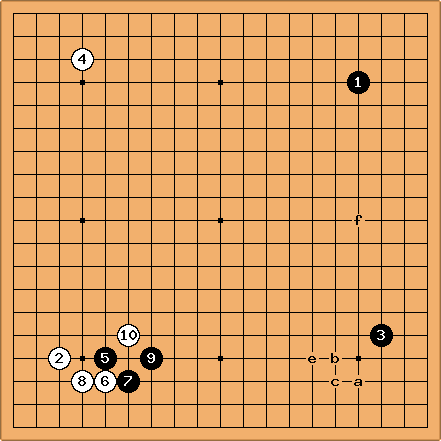 The black moves in the fuseki already show a certain disregard for immediate territory.

Kokiri: I'm quite interested in what a play at

seeks to achieve. After

here, it looks as though if White approaches at a, Black can play b, White c, Black d etc., which works quite well with

, especially if Black gets f. What sorts of responses would Black look for to answer an approach of White b?

Klaus: At which move do you want to discuss White b?

. The standard comment on mokuhazushi is that it would be biased towards the top side, but a black position on the left starts to make a white approach look hazardous. My thoughts on this are no very clear. Perhaps I shall have to go to mokuhazushi and do some more research... 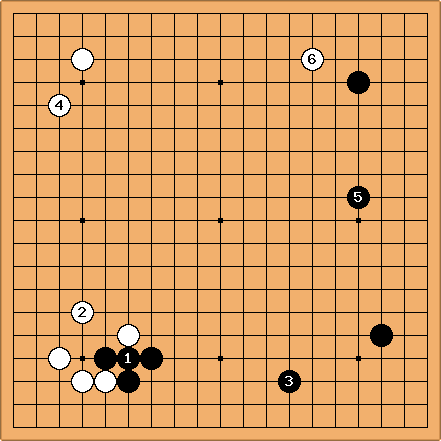 The first remarkable move is

: a dual purpose move, extending from the lower left, and making a strange shimari in the lower right. Of course, both formations are open for later invasions.

is played in the same spirit.

I guess, that Black has two good reasons for playing like this:

However, these plays are not too unusual as part of a moyo strategy.

is the first real cosmic move.

Thad: I don't see the significance of 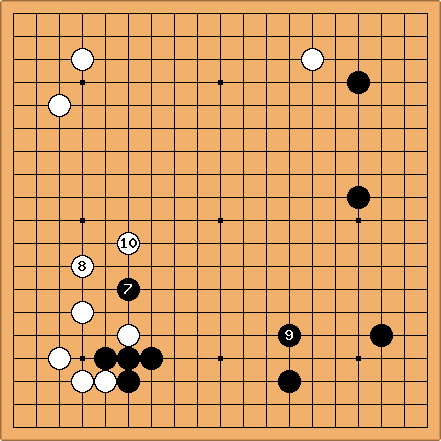 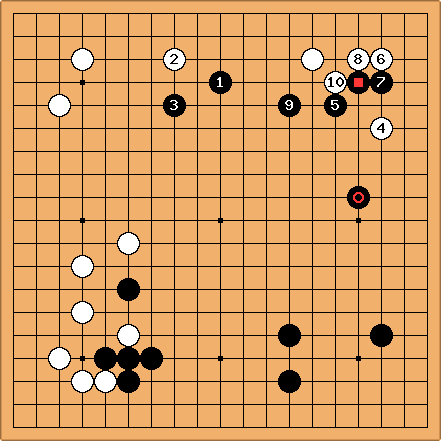 Playing the high pseudo pincer at

is natural, considering the presence of

to fight for central influence.

I don't know whether this formation has a name, but I would like to call it "the eagle's wing" (see reference diagram below), because I always associated

To understand the joseki after

in the upper right corner, it might be useful to have a look at the 4-4 point, double low approach. Of course, things are a little different, having the support of

, an idea which is mentioned at 4-4 point, double low approach. 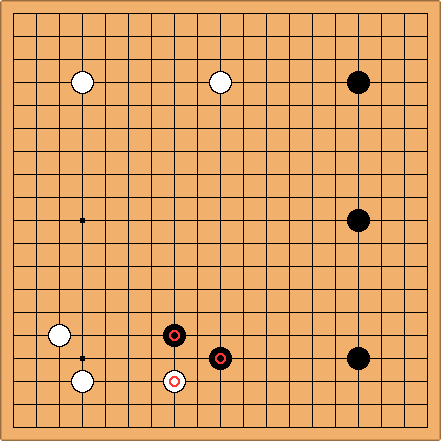 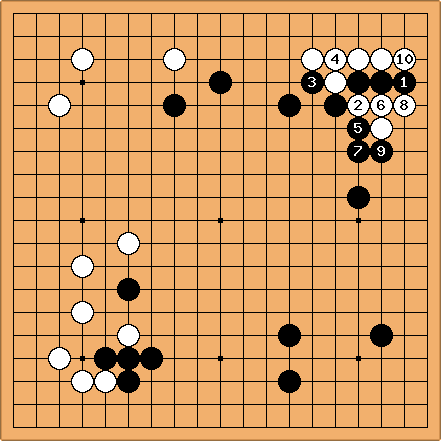 In the following sequence, Takemiya manages to cut White off from the right side and, what is even more importand, fromm the center.

In addition to that, his sacrifice has gained him sente. He uses the gained speed to play a cosmic boshi, securing his moyo from the top. 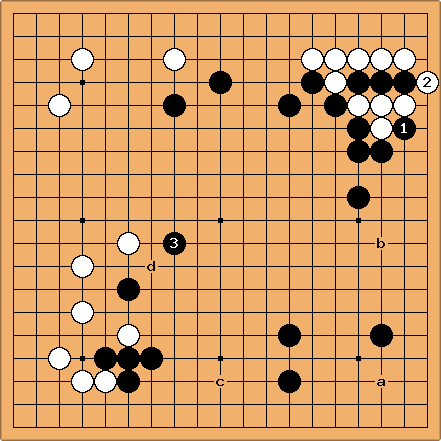 , we can already see a large Moyo on the right side. White may have virtual groups at a, b and c, but he can't make all of these groups alive!

On the other hand, Black still has a (serious?) weakness around d to keep in mind.

Floris: d doesn't look like a weakness to me at all (not just yet). I think it's actually a very bad move for White to play there, as he will only help make Black very solid (and make invasion at c even harder).

Klaus: You are certainly right! We will see something like this happening in the game. Your sequence includes a very important insight: It is OK to fall back, and even sacrifice some stones on the way, if you can gain a solid wall in return. In a way, that's what happened in the upper right corner as well! 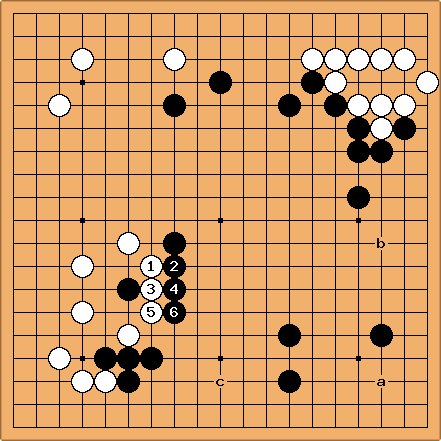 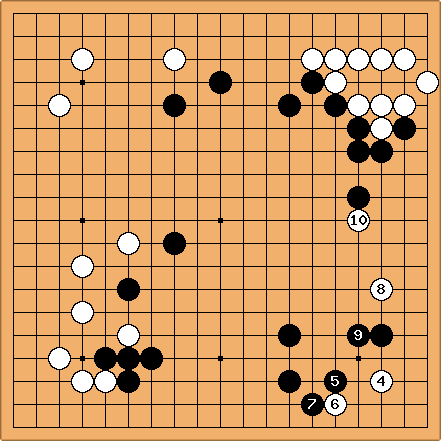 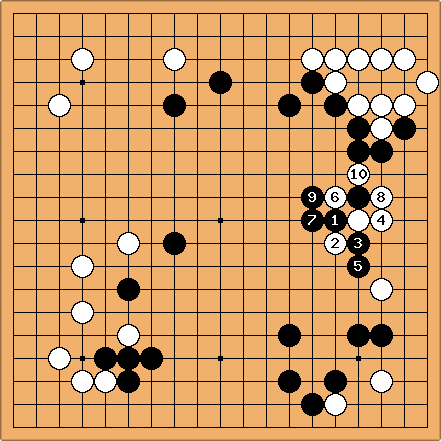 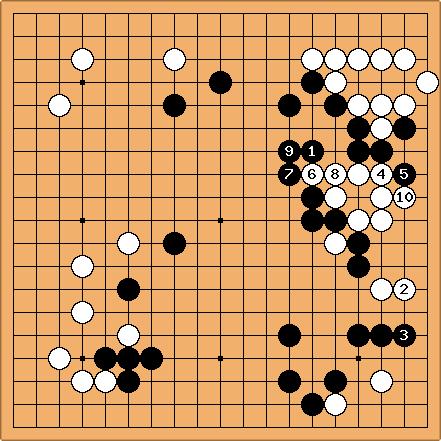 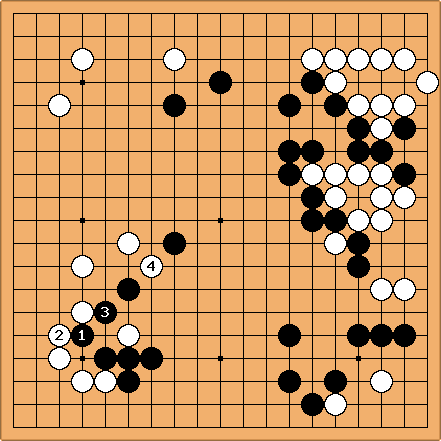 The black moves at

serve as some kind of inducing moves for an enclosing sequence on the left side. Takemiya forces his opponent in a sequence, which resembles Floris' diagram above.

Again, Black chooses to fall back, sacrificing some stones, but gaining a solid wall. 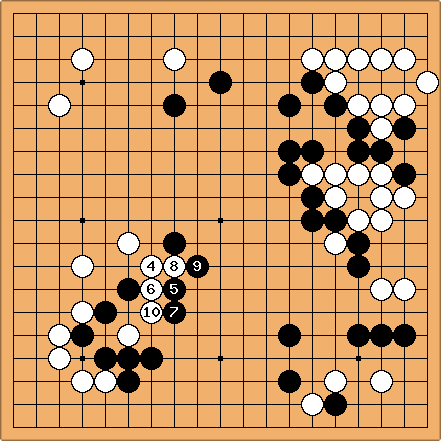 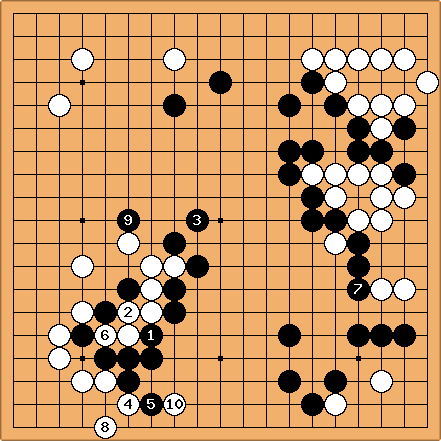 The cool securing moves at

are especially remarkable. (At least for me...) Playing like this seems slow at first sight, but Takemiya started with a very fast development, so he has gained time for these kind of securing moves later.

Another interesting move is

: It reduces a possible white moyo on the top left side, prepares to go in deeper within the next moves and it might even be useful to gain some more points in the center.

Faced with the challenge of W0, Takemiya uses the same scheme again: falling back in order to enclose the side firmly. (You are probably tired of hearing that ...) 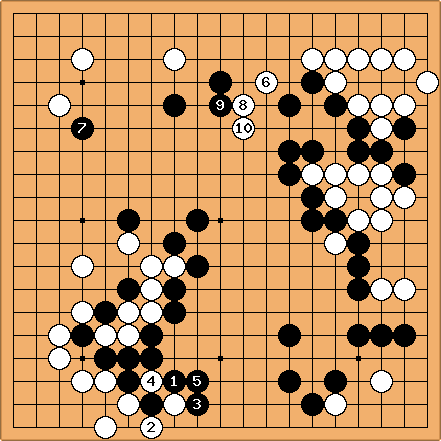 He is prepared to counter the crawling incursion with 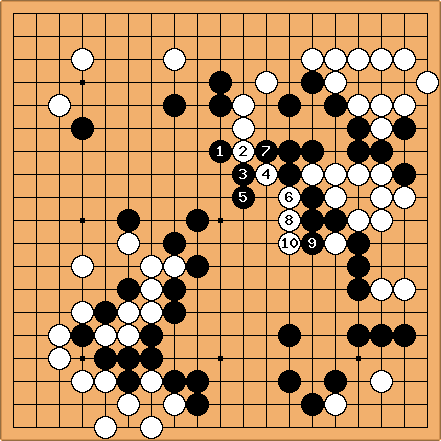 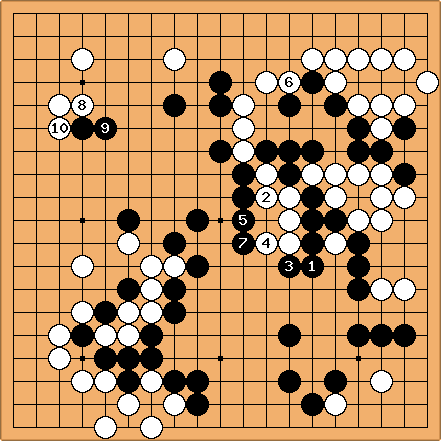 White achieved little with his central invasion. His game was probably lost at that point (but who am I to judge that!). The finish can be found at end of the cosmic game.

To be continued ... (And some comments on the white moves will be added soon...) Klaus: I started adding this game after reading Reference games.