Dave Sigaty: While looking at the page on the Mark II Kobayashi Formation with GoGoD CD and Kombilo, I was startled to find the information below. It challenges a lot of what I thought I knew about fuseki and the coordination between corners.

Consider the following two side patterns: 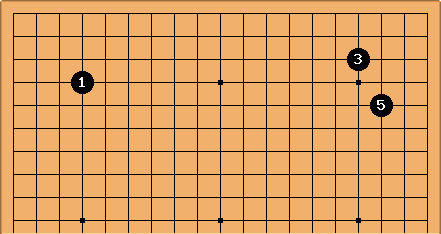 See Orthodox Fuseki. Normal considerations of coordination tell us that the shimari on the right coordinates well with the 4-4 stone on the left. 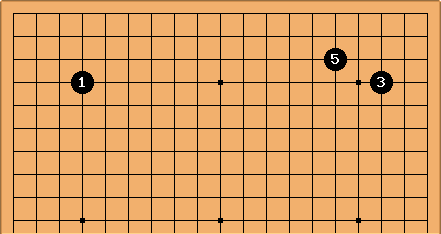 But there is a problem with this simple analysis:
Search Results from July 2002 GoGoD CD

So why does the pattern that lacks proper coordination have the better winning percentage?

You might think, "Hold on, this is the Kobayashi formation so maybe it the results are biased by his results!" Good thought, here are his results:

Well, yes he did better with his namesake. But on the other hand he didn't even score as well as the average result for Black. He even managed to drag down the overall results for the Orthodox but played only about 4% of the games.

What about somebody else? Here is another familiar player famous for his "no nonsense" style.

Again we see the same pattern, less coordination makes better results. So dear readers tell me, should I throw away those dusty fuseki books and use the space for my growing manga collection instead? :-)

In one sentence, my theory. You can play in a less co-ordinated way, but it implies you are going to fight harder.

DaveSigaty: I am wondering about something a little different. I believe that we think a lot about the importance of coordinating our own corners. In the competitive struggle, however, it may be more important to strike the right balance between coordinating our own and limiting the coordination of our opponent's corners. Therefore the value of outward facing formations such as Mark II Kobayashi may indeed exceed that of well coordinated but inward facing formations. This isn't too hard to grasp. What really has me wondering is whether or not Go books (and fuseki theory itself) are biased toward coordinating our own corners simply because it is easier to describe. We can more easily control our own formations than the combined formations between Black and White. The named fuseki are normally derived from the Black stones only (in some cases the White stones but normally they are receiving the same name that arose from a Black formation). So to what extent are our preconceptions based on the preponderance of material that we read, where that preponderance may reflect factors other than actual success rates?

Charles There are several reasons for treating a fuseki book as something to argue with. There is is a relatively new Kato book on the Chinese from the Nihon Ki-in - I started to want to debate it, just turning over the pages. But to pick up Dave's point: it is good to learn co-ordination (which is an aspect of strategic connection) because the stronger your opponent, the more you need to have it. I'm sure the very top players are well aware of all that, but you can't win big titles just with good orthodox play. That only takes you to pro 9 dan level. I might settle for that, though.

togo: I would like to second DaveSigaty; regarding joseki and general play we already learned that influence comes before territory. It seems natural that this should be true for fuseki.

togo: In another line of thought I always wondered, that the stones might be well coordinated in Orthodox Fuseki if black plays next beween them; but generally white wedges and after that I do not see any special coordination. 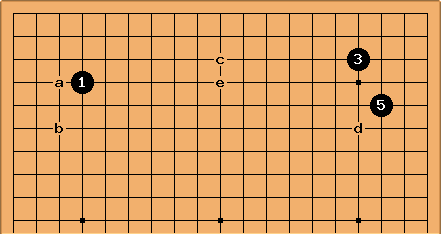 ? Traditionally it does with a , because it aims at a pincer. But White is unlikely to give Black a pincer on the top side. He is more likely to approach at b or play a wedge at c or a shoulder bloat at d (Go Seigen's move). Of course, a Black play at e works nicely with both corners. :)

Bill: Here White will be less inclined to play a wedge. At the same time Black's prospect for development on the top seem less. Perhaps Black has more of a claim to the top than in the first diagram.