Some things this changes from Japanese counting:

There are almost certainly details to the counting which I have not listed here, but this gives you an idea of how it works.

I just remembered that I once heard a description of the rules of WeiQi which stated that the two spaces that a group used for its eyes did not count as territory (i.e., that a player's score was all the spaces that they could place stones on). This scoring system has the nice feature that splitting your opponents stones into two groups makes them lose at least two points. Can anyone verify whether this is a feature in current Chinese scoring? --FCS

I believe this went out of general use in China in the early part of the 20th century, presumably because the strong players were learning from Japanese sources.

The rule about "not counting 2 eye spaces" is from the ancient Chinese rules. In the ancient rules, passing is not allowed -- this translates to the "don't count the 2 spaces for eyes" rule (AKA the "2 point group tax"). John Fairbairn could probably give you more details about this history.
--JonathanCano

See Ancient Chinese Rules And Philosophy for more on this.

I don't think the two point 'tax' is equivalent to disallowing passing (if you mean that you lose if you have no move other than passing). In the diagram shown, White has three points after tax, while Black has four. But I think White can win the no-pass game, whoever starts.

In the position above, white has played 20 stones (that we can see, perhaps more if there have been captures) and black has played only eleven (again, 11 that we can see). Also notice that W occupies much more area than black. While black has more "Japanese" territory in the diagram above he white must have at least 9 prisoners (since black is not allowed to pass). By either Chinese area counting or Japanese territory counting white is way ahead and should win so saying that the diagram above proves that "2 point group tax" does not equal "no passing allowed" is false.

Of course black and white both have the same number of groups above (1 each) so any possible tax cancels out. A proper counter example to my claim would probably have an uneven number of black and white groups. 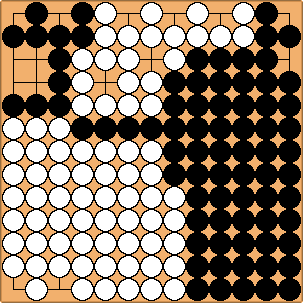 No. Consider this version on a 13x13 board. Each player has two groups and 77 stones. White has three points after tax. Black has four. Black to play, White wins.