Here is an example, step by step, of Chinese counting. This will use the half counting method, where only Black's stones are counted.

This example game has just ended with two passes. 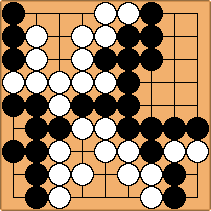 Prior to counting: Note the territories

The players agree that: 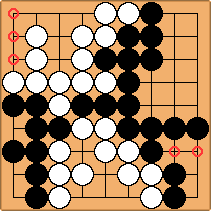 Prior to counting: Remove the dead stones

The diagram shows circles where the dead stones were removed. 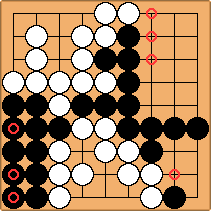 Black's empty areas are made to be multiples of ten. On the right, four stones are taken away (and put in Black's bowl) to make the empty areas total twenty points (3 × 5 + 5). In the lower left, which is too small to make an empty area of ten points, the three empty points are filled in with stones from Black's bowl.

The added and removed stones are marked with circles. Notice that it wasn't important to keep the borders of Black's territory strictly black, so long as you don't confuse whose area each is.

Black remembers that there were twenty points in the empty areas. 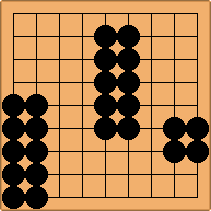 The black stones can now be counted by grouping them into groups of ten. At this point the white stones can be removed from the board, or simply slid to one side of the board.

Black has twenty-four stones on the board. John F. Chinese counting used by Chinese players in Chinese magazines uses Chinese ways of reporting the winner: Black wins by 3.5, not 7, unless you specifically say you are mutilating the Chinese system for a western environment.

Planar: Unless you are trying to cultivate ambiguity, you should refer to this as 3.5 zi, not 3.5 points.

blubb: Even though probably in the west, the majority of players is used to think of points the Japanese way, you may also explicitely indicate that you`re referring to Japanese points by using the term "moku" to make it clear.
Regarding the counting technique: I, personally, prefer to count the supposedly smaller area row-by-row. (To make this easier, prisoners can be taken off before). Instead of two players independently messing around with the board, the counting procedure gets supervised by four eyes. That's very fast and can be fully re-examined, since no stones are moved at all. But anyway, de gustibus non disputandum.

Robert Jasiek: Note that the players' agreement is not part of the counting. It is part of a game phase before counting. Chinese Counting does not require rules that refer to life or death. Only some special examples like the Chinese 1988 Rules suggest such an agreement.