Started playing in the late spring of 2002. Currently bumbling along trying to learn how to play this game...

Plays online on the NNGS (ccwills) and KGS (cheyenne and jorj) servers I have been playing mostly on KGS lately.

First encounter with GO was when visiting a friend's brother at MIT in the mid 70's. I was fascinated by the demo 9x9 game that I played. However at home, I couldn't find anyone interested in playing or learning.

My next encounter was in the mid 80's when I stumbled across a computer version of GO in the early stages of the world wide web. I still didn't fully understand the game enough to play against even this simple program.

Finally in the spring of 2002, while surfing around, I stumbled upon an online GO server, and from there some very kind people who helped plant the seeds for understanding the game. I also discovered a local GO club and some helpful players there.

Entered an AGA tournament in Denver as a 10 kyu (based off some recommendation from one of the dans from the local club). Won my first game (4 stone handicap against a 6 kyu), and was told that I stronger then 10 kyu by my opponent. However I then proceeded to lose my next three games (against an 18 kyu -- 8 stones is tough and then two other 6 kyu's).

May 2004 Created a new account, jorj, on KGS to try out new ideas and experiment with

Mar 2004 Have been using the kgs accounts jorj to play and the cheyenne for reviewing (cheyenne is left as a "-" account). 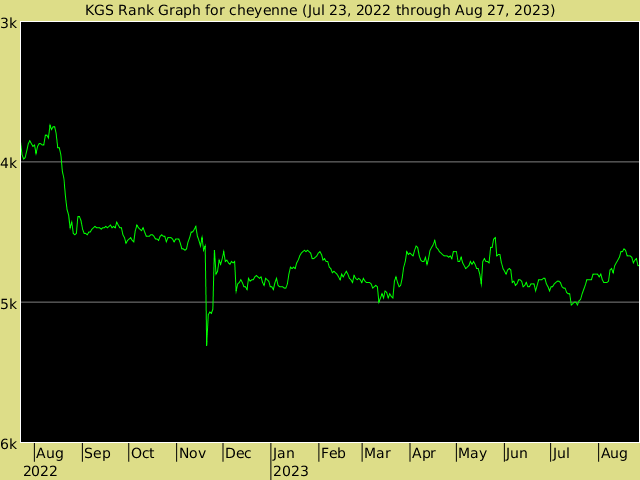