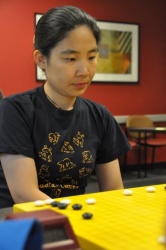 At 10, she won the 3rd place in the 1st China "Child Prodigy" Cup Go Championship.

At 11, she became the only female Go player in China honored as a "female prodigy" of Go.

At 12, she entered the Shanghai Youth Go Team.

At 16, she entered the Shanghai Go Team, and won the Team Championship again in the 1990 Chinese National Go Championship.

At 17 and 18, she won the silver medal twice in the Chinese National Go Championship.

At 20, she entered the Shanghai Jiaotong University, leaving with a bachelor's degree in international trade.

During and after her time at university, she was invited to be the judge and guest commentator of many international Go competitions. At the same time, she was also invited to be a professional Go teacher at Shanghai Ying's Go school. Several of her students had won championships at different levels in many national Go tournaments.

In 2004, she was invited to be the chief judge of the 21st World Youth Goe Championship held by the Canada West Go Association in Vancouver.

In 2008, she was the coach of the Canadian Go Team for the 1st World Mind Sports Games (WMSG).

Also in 2008, [2] she became the President of the Canada West Go Association.

In 2010, she successfully organized the 33rd Canadian Open Go Tournament (Vancouver) and was the representative of North America in the 1st Bingsheng Cup World Women's Go Championship.

On 11 December 2021, she is to play against North American youth talent Val Lewis in the Next-Generation Exhibition Match event.

[1] According to her page on LinkedIn.

[2] Date from her LinkedIn profile. The article originally said "2009, Be the President..."