Solution to Problem on BobMcGuigan 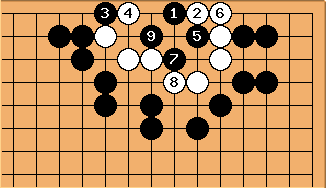 If White takes one stone at a instead of playing 6, Black plays b.

, Black gets a nakade with a. 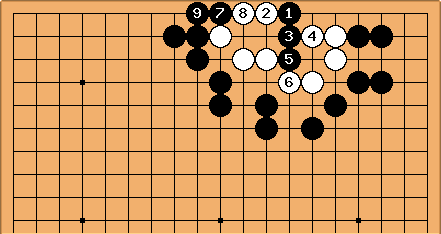 jvt: Beautiful problem. I wonder if White can get a ko like this?

Starting as in variation 1b, White plays

at a. This was suggested by Tsukamoto Chiaki on r.g.g. It is similar to variation 1b above.

, then Black can only play the ko at a. No other move will work. 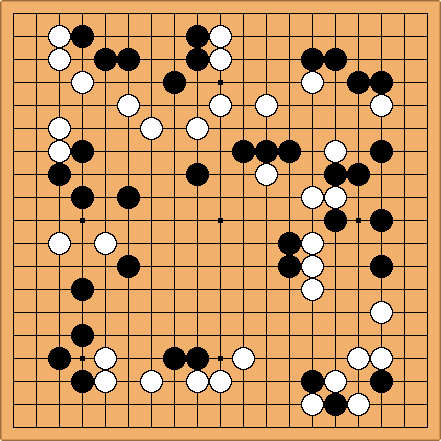 DaveSigaty: This position comes from game 3 of the 8th Meijin Final between Cho and Otake (Black), 1983-09-28. The black stones in the upper left match the problem but the surrounding stones are different. Cho never tried to kill Black. Did he miss a chance or did he correctly read out that Black lives?

BobMcGuigan: This game has a published commentary by Hane Yasumasa 9p in Go World issue number 34. Hane points out that Black can live unconditionally but only in a way that helps White on the top. Hane felt that Cho missed an opportunity. Without quoting the commentary in detail, Black has to respond to a white attack at

either by a hane at the circle point, which allows White to play at the point marked with a square in sente, or else Black could answer the white attack at

, Black a, White b, etc. through Black e follow and White has succeeded in playing d in sente; which, according to Hane, will be important later in the game.

BobMcGuigan: I think it is interesting to see how the problem position arose. It started with a very common joseki sequence, as in this diagram, and the position at issue in the Cho-Otake game resulted from natural middle game moves around this shape.

Charles A closely related position arose in a game Zhao Wendong-Xie He (B) 1995-01-12, first from this sort of shape:

and then later fighting to give:

I won't give the details (and the players were then strong amateurs), but the interest here became how to handle this in the endgame. Black could still run out at a; meaning that the attack with White at b wasn't going to kill. In the end White did take profit with an attack and send Black out into the centre.

This is somewhat related to connecting along dame and one group wins.

jvt: Do you have a reference to the book / page by Fujisawa Shuko where this problem comes from? I'd like to add a link in Errata In Books.

BobMcGuigan: It is problem number 162 from the book "Shuuko Sousaku Tsumego Kessaku Shuu" by Fujisawa Shuko, published by the Nihon Ki-in in Japan, 1980. The title means "A Collection of Original Tsumego Masterpieces by Shuuko". I can't resist mentioning that the word kessaku (masterpiece in the title) could, in other contexts, mean "blunder".