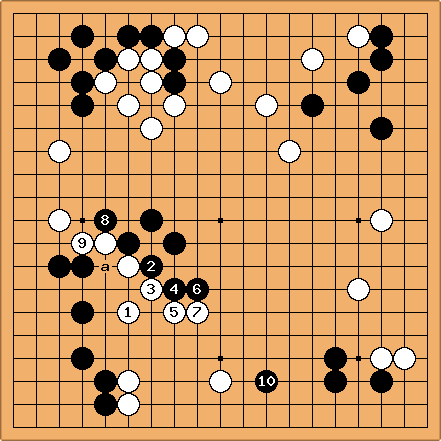 has to connect at a.

Orcun: I can not agree,

AE (Andre Engels): I don't agree with Orcun. After

at 2 completely destroys the shape of the black stones. A black move at 1 is not extremely big. An alternative to connecting at a would be destroying black's shape at

: It would be good for black to play atari at a first - cutting in sente. 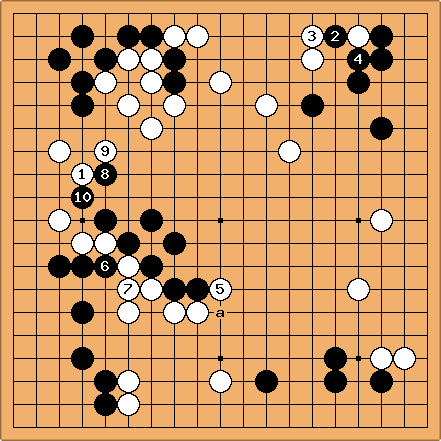 : Orcun: I could connect by 9 but my left group was very weak. So I came up with this move which I believe both strengthens the left group and connect with two alternative ways. One is as it occurred, the other one is a bit complicated with

at 9, which I believe is the correct move for black.

: Orcun: I tend to like this kind of moves. In the early days ( two weeks ago :) ) I used to refuse to consider my moves as mistakes and try to rescue all of my stones. This move brought me the sente which I know is a lot more important than 2 points.

, the white stone is already captured and cannot be rescued. But for the current situation,

is way too small.

: Orcun: I could have connected but

at a seemed BIG.

AE: a is probably better than

, not leaving any weakness behind.

: AE: This is bad for black, she is just helping white connect. 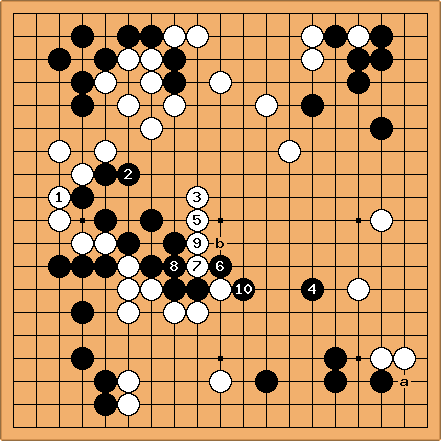 : Orcun: It was all that I could think of at that moment.

is a very strange move. Better just take a large endgame move, for example at a. Locally, b seems to be best. 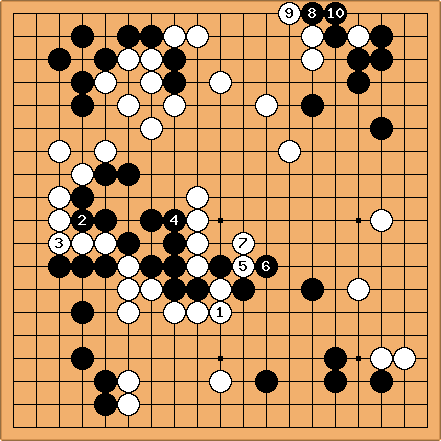 : AE: Not good. Everything in this part of the board lives, so this stone is not important. 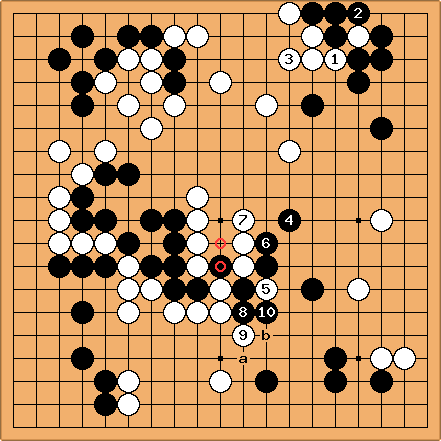 AE: I don't agree. Again, the stone that is saved by that move is not important. And if black chooses to save it, 5 is better.

at 7, then the center is in danger, over-concentration near the

at the circle, and black has possibilities like a and b for the future. Still, arguable though.

at b may be a better option.

at 8, white has no need to answer a black move at 7, and certainly not at the circled point. Note that capturing at 8 gives a liberty! As for over-concentration, white is just as overconcentrated now.

Orcun: You are right, I have totally mistaken there.

: Orcun: Worked a lot for white because of

in the following diagram. 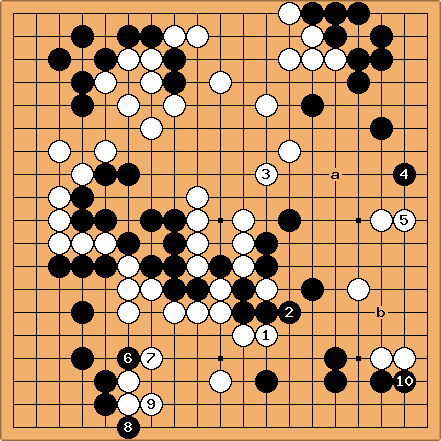 : Orcun: Useless attack. I was expecting a possible disconnector near a. This may have caused the weaknesses that brought the end of black. Is my response

correct? I would not question if the bottom side was secure.

AE: And it seems black has lost more than she won with this sequence. Before she played here, there were more possibilities.

Orcun: I am always late for these kind of moves. I should pay more attention to this. Can this move be the starting move of themacroendgame?

is so big that it makes an invasion at b possible. I could almost say that

(Unfortunately I am now too sleepy to elaborate further now.)

Orcun: You can be right. I can not find a good response to b. This was something I completely missed, Thank you very much.