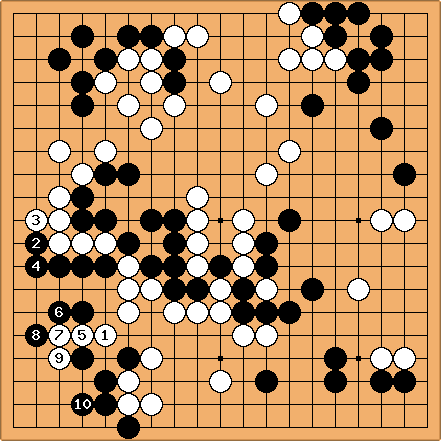 Orcun: Can someone explain me what happened? :) Really!

is a mistake: must be at

and then Black may keep any loss small.

is also bad, not doing much (probably not anything) useful. 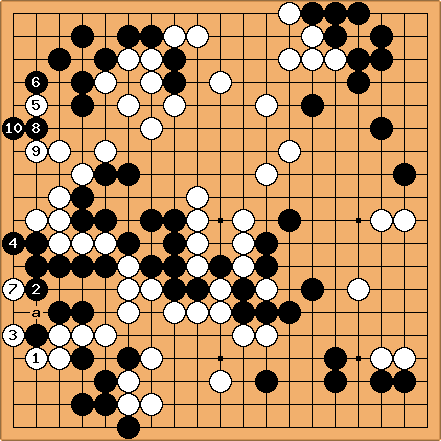 : Orcun: As I have said in a previous game, I don't like to respond a mistake quickly. Why not

at 7 which is the killer? I don't really know but

at 7 saves the group but things get complicated in corner, but not too dangerous actually. I would not play this against a human opponent.

AE: So why do you play it now? There's no reason not to just take the money and run.

: Orcun: Should definetely be at 7.

should be at a. You know why?

at a is better. But it does no good after

: Orcun: I already was not interested in the corner, I believe white should resign now ( GNU Go does not have the ability to resign right now ) . Am I right?

AE: I assume you mean that black rather than white should resign, no?

Orcun: Oooops. Or may be white should resign not to make black more sad.

Orcun: You may not comment from now on but I would still appreciate it since there are still moves I am not sure of. I am not very good at the finnishing moves. Thank you anyway. 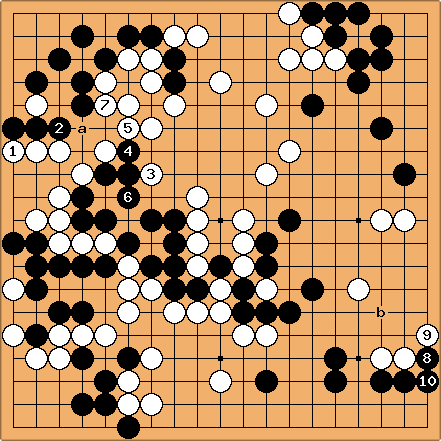 : AE: a is now 3 points with double sente (black threatens to kill the group on the left, white to capture three stones, so it should be played by either as soon as possible.

: AE: Bad. This action removes the possibilities that black has at b. It's probably too hard for the computer to read this out, but black should nevertheless try, given that he's far behind. 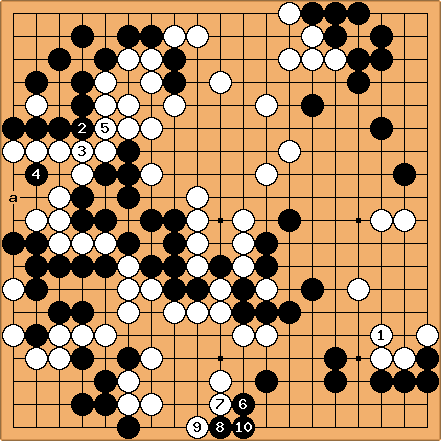 : AE: As noted before, this is double sente. However, black should continue with

, followed by white 4 - this is one point worse.

vst:Black at b is a huge move. 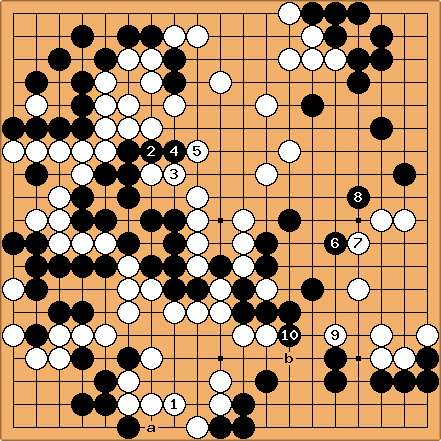 : Orcun: Was it too safe? a seems the better option now.

is correct. Because the black stones to the left are captured anyway, this move is as many points as a, and it is safer.

Orcun: Yes, as you mention in the next part, I make use of

: Orcun: I shold have considered b first. Still it may not be good.

AE: b looks like quite thin shape; I think 10 would have been better. 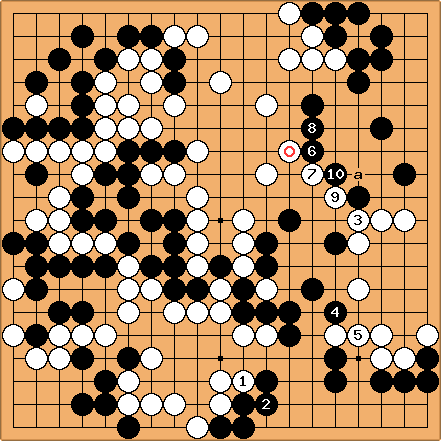 Orcun: I was so concerned about connecting my groups. Don't ask why? There is no reason, just to make

more meaningful maybe, or just to see if I could.

is wrong also, as it induces the double atari at a.

should be played at a.