This happened to me, (17kyu?) as Black in a six-stone handicap game yesterday. 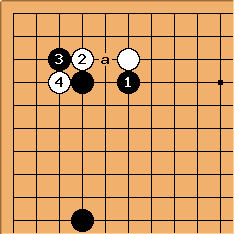 I expected to play tsuke-nobi (

made me think "Ha! Interesting" but the cross-cut made it a little too interesting (i.e. too complicated for me to deal with at the board).

at a and while it didn't cost the game ( :-) , the white player told me after the game that he played

to gain speed and

at a had helped him with that goal. He also said that it was joseki until

I still feel uncomfortable about it. Your analysis and comments are appreciated. 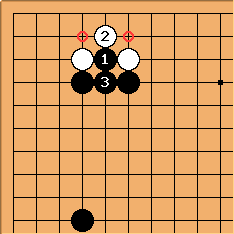 Charles In this kind of position, play the bulge shape

and don't think too much. It must be good to give White those marked cutting points.

Also, don't believe it when people tell you about joseki!

mAsterdam Thanks again, Charles. I'll confront white with your remarks next time I see him. Joseki? Schmoseki! 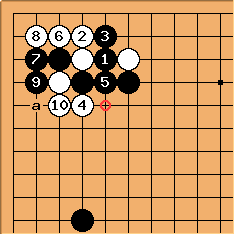 Dieter: Let me guess what happened next. After

is a one way street. Then if

White will lose her top stones. There is a.o. a net involved.

See Net Example 10 for detailed discussion on this. 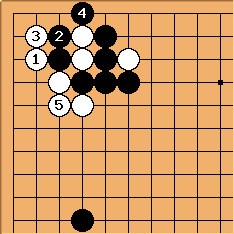 If, on the contrary,

here, Black loses his corner but he gains sente. I assume this is what you played in the game.

mAsterdam: Sorry for not answering your guess. I couldn't remember. Later I asked my opponent, but even together we could not reconstruct the way we handled it. We both felt Black could have done better locally. I have to develop my game memory. This week I practiced writing the game down while playing - that also would have helped the analysis afterwards. 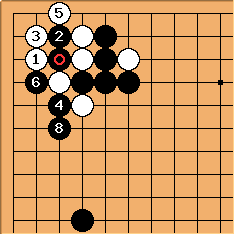 and take the outside with