BlueWyvern - I've got a bit of an odd question here. I was on KGS last night going over a pro game. I was somewhat nervous because there were like 10-15 people watching, all of whom were lower than I was, and even though I'd been looking at the game for about a week, I still doubt I'm qualified to comment on such a game. :-) 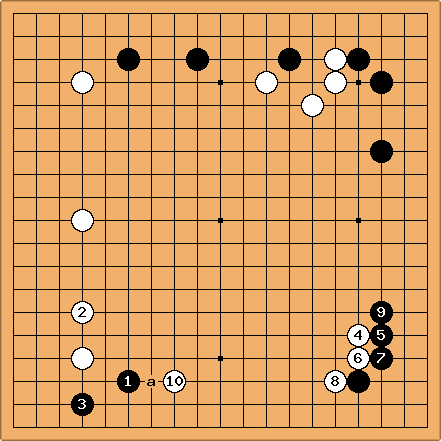 My problem comes from this position. There was one guest who was watching the whole game, then contended that "he had insight in this game, and that nowadays White would surely play a". 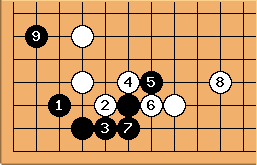 This is the result from the actual game. If you plug this position into the whole board, it has a very distinctive look to it. That I'm sure many of you will no doubt recognize. 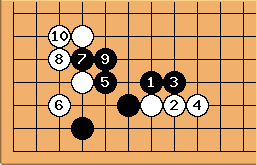 I politely disagreed with this guest when he claimed that White would surely play this nowadays, thinking that with the hane of

, the result would inevitably look something like this, and modern as the result may be, it just doesn't look like Takemiya to me at all. What kind of disturbed me though was that the guest then sent me a message to the effect of "Oh, what do I know, I'm only 4p." then immediately logged off. Am I missing something here? Is he actually right? I don't think I was rude, because he never identified his rank, but still.... This has been bugging me for a good half a day straight, as I've been in the position where someone a good 10 stones below me refuses to listen to reason.

HolIgor: Nowadays play at a is a fashionable variation, which does not mean that

was bad. That is Takemiya style, so both of you were right.

Dieter: We will never know whether he was truly 4p. What we do know is that, suppose he was, he didn't intend to teach you, because otherwise he would have backed up his opinion with arguments that make sense to someone of your rank. I'd say, get it off your mind.

On the other hand, it is not because a position faces the center that it is something Takemiya would play and neither is its inverse true. There is much more to Takemiya than facing the centre, only I do not really know what. It doesn't deny us to adore central oriented strategies though, whether truly Takemiya or not.

BlueWyvern: It's not only the center facing position that makes the original result seem more like Takemiya, he also loves connecting all his stones up, and the first result allows him to link up his left and right sides, where as the second result has him firmly split. Additionally, Takemiya style gives preference to fighting and the original result seems to me to give white a much more aggressive posture all over the board.

Charles It could be a perfectly valid comment on what "they play", for example in Korea; and still, as Dieter says, not helpful on a teaching level. The joseki (at 4-4 point low approach high extension, slide, attachment) hasn't been used for this lower side formation, as far as my database knows.