This is from a game I recently played. I ended up building quite a large center as a result of my opponents low play (not couting eyespace in groups in the center, he had only one point of territory on the third line at the end of the game). My question is what to do when my opponent starts to jump in at

in the first diagram. --BlueWyvern 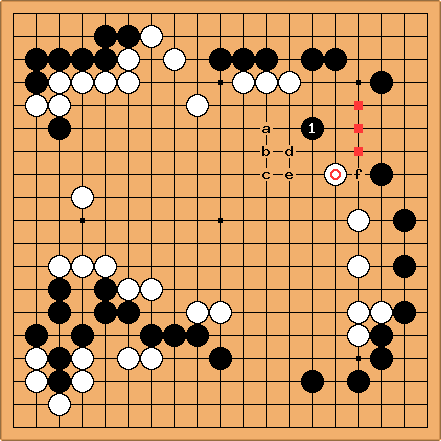 When Black jumps in with

, I immediately narrowed down my responses to a through e.[1]

At a felt too slow, and c and e felt too passive. So I had to decide between b and d. While d clearly closes off more territory, when I read ahead, it seemed to leave weak points that made me a little uneasy, with such a big opening in the territory still left at the bottom, so I decided to go with what felt safer even though it took less territory.

I'm not sure I did the right thing though. I've been trying Takemiya's style a lot lately, mostly screwing up, although this is the only game where the end result was a big center.

Charles My feeling is that White got an adequate result. Note though that if White had managed to force Black earlier in the region of the marked points, that could have made quite a difference to the chances of cutting off

dnerra: Alternatively, I guess (as I don't know how you ended up in that position) that

could better have been played at f instead. If you add the exchange "Black plays hane above, White extends to

", White would have a much more stable base for blocking

was played as a cap to an extension as move 26. I don't think attaching at the time would have been better. 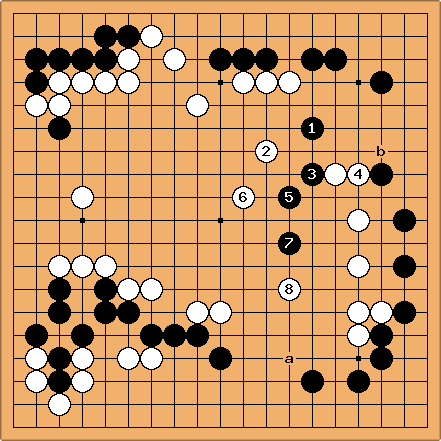 I defended in this manner.

, it seemed acceptable to me because the left half of my framework is so deep and solid, that any attempt to invade would be suicidal. From my calculations, I was making somewhere in the neighborhood of 50-60 points which felt adequate if I continued an aggressive policy of reducing at my opponent's weak points, like a[3]and b.

dnerra: I am a simple-minded guy: 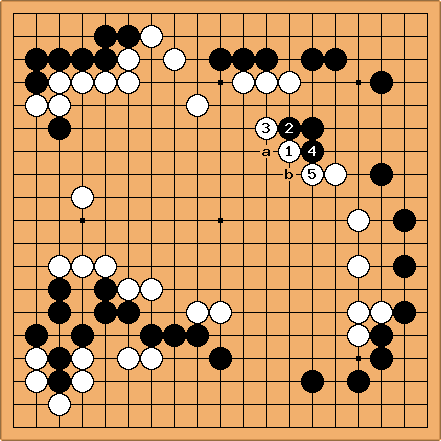 Cutting at a does not lead anywhere. And I'd be willing to bet the game on capturing Black if he cuts at b. 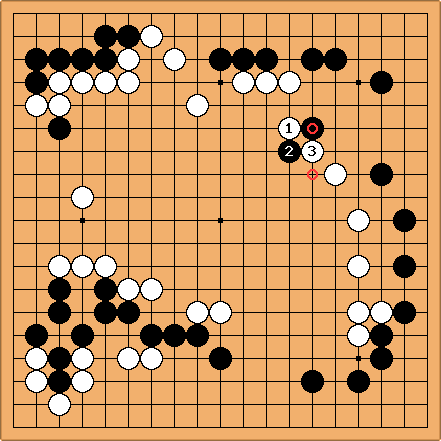 Charles It is worth at least looking at this

. This turns out well if Black tries

and White cuts with

I'm not saying that it is better, in fact. My reading is that

or the circled point are good for Black. On occasion one can play forcefully; other times mean one should employ the kind of dropping back suggested.

Charles But that saying (Don't use thickness to make territory) certainly doesn't apply to the endgame stage.

Charles I think a as marked isn't the best point here. 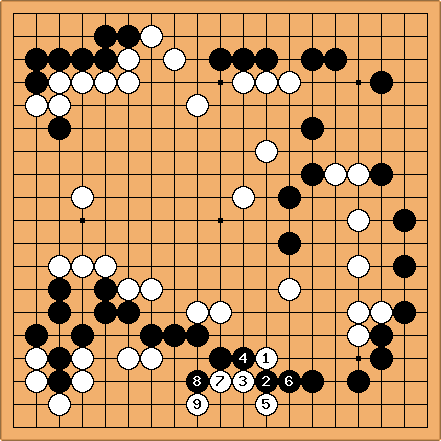 As White in this position, I'd be aiming at this sequence. 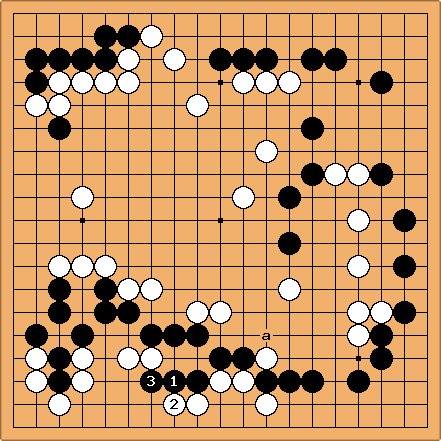 Hmmm... Is Black bad here? White has problems in the bottom and if/when Black captures with a, White's group on the right looks thin. Dave 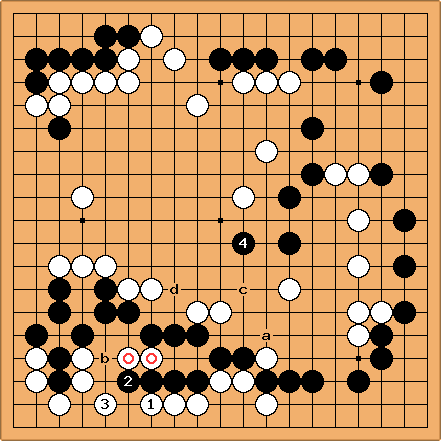 Charles Not a question of White being able to treat the

stones lightly, and White at a being left as a good play?

Seems to me White is taking profit here. The middle of the lower side looked to be Black's; and now White has something there.

Well, White now has to take her chances in the centre.

Dave I don't know but White seems to have given Black the choice of a or b now. If Black just starts in to the center with something like 4 there is the thinness around c and the weakness at d to worry about. Compared to the original diagram White has let Black keep it too interesting perhaps :-) 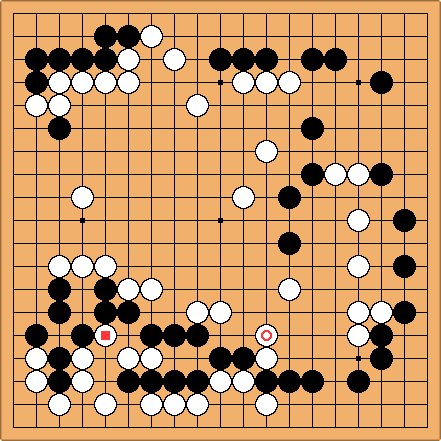 Charles White ought certainly to think carefully before initiating this sequence.

The combination here of

would set me dreaming, though.