I ran into this little situation recently on KGS. I was White. --BlueWyvern 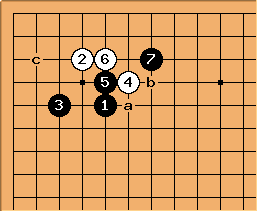 seemed like a fairly reasonable way to deal with the corner, and after

, I was expecting something like Black a, White b, Black c, or maybe an extension. Instead I got

which seemed to me like a brutish overbearing attempt to spoil my shape and make me heavy. 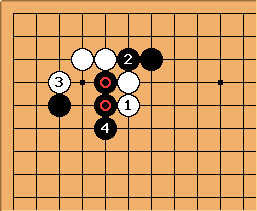 trying to threaten the marked black stones with a shortage of liberties. 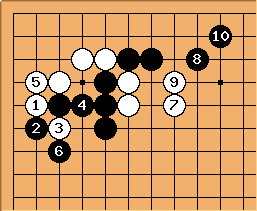 I finished up like this, but somehow I can't help but think I may have gotten the short end of the stick here. How could I have handled this better? 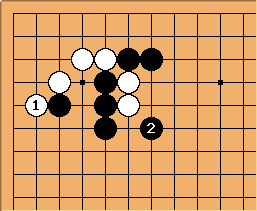 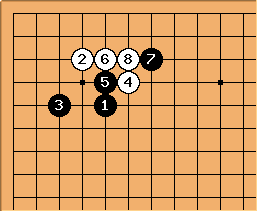 is weak. Also, the exchange

looks pretty stupid for Black, doesn't it?
Actual go proverb: There's no fool who doesn't connect to a peep.

Charles Matthews I agree with Bill. That proverb would suggest that this connection ranks with basic instinct play.

also violates the proverb Do Not Peep At Cutting Points. If black isn't going to cut with

doesn't make sense (ignoring the issue of whether cutting with

is reasonable or not in this position). 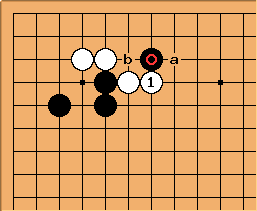 That (I think) is not quite right. The other reply worth considering is

here. If Black answers at a and White then connects at b, White should be entirely satisfied (Black is heavier and has little prospect of connecting the upper and left sides). 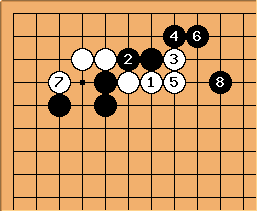 What is worth spending time considering is this variation. Here White is cut and 'forced' into playing

(White is probably happy to play here, though). White has the corner: is this a develop on both sides scenario welcomed by Black, or a one weak group between two scenario acceptable to White?

mafutrct: I dislike this result for white. It is reasonable to assume black getting the superior result (since he played first) but here white is actually forced to play

and still has aji in the corner (making black's left side strong) and the white center group feels heavy. Unless white has a strong position on both the top and the left side i strongly prefer black. So imo even though the alternative move (instead of connecting) is interesting i would just connect normally. The exchange is supposed to be very godo for white, since the cut got fixed, white got more liberties (no aji at all) and black wasted a stone.

I think the initial comment about spoiling White's shape may involve a misconception. In the initial diagram

isn't that good a play - almost as poor as a raw peep - and probably doesn't bring any advantage (it's a mistake to shed at about 3 kyu level). 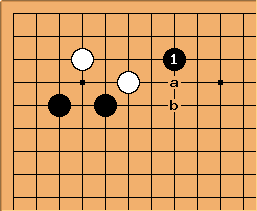 From the point of view of shape,

here makes sense if Black has enough strength in the upper right to back it up.