BobWhoosta: This fuseki came up in a game. It's a hybrid of the Kobayashi, and I want to see what ya'll would do. I ended up losing the game, but at one point I feel I was ahead (made a VERY serious error that lost me 20 points and then ended in ko for life in another corner. Lost by 15-20). 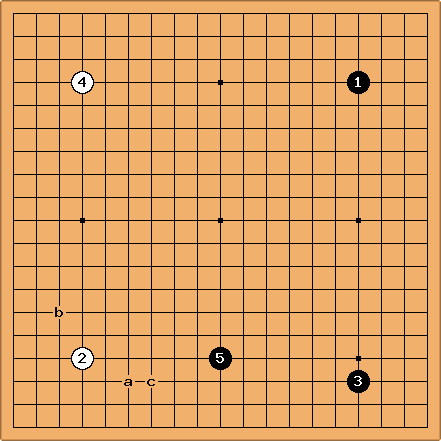 Now, standard is the a-b exchange first, but my opponent did not do this. I know that allowed me to play at c, and that might have been best, but I decided to approach as in a standard Kobayshi like so: 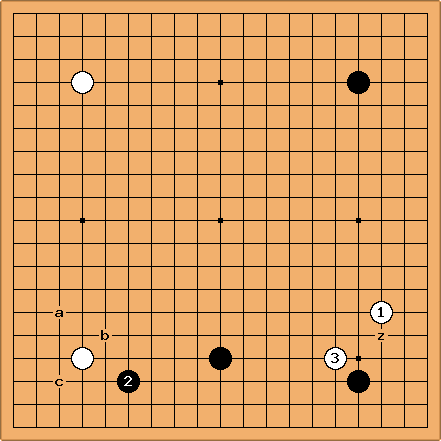 make the large diagonal haengma which is ordinarily a light way to play in the opponent's sphere of influence, where it can be profitable to let your opponent cut the stones apart by developing from the other one while he's doing the cutting. This isn't the situation here, so the

combination looks awkward to me. If

And this was my idea: After black makes the approach, look forward to a double approach later, after which white will get sente (something like a-b-c tenuki). Meanwhile, white presses black low on the side he's trying to develop.

The question: Is this idea good, is it optimal, is it interesting, is it ugly, or are there simply better and more simple ideas in the position???

And was c in the first diagram so obvious that I just should have played that? It's kind of reverse sente, and after the double approach on the lower left corner black will end with a position that is difficult to invade, so.... 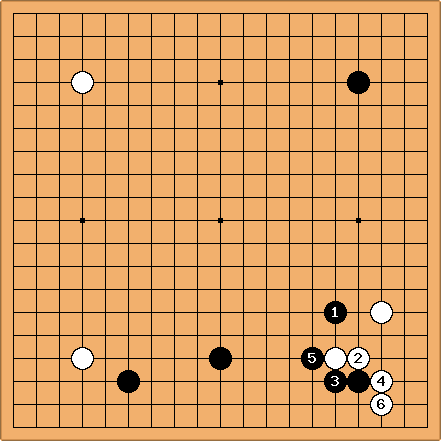 I continued something like this (although it doesn't look exactly like the game, white gets the corner. This position just looks better for black than the game). Considering the WRONG move of

, was there a more severe/better option for white?. In one sense this is better than standard Kobayashi (in my opinion) but in another sense I could have achieved something even greater by cutting off

and maybe even letting black into the corner. 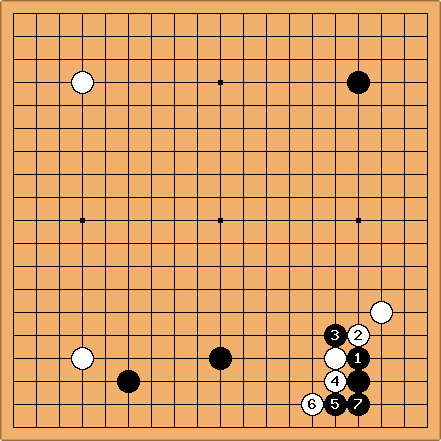 First of all, Black has to cut. White has no good way it seems to deal with 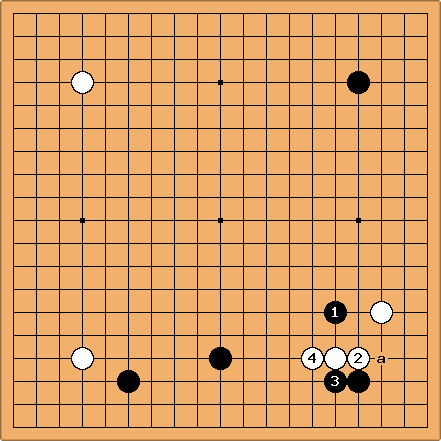 is bad shape. White's table shape is compromised by

persists the cut, Black gets a and forces a empty triangle. If White picks a, which is probably best, Black at 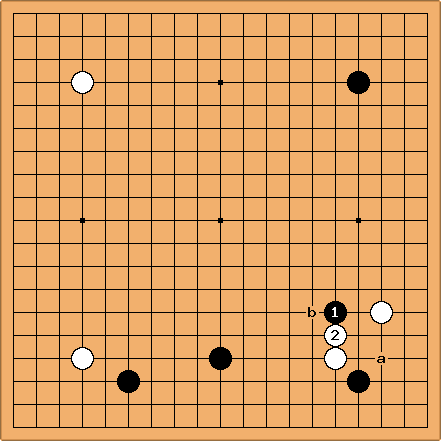 So, it is probably best to play here, aiming at a table shape again with a, or, if Black compromises it, a hane with b. However, ... 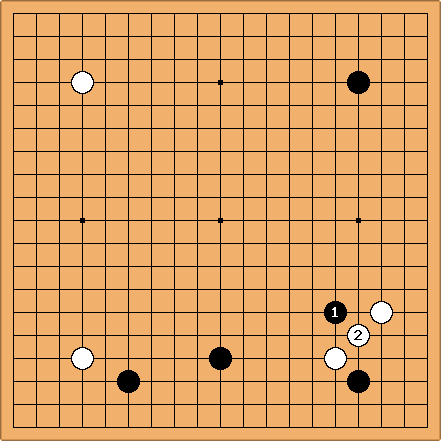 ... the simple move, connecting your stones and cutting his, is difficult to prove inferior.

I think becoming very strong in basic technique or haengma is almost a requirement before you can really start taking advantage of well positioned opening stones. I can tell you that even at 2d strength, the choices in the opening don't affect the game not nearly as much as endgame mistakes or middle game choices. The middle game in particular is full of technique and tactics which don't carry encyclopaedic names like Kobayashi, but are all the more important. Looking forward to more questions!

BobWhoosta: I guess my followup question would be: what would you play there? It would be easy to transpose into a "normal" kobayashi, but I was looking for an interesting followup on the bottom right. Maybe a different approach to the komoku stone that takes advantage of the fact that black has failed to make the standard exchange at the bottom left??

I agree with your point about techniques. You can build the MOYO OF DOOM in the opening, but if your opponent can make sabbaki in it, you lose. So following up with good play in the middlegame and endgame is the only way to actually reap the rewards of good opening play. However, I find that in general my fuseki is naturally strong (my technique can be questioned at times...), and I love to pore into these kinds of questions, if only for curiosity's sake. I find fuseki one of the most fascinating areas of go.

In the end, it seems that c (first diagram) would be the easiest, simplest, and best.

tapir: I would attach at 3-3 to the 3-4 point in the lower left if Black ignores my far low approach.

Dave: GoGoD has about 30 examples of this Black 5. Yi Chang ho, Yi Sedol, Kobayashi Koichi, and various others have tried it out with reasonable success. The most frequent reply has been the distant low approach in the lower right. There are no cases of White answering

with a large knight's play (2 small knight's though). Generally speaking, when Black has a stone at K4 he virtually always answers the approach play (98%). In the few cases of tenuki that exist in professional play, White usually attaches in the corner at R3.