BobWhoosta: Hi, I've been purusing the BQM section, and now that I've reached the end, I've decided to add one of my own!!!

In my games I sometimes use the two space approach to the komoku although I know very little about the joseki. I simply understand that it's when you don't want to get pincered. However, my opponents usually do anyway, and I usually attach underneath. My question concerns a response I've been getting lately that's thrown me off. I don't know if it's good for the attacking side, but I make it that way through my "Thank You" style of play. 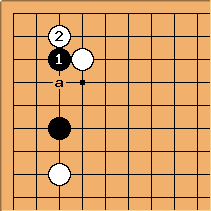 I haven't done much research, but I know the traditional and stable lines that develop after a. I honestly think that

is not a good move, however I believe I've fallen for a classic case of "noseki-itis", that is an inflamed desire to punish moves that deviate from joseki by killing EVERYTHING ON THE BOARD, thereby giving a good result to your opponent.

Anyway, can I get some help please?? 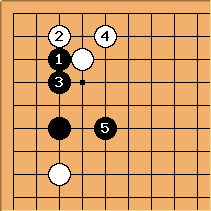 Uberdude It's a joseki, but not very common as it's rather inconsistent with the initial pincer. White usually pincers because she wants the side, and the more normal move at a leads to black taking the corner and white the side. 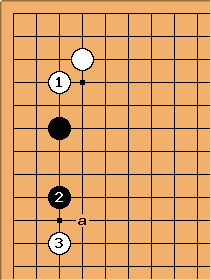 to black's initial approach and then when black makes a 2 space extension white can still make a checking extension as below to keep up the pressure, though black is a bit more spacious here (and could also extend to a instead of

for a lighter, more fast-paced development).

BobWhoosta: Thanks Uberdude. I did not post my failures as they are many and varied. I actually thought the correct response was to descend with the attachment stone instead of draw back, but I could not see the value in it after a nobi by white (diagram below). So I just "couldn't" play that way, and tried both a cross cut and hane. You can imagine the galactic failures that resulted. 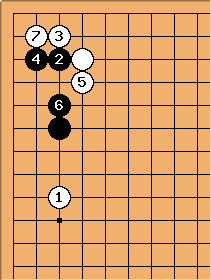 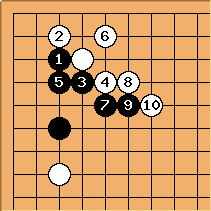 Herman: With the hane at

, you'll probably end up reverting to this joseki, which is normally played in a different order ( 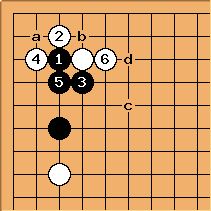 Herman: I don't think there is any value for White in trying the atari

here, as you're just forcing Black to defend his weakness, while aji remains with the cuts of a and b. Black can jump to c next, aiming at the attachment of d. White should defend against that, after which black has good shape and can attack White's original pincer.

BobWhoosta: Sadly, and possibly embarrassingly, I must correct you as to the hane used... 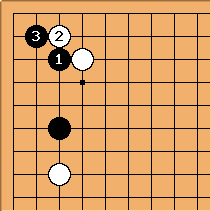 Perhaps now you can see why this didn't end well... 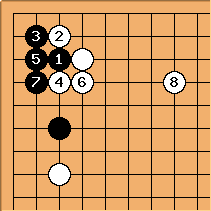 Herman: I would expect this continuation. This is a little too low for black, but not disastrous. 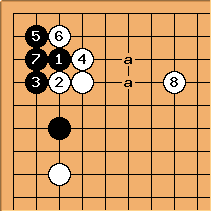 By tewari, we can compare with this 4-4 joseki. Up to

is normal when White has a stone at one of the points marked a. Without such a stone, black should play