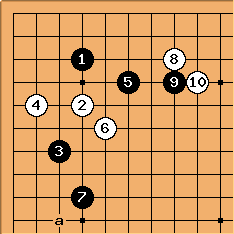 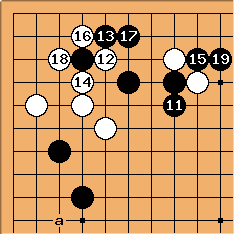 Tapir: I have trouble in understanding the sequence after from

onwards, any takers? Why

and not the cut, why 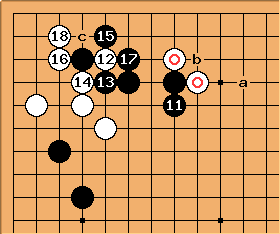 Uberdude: For reference here is the old version of this joseki. (In fact there are some other variations, for example

can be extension at c to stop white taking the corner). Black can then continue by playing at a or b. The downside of a is that white's marked stones still has lots of aji so black isn't thick here. Sometimes white will save them immediately. 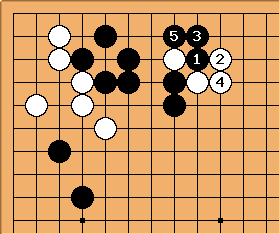 If black cuts at b he is more solid, but white can force him into a rather overconcentrated shape as shown. Note that the white stones on the outside can be treated as kikashi and sacrificed if needed.

So, now lets compare these results to the (newer) joseki in the original question. In the new joseki white's corner is a bit bigger, but black is thicker on the outside due to the extension at

. This extra thickness is generally judged to be of greater benefit to black than the extra points white got in the corner (afterall white is alive in both cases). 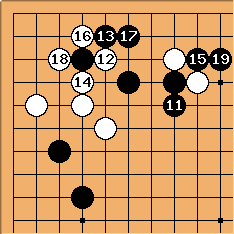 is not the cut is then it would revert to the old joseki, which is not as good for black.

takes a liberty off the black stone preparing the trade. With

, but before doing that black plays

in sente (otherwise he extends at

and white's eyes in the corner are gone). 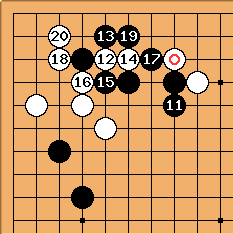 here is not good: it ends up like the old joseki but instead of giving black a ponnuki from capturing 1 stone, he captures 2 and is much stronger. Also the marked white stone has lost a liberty. 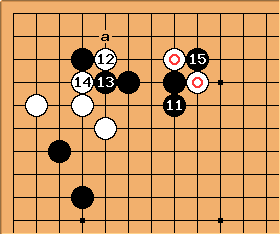 Dieter: Uberdude's analysis prompted me to ask why Black would not cut here with

at a allowed him to do so.

Uberdude: Interesting question, and not something I've thought about before (the previous point about the new joseki being thicker and thus better is something I heard about from others, the following is purely my own thoughts so more chance of error). 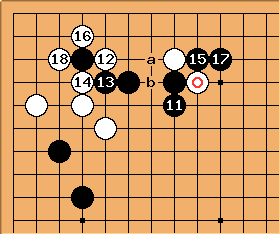 If we assume the similar-to-joseki sequence as below, in which white captures black's original 3-4 stone and black gets thickness on the outside, it is obvious that

is poorly placed as it was played as a cutting stone, but then the other cutting stone was sacrificed leaving it as dame. Black could possibly take sente now, but that leaves white with the option to save her stone at a which is not only large in terms of territory, but also means

is a cutting stone again and could be saved in the future. White can also push through at b for some more profit. 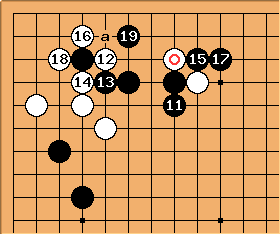 If black defends at

then it is like the joseki, but black has played on dame at

instead of a move with yose value at a. So this is unconditionally worse than the joseki. 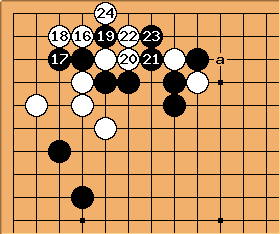 Black may pull out his corner stone, and if white plays

then driving through with

gives black a thick shape in sente. If he extends at a it ends up like the joseki but white has even more points in the corner so that's worse than joseki. Instead black can tenuki now which is a big plus, but white gets the atari at a which is a nice kikashi. This seems a fair result to me. 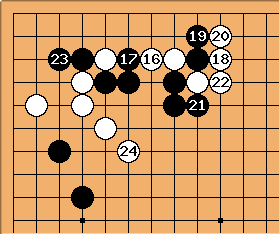 Instead of taking the corner, white may choose to fight by extending at 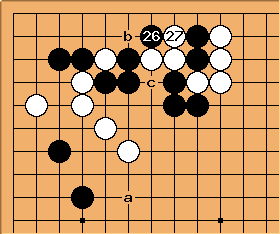 Black can then exchange

. Black will then probably continue to attack the white group on the outside, perhaps at a. However, note that white can capture a stone at b for some profit (and a 2nd eye should it be needed) and if she does so there is some aji of a cut at c. Black can fix this cut in sente by playing atari there straight after

, but would rather not as it wastes a ko threat and gives the wall on the outside more liberties (it's unlikely that wall will face damezumari, but it's nice to keep that possibility). 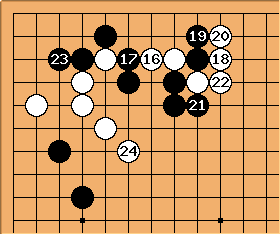 If black had played the hane instead of the cut for black 13, white's extension to

is also possible and the same sequence follows. 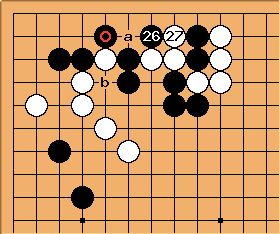 exchange, the marked hane stone is now perfectly placed to stop white capturing at a. This is a considerable gain for black. The downside is white can save a stone at b, but this is just 2 points and is heavy as it makes no eyes and loses liberties. So this diagram is better for black than the one 2 above.

Black refuses to give up corner 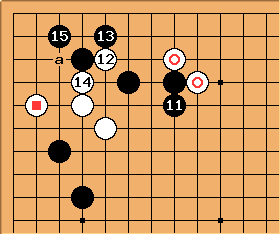 Tapir: What I need to understand most is what happens if Black tries to resist the exchange like this or in any other way? (How exchanges happen and become inevitabe and are prepared to be so is a topic I generally do not understand very well.) If I am Black I feel like I want to avoid this exchange, because settling a medium corner in sente, when Black played first there, looks favourable to White for me. 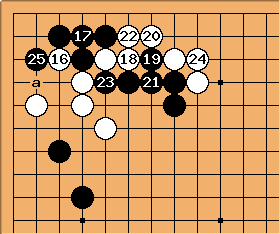 Uberdude: Holding on to the corner lets white split black's groups. This leads to a fight such as shown which look good for white. Black is not even 100% alive in the corner once white plays a. 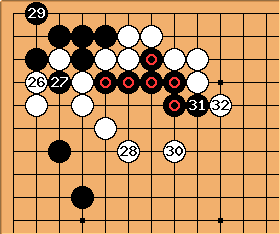 However, white is not alive yet either, so jumping out and letting black live in gote in the corner and then playing another move on the outside to attack black's heavy marked group seems a way to keep the game simple and good for white. 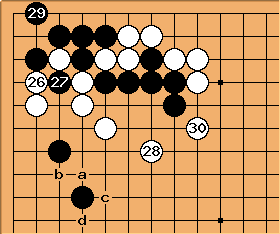 In fact the kosumi might be slack; perhaps white can jump further to

. There are some cuts in the knight's move, but white could perhaps force with the a - d exchanges (which do help black on that side) to patch the weakness.

Tapir: Thank you for your comments. I agree - though I doubt all amateurs read to this point before rejecting the resistance variation. Btw. is Black alive at all after White a? I see ko at best or a bent four pseudoseki = one that allows attacking the outside first, but dies in the end of the game? (I believe some analysis presented here should find its way back to 34Point54ApproachOneSpaceLowPincerSeparate - is CamelCase? disabled?)