How should Black play in 9 stone handicap games?

Kjeld Petersen: I was trying to explain the strategic concepts of Go to a 15 Kyu player in a 9 stone handicap game. And it struck me that Black should use White's invasion in and around the corners to conquer the side territory. Black doesn't mind that White gets the corner in the process, as long as Black gets a larger side territory in return.

This strategy some how takes the pressure of from trying to get the corners. Play so as to devide the corners between both players, and then concentrate on the side territory. 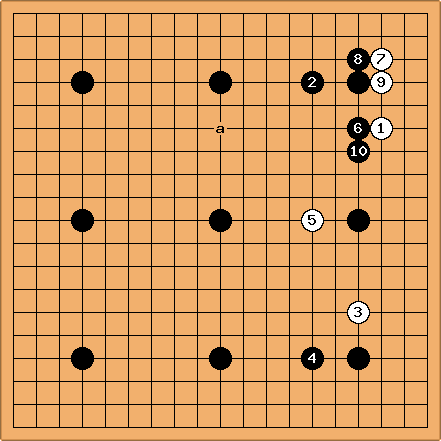 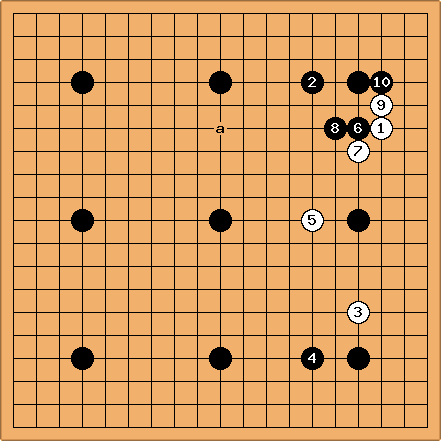 HolIgor: In the first case White gets too little and not much hope for a Black mistake. I think that Black would not do that. Even playing without handicap White would not like to go beneath.

In the second case White is OK and it seems that Black is overconcentrated. Black played against proverbs. First of all Black attacked from the side of the strong group and not the weak group. This may be OK in the handicap game but a handicap game is a training game. I don't think that Black should just go for a win.

is redundant. It would be much better at a.

Thirdly, in both cases White's cause seems lost. Nobody can imagine how White could win at 9 stones. It happens here and there, I know. Yet, whatever impression about the strength of Black's position one has, Black has already given in a little in the case of the second diagram.

And finally, I agree with the main thesis of the page. Corners are not for the territory in the opening. They are for a base. Just small military bases to start the conquest. Later in the game you expand them or make them survive on a small scale depending on the strategy of the whole war. A base may also appear on the side like in the case of a wedge. It is not good when your military unit is isolated from the battle as in the case of a white corner group in the first diagram on this page.

Kjeld Petersen: A professional player once told me that White should take sure territory in the beginning of the game in a high handicap game. White can't be sure to gain enough from influence, and it is "easier" to take away Black's influence than to take away sure Black territory. So White might play as in the first example.

anon: My experience suggests the opposite. Black has so much influence in a high handicap game that White should play to balance that first, by gaining influence. Then White should use that influence to attack. A black player who knows how to use the handicap stones will get too strong a position if White goes only for territory. Gaining terrtiory is the easy part since Black has fourth line stones. It is hard to balance out the power in the center. I typically give up 10 to 30 points right off in exchange for some kind of center-facing thickness when I play as White in a high handicap game. 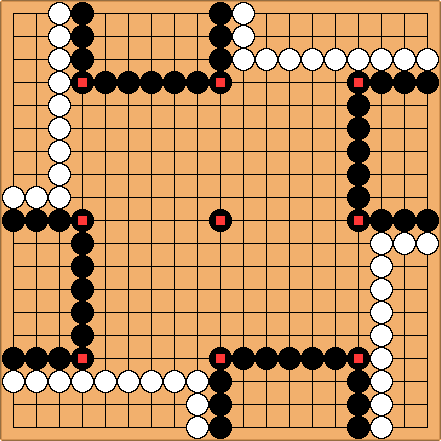 Kjeld Petersen: The same numbers of stones has been played (Black has 9 stones in handicap), but White is only 4 points ahead in territory.

tapir: I find those "square" diagrams for the purpose of proving something odd. Especially if it should prove that black can still win in a 9 stone handicap game desoite throwing away the bigger part of his handicap advantage

Bill: I would take an entirely different tack. 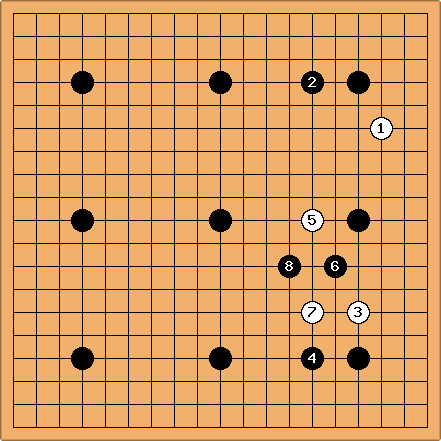 I would explain to the 15 kyu that handicap stones were made for fighting, and that divide and conquer is an important strategem. Now, taking 9 stones Black cannot expect to conquer, but he should at least give White a difficult time. Cutting sector lines is a good way to keep White divided, and the shorter the line, the stronger the cut.

is a good example, since the sector line between

is shorter than the one between

As for territory, I would quote Takagawa: "Go is a game of territory, but territory is almost impossible to make." Better in a handicap game to attack, and let territory solidify in the skirmishes. 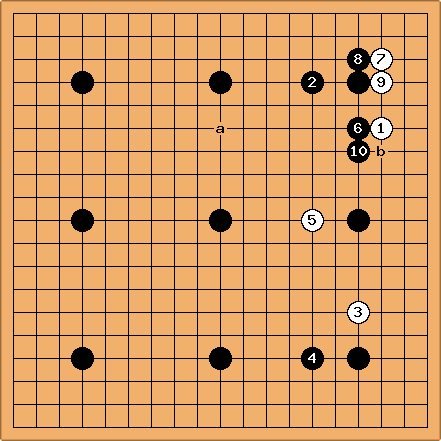 is questionable, it would be better at 10, to break the sector line. Then

is bad, because White can connect easily with

is also bad, as the hane at b threatens to cut the White group in two.