From the 8th Honinbo final, game 4, Kitani (white) vs Takagawa: 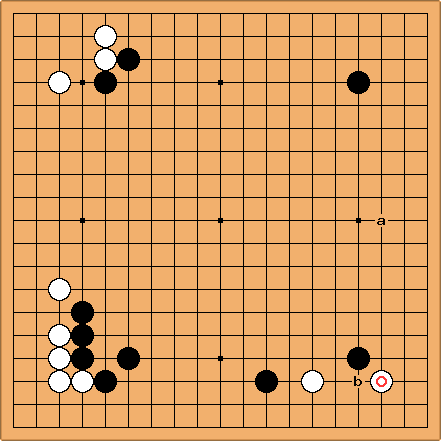 xela: White has just invaded at the 3-3 point. Since the area around a is open, I'd expect black to block at b here. However, what actually happened is: 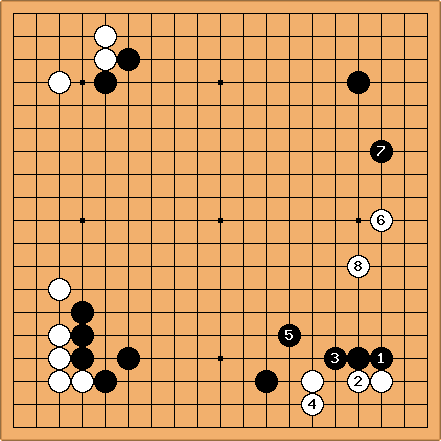 It looks as though

have effectively neutralised black's thickness. This type of play is often criticised as a common kyu mistake. What was Takagawa thinking?

Dieter: I pass on this one.

Andy Pierce: Maybe black just wants to have something to attack. In the black alternative white is strong everywhere which makes a different style game.

hhw: Perhaps Black thought it would be better to attack

to gain influence to make framework on top. Looking at the game continuation, White invaded both the top and bottom later but was killed later in the center. This may not have gone according to Black's plan, but he did win in the end... 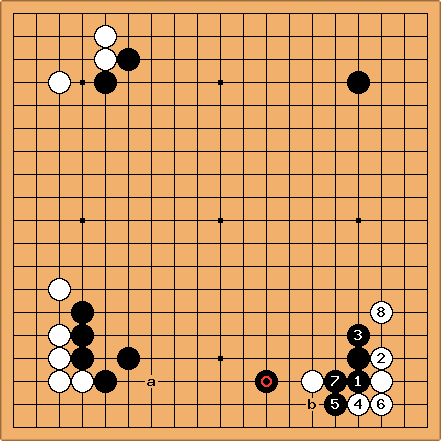 Bill: I have two books that comment on this game. One has a two page commentary in which Takagawa says nothing about this decision. In the other, Atsuku Utsu (Thick Play), the Igo magazine? editors point out that in the black alternative diagram White has plays at a and b, so that Black cannot make the bottom side into definite territory with only one more play. Instead, Black makes overall thickness. Still, they say, allowing White's wedge on the right side is not good.

Dieter: does this mean the marked pincer was a bad move, or just that the bottom not being territory is the correct way to look at an otherwise acceptable position?

Bill: The Igo editors say that the pincer is good, pointing out that to allow White to extend on the bottom side not only reduces the effectiveness of Black's thickness in the bottom left, it turns a later White play at a into an attack. 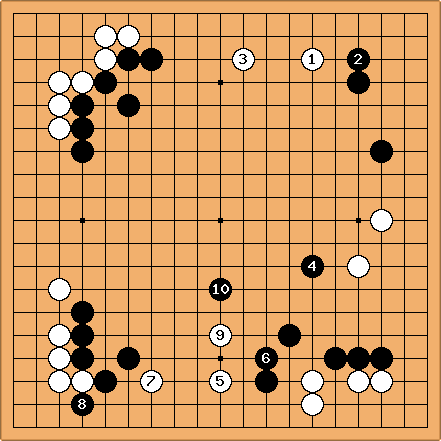 Bill: Later in the game, Takagawa (as reported in Atsuku Utsu) says that

invades the bottom side. 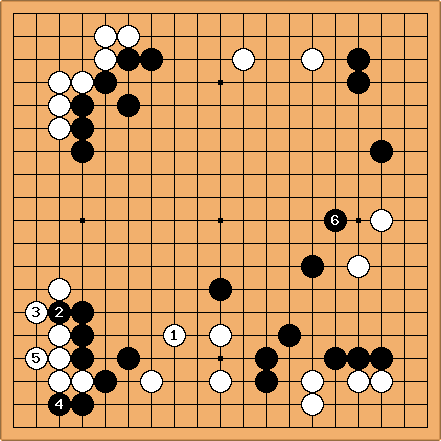 White is in difficulties. (A later position in this game is the first example on Choshi Examples.) 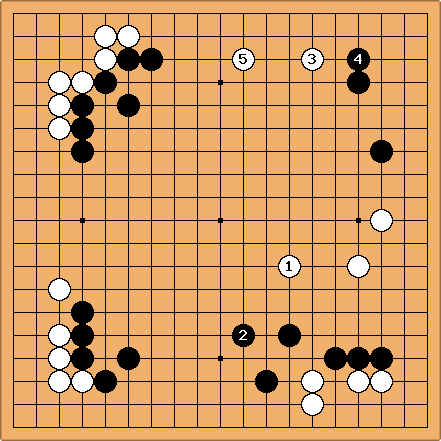 before playing on the top side in the premature diagram. After

protects, now White plays on the top. Black has shored up his bottom side, and a long game should ensue. (Long, close games were to Takagawa's liking.)

Bill: Takagawa's choice of joseki in the bottom right was most unusual. (I would not have found it, either. ;)) But Black's thickness there worked with Black's thickness across the board, and Black got to extend from the top right corner in sente. Later, Black's attack against White's right side stones fully justified his decision.