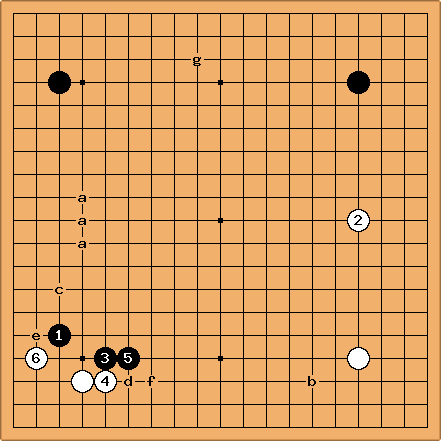 Tapir: I recently played this opening.

looks not good to me. After move 6 where to play? I played at b which looks like a misconception of direction of play, at least how we played it (pincer, 3-3 invasion). Better play around a? Or is the whole assessment wrong since after taking the lower right corner, black has territory there, influence on the left and the first stones in the upper corners. After the exchange in the lower right corner White continued with c.

Andy Pierce: not that I know anything, but if in doubt, making a shimari in the top left can't be bad.

Chris Hayashida: First of all, it's okay for White to tenuki after

. If Black gets the next move, it's the same as if Black played the 5-3 point, and then White approaches the corner. 3-4 joseki and 5-3/5-4 joseki are related that way.

Black needs a reason to play

. It's okay to press down White, but he needs a reason to do it. For example, I wouldn't criticize it if Black already had an extension up the left side. In this case, though, I'm not sure that playing elsewhere after

is a good idea.

I think Black needs to make an extension up the left side. That move would give the black stones a base, as well as serve as an extension from the black wall. I think this is more important than making the shimari in the upper left. Your moves marked a seem about right.

I don't have my joseki books with me, but I know that there are variations where you play at either d or e. These moves start to push White in the corner, while you take one side or the other. Again, you'd need to figure out what direction you want to play before you play either of them.

Dieter: It may be ok to tenuki, but the choice of

is problematic IMO. The two star points on the right aim for influence leftward into the centre. Yet, the two strings moving rightward resulting from the lower left sequence, more or less reduce such influence. Therefore, I think White must use his tenuki to approach one of the two black corners.

Tapir: Black needs a reason to play - this is my problem! I can give reasons for each play, but I feel the reasons change and the reasons for different moves are incoherent. (That's why I announced this page as direction of play question.) For

my thought was: White didn't answer, so let me press him down building influence to the outside which will be useful later (as with shimari and extension). Playing

at b I thought: Oh, a corner, I have to approach before it become a framework... and forgot the other reasons for a while.

Herman Hiddema: I think d would make a fine move for black. The normal continuation for white with

is to make a one point jump to f. With d, you seal white into the corner, you make influence that prevents a real double wing (if white plays the lower edge hoshi, he is getting too close to the black influence) and it has a good followup move at b if white does not prevent that. If white does prevent b (by playing there or one point to the left). You can play e in sente, then build up your framework with g or thereabout.