From a recently finished game on DGS, I play black: 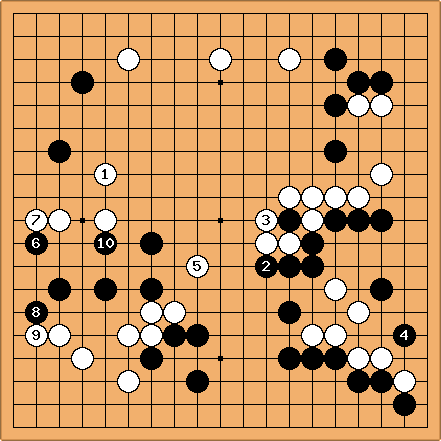 are both mistakes because the white stones are small. I think

is a mistake because white is dead as it stands (though I could be wrong on that). Tapir says the other things I wanted to say. I would say that

is sente and black needs to defend both the center group and the corner group, they're both in danger. 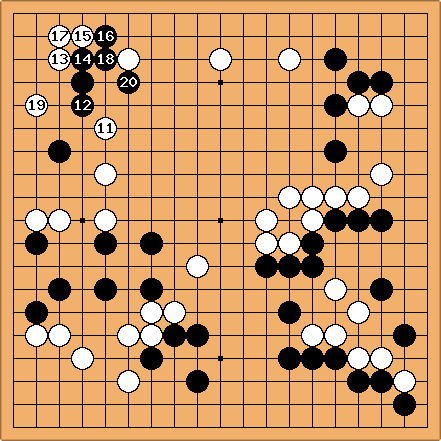 LukeNine45: I think 12 probably is a mistake, but really the mistake was not defending it sooner.

would have been a good time to defend it. 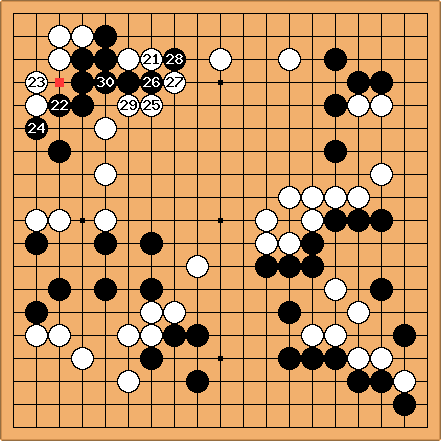 I hope that's not too many diagrams, but I wanted to give the full context. Basically, I think I lose the game because my group in the upper left dies. In particular, was move 12 above my mistake? It seems like I should be able to kill the invading white group, but maybe not. Any help would be great. 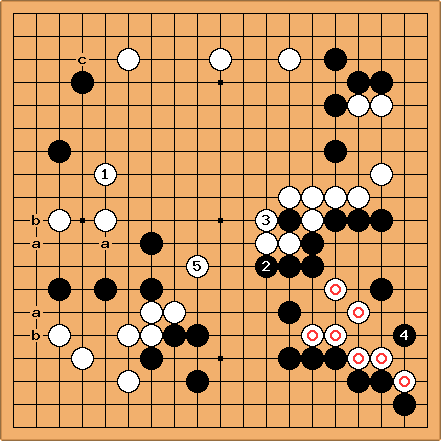 Black has a huge lead in actual territory (the marked white stones are dead).

split and black has now a weak group. But the white one above is weak as well. The exchanges of a against b strengthened white (and granted secure territory in the corner) without gaining anything (it doesn't even make an eye, as far as i read) and prepared the white attack against the corner. What about simply c as 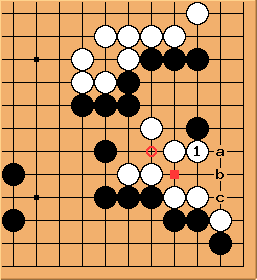 and White playing at that point in plcae of Black...

White has an sure eye at the squared point and can make another eye in gote at the circled point... In my opinion

is an eye in sente, threatening to make another eye on the edge. Black at a and c should not work, I'm not sure about b. (This is an 4kyu analysis)

emeraldemon: Thanks for everyone's replies. Let me see if I understand what's being said: 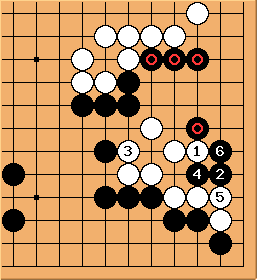 Looking closer, it looks like Black perhaps can kill without that extra move (

in the original diagram), so it was probably not necessary. Similarly

above wasn't needed. The reason I played

above was to make an eye or maybe even two, but from comments above I guess those exchanges might have hurt more than they helped? Tapir's response of playing

) at c makes sense; perhaps I worried about the health of the side group too soon? As for my other question, I meant more generally does

give me enough to kill White's invasion at 13. I guess the answer is no?

Tapir: If u can capture such a big group which should make winning the game easy, but cannot read it out. Don't mind and play the extra move. (This works out at my level as well.) ->

in the original diagram. Nothing is more embarassing than an opponent making life with such a group in the endgame... by just trying.

in your diagram is not enough. White can't win by making an eye in gote, but white can try to play at

. Later he can try to capture the lone black stone, the threat to cut the three marked stones off might be useful. --> Tsumego from Games 84 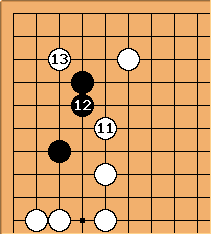 LukeNine45: Not only can black not kill, Black will have to do well to live! You might be able to find a better

but even so, black is so thin you can't expect much here. If White were a little thicker on the outside white could probably just invade with

and quite possibly kill.

kb: Since we've been bantering over whether or not Black is ahead after killing White in the bottom right, let's count actual territory and then try to estimate influence. White has just played 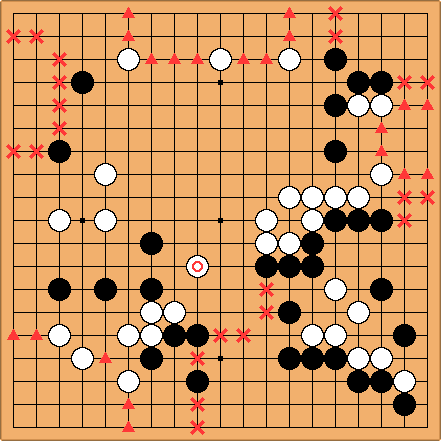 The conclusion: White needs more than 50 points from his influence. Wow! However, it's Black's move next... not looking so good for White.

Black needs to decide what to do with

, since giving them up is big, but making them live is very hard given all of that White influence around. If he can make them live the game is over, but if the can give them up and still win, then Black will have a much easier game, since he essentially leaves chance out of it.

The first thing Black needs to do is strengthen the top left side, or it will get invaded. One simple continuation is the following: 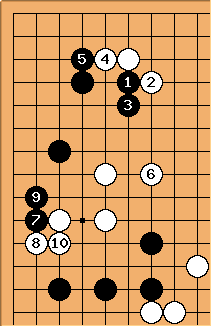 The first thing Black needs to do is strengthen the top left side, or it will get invaded. One simple continuation is the following: 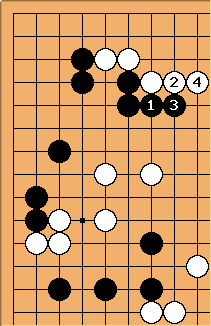 If White resists, some complications may come up, though. 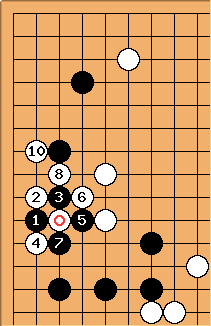 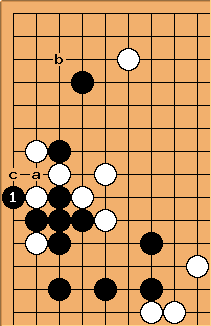 If White connects at a, immediately play 3-3 at b and White has no territory to win. If White goes for the ko, at c, take at a and don't look back (White doesn't have a big enough threat, even living in the bottom right, for you to ignore this ko. Just take at

and be done with it).

White cannot possibly get enough points out of his moyo now: 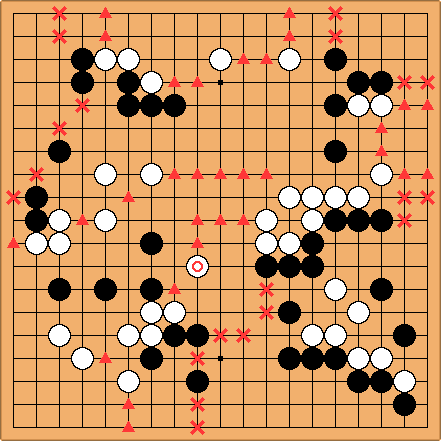