In the latest version of Kogo's Joseki Dictionary (which I don't regard as definitive, of course) the common kosumi response to the one-space low pincer to the 3-4 point is decribed as follows: "

was considered joseki a long time, but is now considered an inferior variation.." 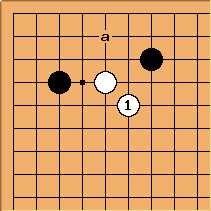 Calvin: Does anyone know the source of that evaluation? I know the popularity of

has decreased in the past couple of years in favor of the other way to separate black at a, but I always assumed it was a fashion thing since a leads to more of a fighting variation. 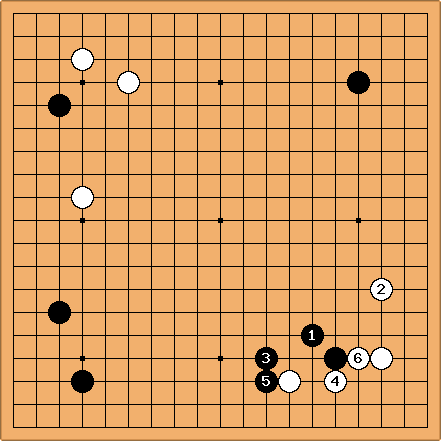 . And the rest is from the book. However, this search also found an unusually large number of amateur games, which does suggest that this move has fallen out of favor with the pros.

kokiri - I think i read some analysis of

by Alexandre Dinerchtein fairly recently. I can't think where, though. I'll mull it over.

LukeNine45: I have heard, from someone who takes lessons from a pro, that

above is for special situations-- i.e. when 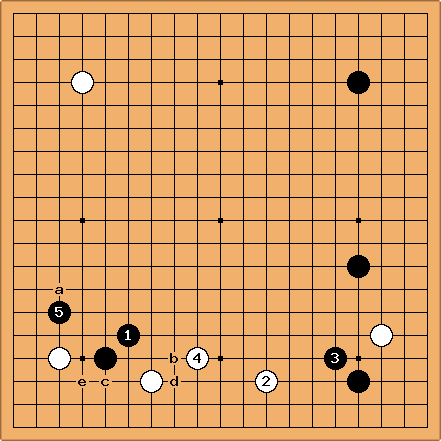 Bill: Here is another fairly recent example between top players. It is still early in the game. What is special about this position? (There are other recent examples from early in the game that look quite different. This is not to say that pro opinion has not generally turned against this move, but there may well be differences of opinion, even at the top level.)

LukeNine45 (I'm in over my head, but here's my guess): I suppose that if play had gone a through e instead of

, that the black stones at b and d would work pretty well with the lower right corner? Perhaps I should restate what I said originally as, "If you can't do anything with (b and d here, 3 and 5 above), you shouldn't play this." 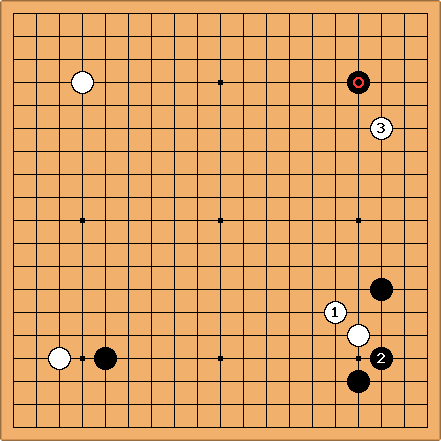 Bill: Here is another recent 9 dan example. This time there is a Black stone,

, in the top right corner.

I do not mean to confound anyone, and I am sure that

works well globally, but I fail to see what is special about these positions. When we say that a play is not joseki, but depends upon circumstances, we can usually say what those circumstances typically are. I do not see a unifying theme here, myself.

LukeNine45: hmm... I suspect I don't know what I'm talking about. 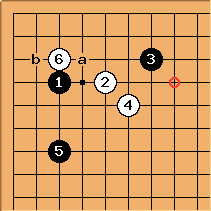 cynewulf: If you look in Kogo's at this sequence, it will say "Once, 'a' was joseki and 'b' disadvantageous. But nowadays, 'b' has a follow-up which proves White 4 to be disadvantageous." I don't really see how that follows, since 6 at the circle is also given as joseki, but apparently this is their "bust". 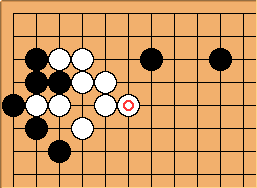 cynewulf: Following b above, you get this, where

Bill: I think I have found the key. This diagram occurred in a game between 9 dans Nakao Jungo (W) and Hane Naoki on Dec. 1, 2003. Since then the inside hane at a in the previous diagram does not show up in a pro game on GoBase. Both the original kosumi (

) still occur, though. In fact, Hane himself, who took advantage of the attachment in the 2003 game, played it himself last year, vs. Iyama Yuta. 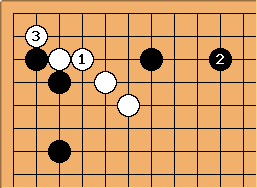 cynewulf: Another way is this, with

extending along the left side. 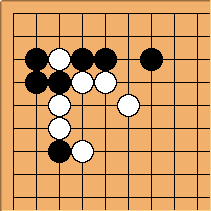 cynewulf: The "old" joseki after a above (which I haven't seen outside old books) is this. Can anyone report a recent sighting?