David: It's because White would respond and play 2 at where 3 is located. Then Black would play 3 at 2.

in the diagram is just a forcing move and doesn't solve the weakness with the shape. 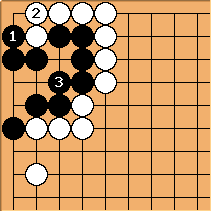 Andrew Grant: As said above,

is irrelevant as Black has to go back and play

anyway. That being so, Black should not play

; it's just a waste of a ko threat. This is why

zinger: Well, "force before defending" is a basic principle of Go. So, usually it is correct to play such forcing moves and then make the move that lives. However, in this case Andrew is correct, because white can never play at

would then be a snapback. See TesujiFromGames2 for an example where the forcing moves are good.

kokiri - i think it's a dangerous thing to do to associate mentally the proverb "force before defending" and this move, which is a sente dame. Just 'cos a move gets an answer, even if it's the answer you expect, doesn't make playing it right, or even good and it's a crutch that I find myself striving to get rid of; playing a move pretty much only because I know how it will be answered. Sente moves and forcing moves are not the same by any means. I don't even think that TesujiFromGames2 is an example of forcing before defending really either.

zinger: Of course you are right, kokiri. I assume you noticed my comment "not in this case". I was only trying to introduce the concept to the questioner, who described himself as 19k. That said, if the situation was a little different so that white could make a point with

would be correct in my opinion. As for TesujiFromGames2, the professional made the forcing moves (both the one I found, and another that I didn't). What would you say this is an example of?

dnerra: I think you guys are a little overprecise here. Of course

is correct, and black lives. (Btw,

kokiri - I am perhaps being over-precise, I agree, but i think that in TesujiFromGames2 they are not examples of forcing moves as I understand them. They are Sente and/or they set up miai to live, but i think that the specific use of 'to force' is a valuable one in go and worth preserving. I am only sticking my oar in to point out, to reiterate, to think that just because something gets an answer means it was a forcing move is not true - something that I continue to wrestle with, and something worth disambiguating as early as possible. If nothing else, playing b above will give white the option of taking sente straight away. That's not worth doing here, but it might be elsewhere, which is why I tried to come up with the second example below... 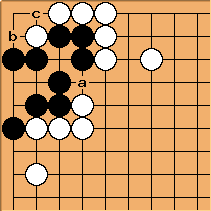 Xanthus: I'd say black a is better, because that leaves both less ko threats, and lives with a big follow up. If black b, then white could play a and would have a perfect wall, with black in gote. Also, it seems to me that in the first diagram

leaves a much bigger threat for white, although it also threatens to make a few points itself of course.

kokiri - this is not exactly what I wanted to show, but yes - a must be better because it will be sente, whereas to play b would be a mistake.

zinger: Agree - clearly a is better in this diagram. How about the next one? 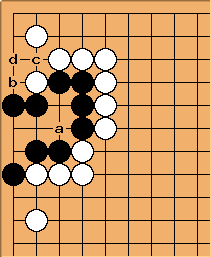 zinger: This is the same as the original diagram, just moved down two lines from the corner, and a white stone added above. In this position, I believe that b is absolutely better than a.

Alex: I disagree. There is no White follow-up to b and Black's follow-up is much larger than the move itself, so Black is more or less guaranteed to get it, provided his endgame is up to snuff. Playing it before playing at a wastes a ko threat for Black and, as Bill points out, creates a large ko threat for White if she defers answering until the endgame. The difference between this and TesujiFromGames2 is that, in the latter, the move in question is double sente.

zinger: I see your point Alex. White is unlikely to get b. What I was thinking was that if black plays a, then later b, white might ignore it. Then after black captures one stone, the move at a has become completely useless (worse than passing under territory scoring!), but has been exchanged for a white move elsewhere. Playing b first avoids this.

The ko threat is an interesting point. I have been under the impression that it is usually bad to forsake real points for ko threat considerations, but maybe I am wrong about that.

Alex: I think he does have the letters mixed up, but even so, there's something I'm not getting here. Bill, if playing Bd in gote is worse than playing Bb in sente, why is d the normal yose? If Black lives without playing either move, b should still be his perogative if he chooses it, no? Having the choice between b and d (rather than choosing b earlier) can't be a bad thing, so the only way I can see that playing b before living is advantageous is if there's a realistic chance that b won't be sente later. The move at b appears to be two points to me, while capturing at c looks like three or something (I've never really understood how the various methods of counting work), so shouldn't there be a point in most normal endgames when Black will be able to play b in sente? Or is it because White can play at d and make ko if Black plays it later? I'm really confused. (I know this is way too advanced and secondary to the original point of the question, so I support the fact that it's on a separate Discussion page, but I think it's worth figuring this out for our own education)

Bill: (Referring to the next diagram:) If Black lives by playing

first, then when he later plays

would be a mistake. But if Black lives by playing

, then later, when he plays

is correct. If we calculate the sente-gote difference, it comes to 5/6 of a point.

in sente, Black doesn't (as a rule). It is gote for life, and it is gote later. To see that quickly, if it is sente, it is worth 3 points. (The reverse sente at

would make territory at

in sente with White replying at

. Black's gain is less than 2 points, since White could still play at

. Since Black's threat is worth less than

cannot be sente. You can also see that a jump to

is worth less than 2 points. 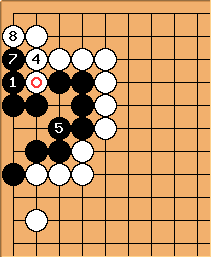 Bill: To be clear:

is sente. Even later,

is sente. If Black lives with

is gote, not sente. The difference comes to almost 1 point.

dnerra: I am at a loss here. This is a 15k-25k life and death problem. And everybody starts a discussion about which sequences leaves ko threats, are better endgame, etc. Can't we adjust our answer just a tiny little bit to the level of the original question??

Dave: I am more on dnerra's side here. In the original question someone gave the wrong answer. This whole page is a "if things had been different, I would have been right" discussion. How often are we all guilty of this kind of wishful thinking? :-) In reality however, the only way to improve is rather, "Yes, I was wrong. I'll remember that next time!"

zinger: Actually, dnerra's comment *was* on the main page with the original question. I just moved the whole discussion here when I created the page. I didn't want to edit out anyone's contribution.

Alex: I didn't get the feeling from zinger's alternate position that he was trying to "prove" himself right in a slightly different situation, so much as trying to pin down a subtle distinction. I think it's interesting and important enough (5/6 of a point is significant!) that I'd like to see a series of problems like this, exploring the issue of when "kikashi before living" is really kikashi, and when it's just a waste of a ko threat or even aji keshi. I will agree that it is only tangentially related to BQM257, so maybe it should be a separate page of its own, rather than a discussion page.

zinger: Thanks Alex. Certainly, I did not say that the atari on the first line was correct in the original question diagram; rather, I agreed it was wrong. So there was nothing for me to try to prove. Really, I was only trying to introduce the questioner to the concept of force before defending, which seemed to me related to the question. The resulting tangle was not what I expected, but I still found it interesting and useful. Thanks to everyone for their contributions!

Dave: I believe that although some of the subsequent discussion may be of interest to readers it is nevertheless incorrectly placed here. It is indeed not about BQM257. Too much of what is presented in SL is tangential to the starting point (whether that starting point is a BQM, a proverb, a Japanese go term, or whatever). The result is that too much good material is sitting in difficult to find corners, inadequately linked, and never contributing to a well-ordered presentation of the game we all love. This is the fault of the authors. An excellent case in point is this post. If I do not add these same points to meta discussion, I will be (once again) guilty of exactly what I am complaining about here :-)