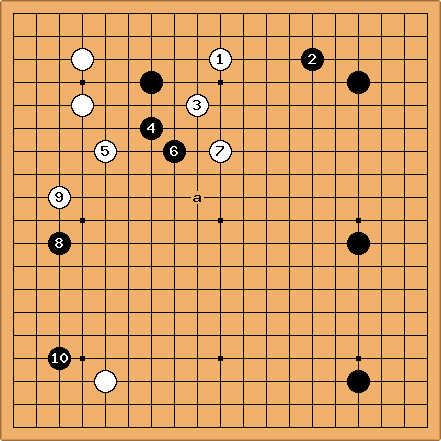 I played white in this game. Black responded to the attacking moves of

with the big points of

, then made a four space extension to approach the lower left corner. Even though it seems White should be able to set Black with some problems in the middlegame, it is at least a psychological difficulty that Black has managed to take

in addition to the High Chinese Fuseki formation. Has White played adequately so far, and what continutaions/plans can White use to take advantage of Black's weaknesses and reduce his potential? Thanks. -JM

it seems only fair to use it for attack, starting with a and progressing to a splitting attack against

. White builds up enough strength in the center (similar to the GreatWall formation) that nullifying black's chinese formation on the right shouldn't be much of a problem. I would have prefered

to be on the top star point rather than on the third line, in order to more directly contest black's influence while attacking.

Velobici: The White 3-5 point stone in the lower left places emphasis on the lower side. The 3-4 point Black stone in the lower right may make the lower side a difficult area for White to develop. Alternatively, one can look at the 3-5 point as an influence move, inviting Black to take corner territory. White influence facing the center in this game would be hampered by Black's high chinese formation. Given Black's commitment to influence (all moves on the fourth line relative to the right edge) and the flexibility of the White top right one space enclosure (can develop either across the top or down the left side), could it be that

is misplaced, that White should use that move to make the 3-5 point stone useful?

Bob McGuigan: One point I'd like to make is that I think

is misplayed. Certainly Black has played too close to White's upper left shimari but

doesn't put much pressure on the black stone. For one thing it aims to take away Black's base, but that was already undercut. If I were going to pincer here I'd prefer to do it one space higher, on the star point. In the game White was attacking from behind so it was easy for Black to play

Bill: I agree with Andy and Bob that

is too low. It should be one point higher. (In fact, I think that

are all misplaced.) Because of

has the feel of pushing from behind. After

, White would like to play on both sides. Having played