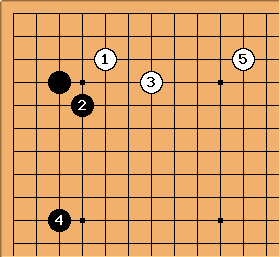 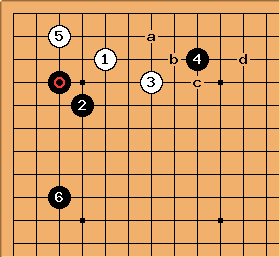 White can not tenuki as Black a is intolerable and White b, Black c is unfavroable. White lacks a good follow up move; therefore, White's slide to

is not not joseki.

in the diagram labeled Not joseki, Black extends four spaces to the point directly below the star point. With the slide, Black holds back one line.

Why? How does the

stone affect Black's ability to extend in such a manner that

in the diagram labeled Not joseki is correct rather than one line closer or further from the kosumi?

Bill: The premise of the the question is flawed. Who says that the slide to

Velobici: Both Kogo's (27 March 2005 edition) and Ishida Yoshio's Dictionary of Basic Joseki (admittedly old). GoBase has 35 games with the Black pincer of

, only two of the first 15 show the slide. A counter pincer at d seems more popular, followed by a Black one space jump.

Chris Hayashida: Where? d is missing from the diagram. Added.

Bill: I think he means a one space pincer. Yes.

BTW, I also did a Gobase search, apparently with a larger window, and found only ten matches after eliminating duplicates. The big winner was tenuki (five times), with Black resuming. Next was the one space counter pincer (twice). The slide, one space jump, and one space high pincer on the left side each occurred once. Score for the "standard joseki": Zero.

, why does Black not extend as far as the 10-3 point? Because he needs to make a base. Without

he can make a base in the corner if White invades on the left side.

guarantee a base? One line closer would match the extend on farther than you are tall hueristic. One might think the kosumi is weaker than descending from

toward the edge, but this could be my kyu level ineptitude speaking.

Chris Hayashida: I was thinking that

make a base without

Chris Hayashida: I haven't read out the entire sequence if White invades, but I thought I could shed some light on a theoretical level. Generally, invasions are more dangerous if there are supporting stones around the group that is split. In the first diagram, Black still has "room" at the top and bottom, so if there is a splitting invasion, Black should be able to manage both groups.

In the second diagram, Black doesn't have as much room at the top, because of the

slide. The invading stone might be able to connect underneath to

or live. Therefore, the splitting invasion is harder for Black to manage. To prevent it, Black makes a smaller extension.