It was played on DGS, during a month or so.

I held black. After fifty moves, white has pretty sure points (except for LR), and is ahead of black. What can black do to catch up? 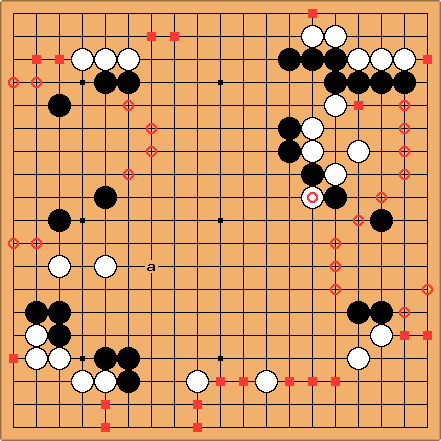 To me, it seems as white has 60 points, while black's territory only amount to 40.

This is not the case 100 moves later. By then, black won by resignation.

For some information about black, see Tjalveboy.

LukeNine45: Actually I think Black is ahead already. White's two weak groups look much weaker than Black's two weak-ish groups (Actually I think both of those can be connected out, so maybe they're not weak at all). Black should be able to find useful ways of chasing them across the board. Also, Black ought to be able to play first in the upper left with sente (if White lets Black play on both sides I think the three white stones should die), so you've over estimated white's territory there. But I am only around 10k so it's entirely possible that I'm completely wrong...

Tjalveboy: As you are stronger, your opinions are more important than mine =) But I think you are correct here, black is strong.

How should black continue from now on? Any suggestions?

zinger: I also think that Black is definitely winning this game. As to what to do next: first, black must connect against the atari. A white ponnuki there would be too good to allow. Following that, white will probably have to live in gote (if at all) with the upper right group. Meanwhile black will build thickness, and then cap at a for a strong attack and big moyo.

Also, the marked area along the bottom is not white territory yet. With overall thickness, black can easily invade it. 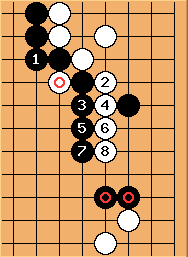 P7A77: I agree that allowing the ponnuki is disaster, but Black should be prepared to give up a fair portion of the right side in exchange for influence, then go for the cap at a in the previous diagram. 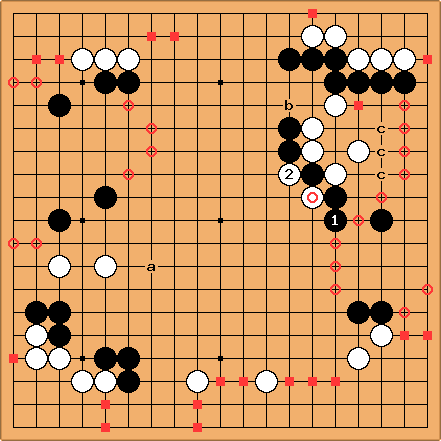 LukeNine45: Provided the white can't make eyes, I think that black should still be happy here, as he can chase the group either left (for stones facing the week bottom area), or down (for center influence and to let him solidify some territory on the right while still putting preasure on the white stones). Whether or not the white stones are strong now or not I'm not really sure; Black probably has to take gote by playing b or around c, but then white gets to run whichever way she wants, which is probably bad. I think I like this a little better than P7A77's diagram (Which I've repeated below to see in context with the rest of the board), but I'm not very sure about that...

zinger: I think that it is very wrong to allow white to break out like this.

kokiri - agreed - the first purpose of attacking white is to make thickness/territory, to kill is only second, keeping black confined to the side is vital 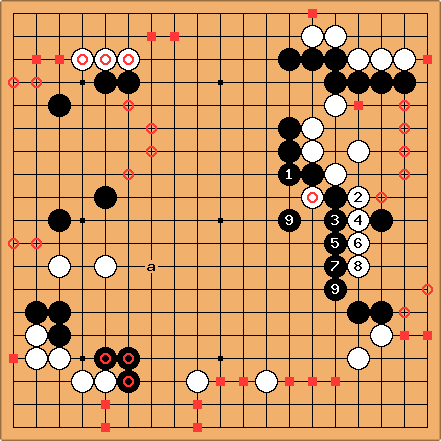 LukeNine45: I'm not sure what to think about this. I think

at one of the two marked points is necessary, so white will have sente to play a. White may have a tough fight if she doesn't want to weaken the bottom further, but the

stones maybe could get cut off, and it looks like black is putting all his eggs in one basket-- if white lives anywhere inside then I think she will be ahead, or at any rate, back in the game. The center is never as big as it looks... (I reserve the right to change my mind when a stronger player comments....)

kokiri - this is pretty painful for white, the group is still not obviously alive alive to my eye, the invasion of the bottom white formation is strengthened, and the centre may not be as big as it looks, but it looks massive, so i don't think that's a problem 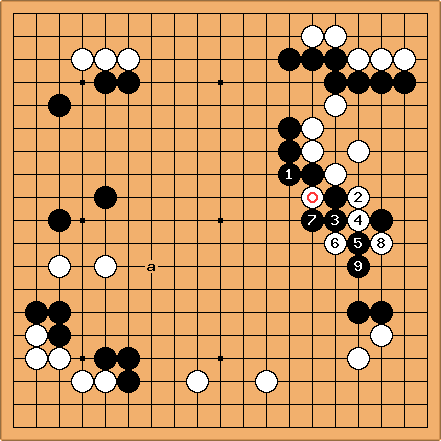 don't seem to get anywhere - white still needs to live.

Andy: White needs to make life with his weak group in the upper right and prevent black from converting the whole center into territory. For this to happen, white's stones on the left are going to need somewhere to run so what white must not do is to help black build a strong wall on the right. Conversely, black cannot allow white into the center from the right (with a ponnuki) since this solves both of white's problems for him at the same time. Accordingly, I see something like: 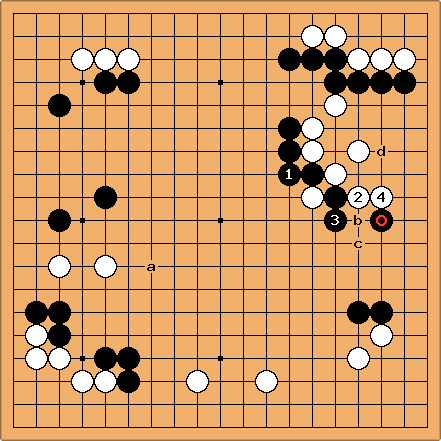 Where white makes immediate life on the right side and leaves some aji on that side to help get his stones on the left side out.

zinger: In this case,

at b would still be sente - if

at d kills white. So probably white should play

. Now white is alive, as she can capture the marked black stone. Black must not answer this threat, but rather switch to

at a, for good game. 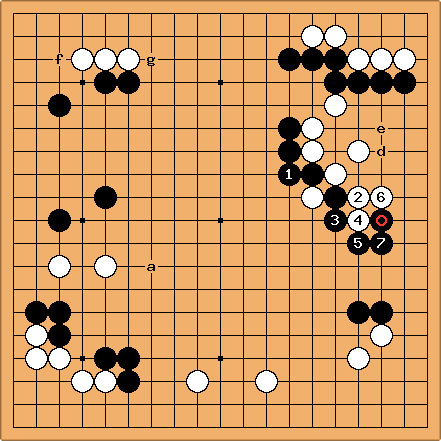 zinger: In fact, the more I think about it, it seems possible that protecting with this

will be sente against white's group - black still threatens d.

kokiri - without reading too much, i like the look of e rather than d, but either way i agree that white needs to add a move. A move in the top left is in order; I'm not clear of the correct direction - f or g. 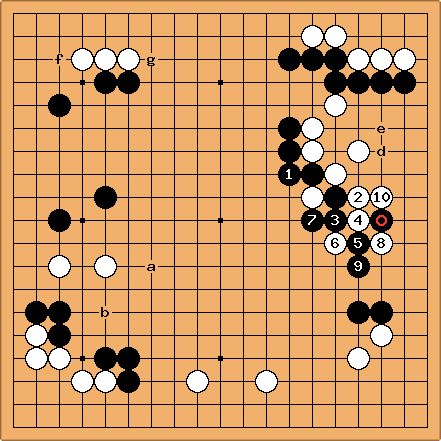 This sequence is unavoidable I think. Next, Black can increase his thickness to a global level by playing b, letting White find out for herself how to get out of this position. Dieter