DJ: Dear fellow Deshi's, these days I am once more reading (studying?) The 1971 Honinbo Tournament.

The depth of the analysis (which makes it comprehensible even to a hopeless player like me), the quality of the players involved and, why not, the suspence James Davies has managed to put in the tale makes it one of the greatest ever go books in English (my VVHO).

I've been enjoying the

At the end, Black is leading due to a mistake by Ishida in the early yose (at move 132). 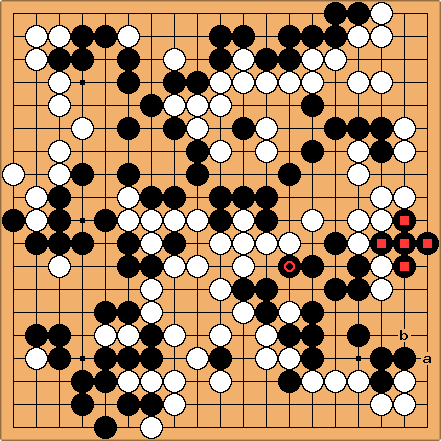 ) the biggest yose is of course in the LR corner, where White can choose between what looks to me like a two-point sente at a or a five-point[1] gote at b (Black cannot intercept, else he would face a ko against the five

that would cost him the game).

that even if he played there he would lose the game, perhaps by 3.5 points,

leaving the reader to verify such a statement.

I have tried both plays, a and b, but couldn't manage to contain White's loss to less than 8 points[2]. Weeeellll, Ishida is sure much more than five points stronger than me . . . ;-)

What happened in the real game? 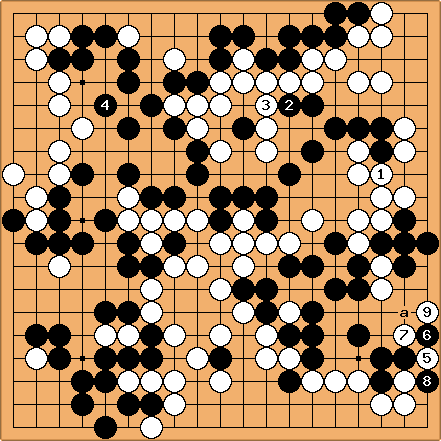 Seeing that he could not win, Ishida played 186 at

: he expected Rin to play at

to clinch the game, intending to resign after such a play.

(I personally would think that he knew this didn't work).

If now Rin connected at

, a terrible ko would happen, so he calmly played at a, unconditionally capturing

Just for history's sake, Ishida won the title 4-2 and became the youngest Honinbo ever, at 22. I'm not sure, but I think this record still holds, Cho U being just a few weeks older when he won the Honinbo from Kato last year. Incidentally, Cho U is a pupil of Rin . . .

DJ: Dear Robert, thanks a lot for all your editing! I will try to answer your questions...

Wow, that's correct! Did you painstakingly count all the stones to guess how many were exchanged in the ko that gave birth to the lumpy five's (the

Robert Pauli: Neither. GoBase shows the captive count at any point, that's all.

Question n. 2
Before or after komi?

Well, it was counting the komi in. But today I've found a sequence, starting with White's sente play, that brought her to a loss of 5.5 points only... pity that I have already forgotten it...

And now the most difficult, Question n. 1
Not a six-point gote?

After Black goes first in the corner White plays

and Black has to answer at

: then when White will play his privilege at a and b Black has to capture at c and d; result: if you assume W y and B z the black territory is 13 points.

After White a and b Black will have to play only c: the black territory is now 9 points and White has gained 1 point at w, for a net result of 5 points.

Again, Black will have to play only c: the black territory is now 12 points and White has gained 1 point at w, for a net result of 2 points.

Robert Pauli: Many thanks, I see. In both cases, when White goes first, White gives Black one teire for free, reducing "normal" figures by one. (BTW, there's not need for %%% before an empty line.)