I'm white. I invaded at san-san because the area around it was becoming too big for black and I didn't see a better spot to invade.

The sequence starts with the marked white stone. I think that up to

was probably a mistake.

Can white live, starting from, say,

HolIgor: I don't see how it can live after

. I don't see how white can live without support.

is played so close. My try would be to play at

; is there an obvious refutation? I have the same question about one of the plays from 44-63 Enclosure, see [1].

Imagist: According to 38 Basic Joseki, the correct way to invade this enclosure is

This, for example, seems to live if black has to play

. If black plays an atari after

, then fight ko, there is a chance to break through. Actually, such corner invasions depend very much on the surrounding stones, where the support is, which moves are forcing, what kind of semeai is available. One has to practice tsume go and read it out each time it is on the board.

Icepick: I think that white can get a ko:

[1] JoelR: I lifted this diagram from 44-63 enclosure. Charles says White's follow-ups are at a and b, again, what is worse about c? 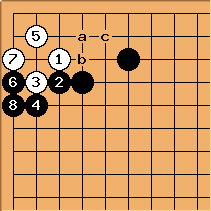 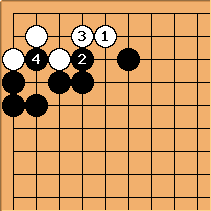