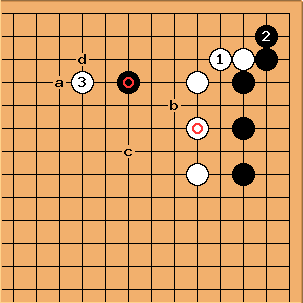 Dieter: In answer to

, can we say that

is too low and slow ? I've been playing this move, which looks like honte, taking away White's base while making territory, but two times in a row now the attack of

or a has made me lose control of the game. --Dieter

Actually, a pattern search on gobase shows me 24 games with the minimal quadrant containing all stones before

. In only 2 cases, Black tenukies, in one case he runs out at c and in all other cases he plays

, whether or not preceded by a forcing sequence at b.

The thing is, when White next pincers at

stone isn't light at all. It looks like Black will always run out and when he plays this variation (in fact already when playing the two space high pincer) he's already prepared to run out with this stone.

My mistake is probably that I have been treating this stone lightly, where it is actually heavy. Opinions ?

Stefan: My personal database search confirms this: 9 continuations at

versus 6 others. White then almost always attacks at

or d, followed by Black jumping out. The conclusion seems to be that you shouldn't play the two space high pincer if a jump from this stone (running battle?) is disadvantageous.

only in positions where there will be a chance to attack

rather presumes that a running fight on the upper side can be good for White. Otherwise White probably should try a lighter method (two-point jump out), or to settle with the ogeima.

Then, in the contemporary joseki,

is very often omitted. Until

is played, White has a sabaki option at

So, I don't find it so surprising that in pro games, if

is played, White has a good attack on

. In a sense White has already paid for that attack.

dnerra: The two one-space jumps before also were an investment into the battle, as they forced black to take very secure territory.

In amateur games, it is probably true that Black's pincer is often played just to be 'aggressive', in cases where White's one-point jump is good. On the other hand,

is always a reasonable play: it is big, and takes away White's base. On Gogod, I only found two examples of

dnerra: I think it is also important for Black to realize that he cannot get a too good result from this fight, as White has invested more into it than Black. Maybe you should show us the whole board and/or your continuation, Dieter? Maybe you have been asking for too much later on. 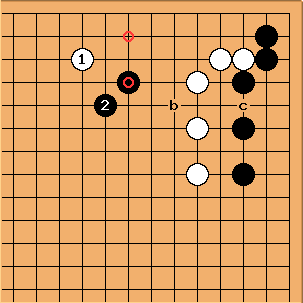 It was a small sample (surprisingly); but

was a more popular attack, aiming also at the slide to the circled point.

is good shape (Black at b, White at c are pro moves, too). 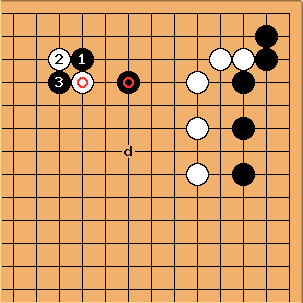 I suspect that with

played, Black may later be able to play

to try for sabaki here.

on the fourth line leaves some kind of weaknesses. In one game Black jumped right out to d, next.

Going back to the starting position, the widest path I found to be this: 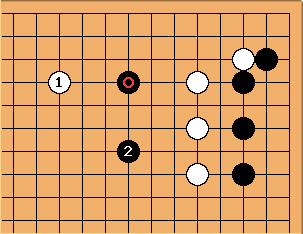 And then no clear continuation.

It looks to me like this is one of those positions where the pros are working with a different set of ideas. I mean,

here are both much more flexible than the suggestions above.