phenomene : Well, I think a sequence linked from the page Joseki without further explanation should refer to something locally leading to an even result. Of course there are special circumstances where this sequence is good (when one has strength on the side as in your examples), but it is usually bad to play Kosumi-Tsuke when the opponent has room to extend. It may be called Joseki because it matches the translation of the Japanese "settled stones", but in usual go language, one uses the word Joseki for equal results only, and it is common to say "this is not joseki" for sequences better for one player. In short, it is dangerous to suggest a sequence is a rule when it is an exception.

Bill: I think it is what joseki books call a play that depend on the circumstances Baai no Te. 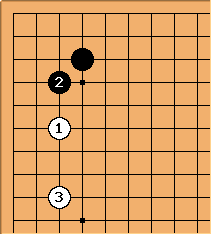 Andre Engels: I don't agree with phenomene. There are joseki in the joseki books for which they say, "Locally this is good for Black/White, but it may be different regarding on the overall position." Ishida for example, regards the sequence to the left a 'basic joseki', but also notes that "just taking this area in account, the exchange [...] is clearly favourable for Black."

DaveSigaty: Yes, he did say that, so I updated 3-4 point distant low approach to warn readers against taking such out of date advice too seriously!

More seriously though, I agree with Andre. The joseki books would be both dull and a lot thinner if they only listed lines where there was a clear consensus that the result was completely even. More importantly, perhaps, they would be forced to exclude all the joseki that are currently being used = the ones where there is no consensus yet so one player or another thinks they will lead to an advantage.

BobMcGuigan: The famous statement that "for a meijin there are no joseki" suggests that very strong players make things up as they go along, or maybe that "joseki" are determined by social convention among go players. There are also various sequences that were given the "joseki" stamp of approval in, say, Ishida's dictionary and widely played in professional games but some years later are no longer considered "joseki". Maybe all joseki dictionaries should have a warning label that indicates that the moves in this book give results that are generally considered equal at the time of writing but are not guaranteed to be so in the future. Nakayama Noriyuki, writing on this topic, said that erroneous joseki sequences seem to persist in dictionaries for 30 to 50 years. In other words, it takes a long time for go writers (and even pros) to become aware of some of these changes of judgment.

Charles At least. If one works closely with them, one becomes aware of the uneven nature of their content. For example, repeating old analysis not based on high-level play has been common up until recent times (when, to be fair, there are many thousand more games played per year by pros). You can find minor mistakes in suji, too; which is probably a sign that an insei compiled a section, rather than a strong pro. The Igo Daijiten must quite largely consist of research rather than joseki from real games. One reason that Korean go has had such an impact is that a more sceptical attitude has been applied to 'things everyone knows'.

Warp: AFAIK it's wrong to think that a joseki is a pattern which (always) gives equal result to both players, and this is a common misconception. A joseki is an established pattern which gives the best possible outcome for both players given a certain initial position of stones. A joseki doesn't have to always give equal result to both as long as it gives the best possible result to both starting from a certain arrangement of stones. It may perfectly be that eg. in a corner situation one of the players is already much stronger than the other (because he has for example more stones there) and there's absolutely no way for the other player to get an equal result anymore, no matter what he does (assuming his opponent plays well). However, he may still have a good sequence which gives him the best possible outcome in that specific situation. In other words, he minimizes his loss. For example, if there's a stone at 4-4 and the opponent plays at 3-3, that 3-3 play is not a joseki, it's simply an invasion. If this happens too early in the game it's usually a bad invasion because the invader is in an inferior position. Thus invading at 3-3 too early in the game is usually a mistake. However, that is irrelevant with respect to the defition of joseki. Now, the classical sequence which usually follows from this arrangement of stones is a joseki because it gives the best possible outcome from this position forward for both players. It was a mistake to play the 3-3 stone in the first place, yes, but the following moves are not mistakes anymore, they simply minimize the damage. Thus those following moves are joseki. Curiously, even some pros misunderstand this. (By the way, I think that the definition of joseki in the joseki page could include this notion.)

Bob McGuigan: Some sequences considered to be joseki give a clearly unequal local result because, say, Black has played one more stone than White. The expectation is that the player having made fewer moves got compensation elsewhere or didn't lose more than one move is worth.

Arieh: The distinction between old and new Joseki is irrelevant to all but professional and near-professional strength players. If a joseki was considered the best option for decades by top pros in the past, the fact that today's top pros have found moves that give a slightly better position has no relevance for most of us. If an old Joseki leaves black better by a quarter of a point, it doesn't mean much for us as white when we are making mistakes that cost us 2+ points.

Lynx: Sure, but the goat in me says that while fixing that 2 point mistake would be great, if you win by just half-a-point, getting that quarter of a point was worth it. Knowledge is its own reward, to a degree, and playing Go for any non-competative reason is calculated firstly to maximize pleasure and only secondly for winning.

Arieh: I agree entirely. Memorizing Joseki seems like the epitome of knowledge for the sake of winning. Studying Joseki can be the opposite - appreciation of shape and general principles of territory vs influence. However, the distinction between old and new Joseki is by definition subtle enough that, except for very advanced players, it has to be memorization; if even advanced players could really understand why the new Joseki is better than the old, than it wouldn't have taken the best pros decades to find. We may remember the explanation that a new Joseki is better for black because it yields more center influence, but to really understand the distinction we'd have to be at a level approaching that of at least the pros who missed the better move for decades. Harping on an exceptionally subtle distinction between Josekis is like an amateur skiier spending lots of time waxing his skiis. Yes, the wax will make you ski faster, but it has much less impact than other, more useful, and more fun training.

Bill: I do not believe that a 1/4 point difference is enough in itself to scuttle a joseki. Surrounding conditions will be right for it to be chosen often enough to remain joseki. I think the difference has to be at least 1 point for the size of the play to be decisive. (Style also matters, as does the type of fuseki.)

If you simply memorize the new joseki, you gain 1 point every time it comes up. But if you understand why the move gains 1 point, you can use that understanding to play better in general, and that understanding can be worth one or more stones in strength.

Besides, the differences between old and new joseki are not always all that subtle. I can think of at least one old joseki that you never see anymore. Why? The answer is really quite simple. The player who is pincered makes a contact play to secure his group. It was later realized that that was unnecessary, and it strengthened the opponent's stones as well. So people stopped playing it. The principle is not hard to understand, and, in fact, it applies to a number of old joseki. To be sure, recognizing when you do not need a contact play to make your group safe is another question, but the principle is worth learning, and it is not particularly subtle.

RobertJasiek: Joseki Volume 3 Dictionary contains a chapter about joseki evaluation, with which judgement distinguishes even from one-sided josekis. The evaluation depends mainly on numbers of played black and white stones, territory, influence and significant strategic concepts. Accordingly, value types are introduced; the value type for a one-sided result is called "favourable for a player".

Are Joseki even last edited by RobertJasiek on May 16, 2012 - 20:50
RecentChanges · StartingPoints · About
Edit page ·Search · Related · Page info · Latest diff