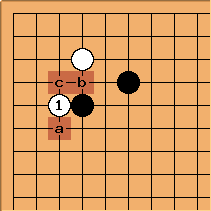 is White's first choice to make life in the corner.

That is easily done if Black now plays a or b. Black may have the intention of playing the hanedashi variation, c. This is a complex but very old joseki. 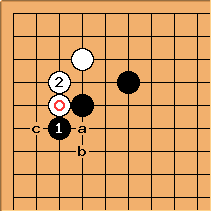 is compulsory: and now each of Black a, b and c is playable (tenuki has been tried, but too rarely to be considered joseki). 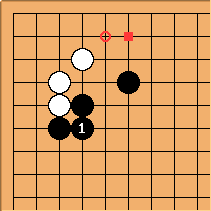 , White is already alive in the corner, and so may play tenuki immediately. If so, Black has a good kikashi at the circle-marked point, and a slower play at the square-marked point. 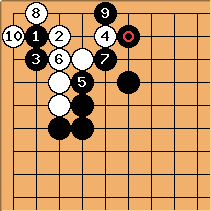 The idea of playing at 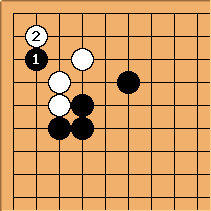 There is also the idea of a direct placement:

in the corner has been played in a pro game. This idea may go back to Kajiwara. 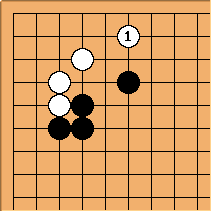 It is therefore simpler for White to play

, though this ends in gote. 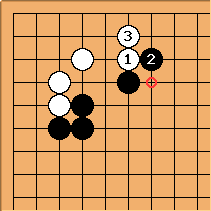 The idea of playing instead

goes back a long way; and is still seen in pro games. If Black connects at once at the marled point White will end in sente - but has given away futher thickness here. Probably Black waits a little. 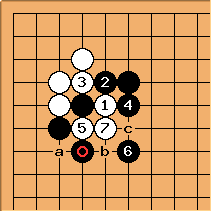 If black plays the hanging connection

, the same variations for black and white still exist, but

gives white another option. Rather than saving an unimportant stone, black seeks to keep white encircled with

, the variation fans out with

having been played at each of a, b and c. 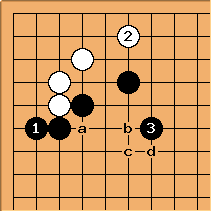 is aimed more at the left side than the top. After

, the white cut at a becomes an important issue.

is the most usual move, but b, c and d have all been played - as has been a black tenuki, letting white do her worst. 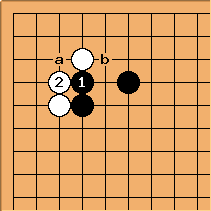 here is a little crude as a way to make shape.

is forced; then Black at a leads to a well-known simplifying line - which has been out of fashion at times during recent decades. Black at b is also worth considering. 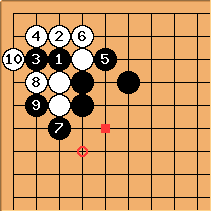 This sequence has at times been popular amongst pros (finished by Black 11 at the circled point: White has a peep at the squared point that may be played immediately as kikashi). Shortly after its appearance in the Kisei match in 1979 (game 2 on 1979-01-24) played by Ishida Yoshio against Fujisawa Hideyuki, it became unfashionable for two decades.

In fact its status as joseki has often been questioned. By pro standards, Black's play here is rather simple-minded.

On the other hand, this way to play still occurs in pro games. 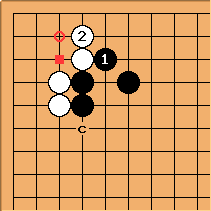 is also possible here, for strong shape on the upper side. Then

is usual: White can play at the circled point, too.

At this point Black can continue at c, as if this were a pushing battle, or cut at the square-marked point, which is a probe. 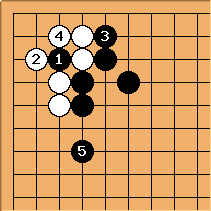 , Black should be happy with shutting off the open skirt on the top side. 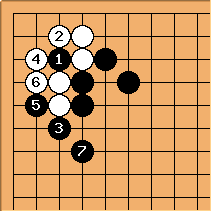 is the Cho hun-hyeon style. Assuming

, this is a slight improvement on the classic result, just in endgame terms (weakness of the 2-2 point). 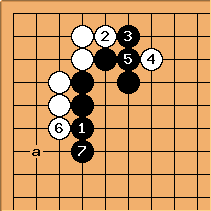 If black does not play the probe, this is a common joseki. Possible variations include 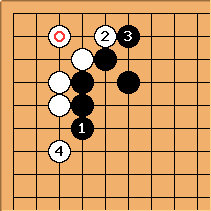 In this diagram and the next two of various possibilities after 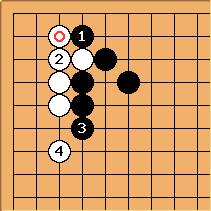