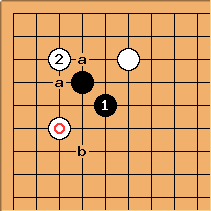 Charles Matthews This diagonal play has experienced a revival in pro games, associated with new thinking about central influence and possible tenuki variations.

at the 3-3 point is normal; and now Black plays a, b, or tenuki allowing White at a.

The problem with this joseki for a weaker player is that Black at a can leave a black wall, but without a pincer attacking

and also with some potential shape problems. Clearly this isn't troubling at pro level, but amateurs can come to grief here. 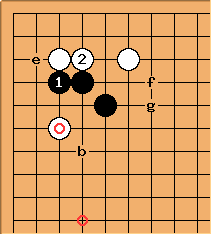 Black's main options are at e, f and g. Playing g, which is a move useful in handicap games when Black has a stone already at the circled point to attack

, isn't very forceful here. Black at e is only seen in old games. 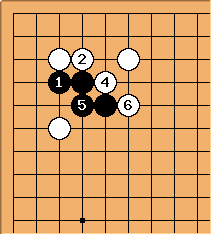 , black cannot tenuki. White's shape is too good after

. If black wants to tenuki, it should be before 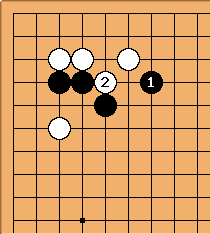 is the best idea here, but the bulge play 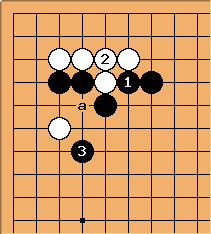 In games of Hane Yasumasa based on the Chinese opening

was used to build influence for Black on a large scale, treating the cutting point at a as secondary. 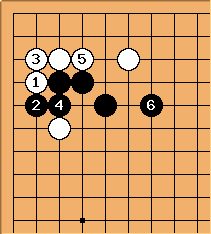 would be a big mistake as it doesn't take advantage of Black's shape problems. 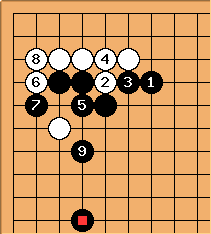 is present, this is played in many pro games.

firstian As a beginner, I'm always looking for the "meaning" of a move, so I can think about whether a move makes sense or not, and also how to respond when my opponent doesn't play a book move. I think I understand that either a or c are meant to separate the two stones and develop on one side. What about the meaning of b? For example, in one of my 9-stone handi game, W played: 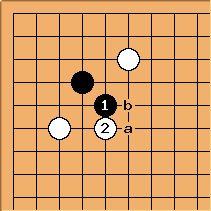 I think the correct response to

is a. But not knowing what

is suppose to do, I have no clue how to develop my corner group. (My guess is that

helps B runs out to the center, but is that it?)

leaves two possibilities - live in the corner, bigger than if

hadn't been played (eg with 3-3), or run into the center (eg with b). In a nine handicap game, black probably isn't clever enough to tell which is better. Therefore, treat them as miai and play somewhere else.