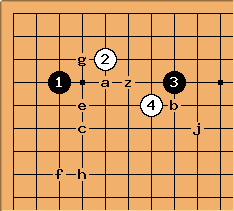 This is a severe response to the two-space high pincer, played only when White has a position to the right. Responses seen in pro play, in decreasing order of popularity:

Looking at the Widest Path, the following might be considered the main line of this joseki: 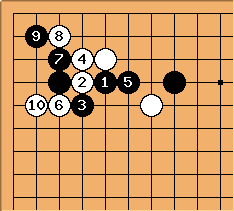 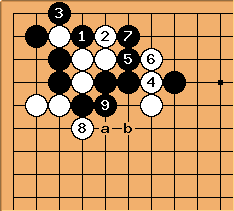 So the normal result is a rather large corner for Black. White takes some outside influence, and can take sente. White can reinforce her position with a, but often this move is left for later. Of course even after white a, black can still cut at b and fight.

This variation was created by Kajiwara Takeo 9 dan, a great joseki innovator known for his severity in local fights. 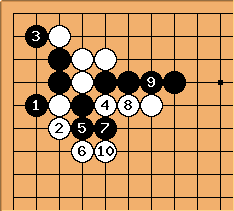 If the ladder does not work for white, it is possible for black to play

here. The ladder appears after 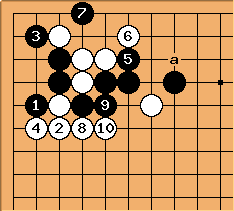 If the ladder does not work, white has to compromise with

here. However, black's territory in this case is large.

Here is another well-established sequence which White can use if he is not so interested in the left side: 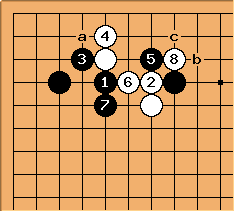 Later, Black can exchange a for b, but it is usual to turn elsewhere at this point. 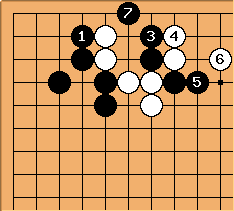 is considered sente is shown here: After

white is painfully cut in two. 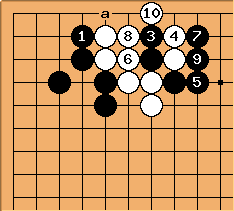 Capturing the stones with

here is hardly better. Black has made thickness on the upper side, and if later black attack with a, the white group will be no more than a liability. 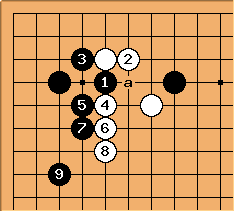 A third option for white after

, taking the corner, and

, securing connection and breaking black's, are to be expected. The sequence to

is one variation, but a is a keypoint for both sides. 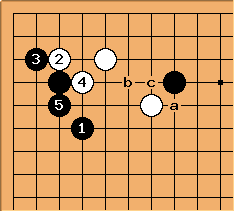 is a simple move, going for the left side. White forces with

to get some stability in her group. After this, fighting will probably shift elsewhere, for example to the upper side. White can also continue locally, for example at a (playing a without

is not good, because black b then takes a large corner).

An alternative is for white to make thickness towards the top with c; after that a white extension on the left is a logical follow-up. 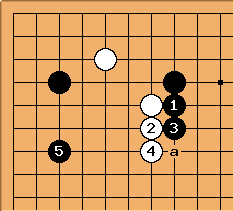 aims for the top side, but it also strengthens white, who might now attack the corner.

defends against that, but means that white is given the large move at a.

tries to build up the top side, but also gives white thickness that can be used to attack the corner.

defends against that, but now white can play the big move at a. 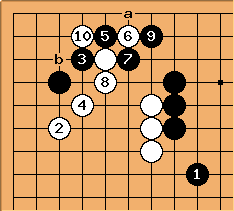 This variation, played between Sugiuchi Masao (black) and Miyamoto Yoshihisa for the 1978 Tengen is often given as a joseki. White gets a large territory, but black's thickness towards the top is impressive. 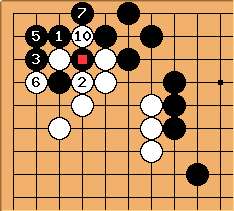 The corner is not fully white territory though. In the game, black played the sequence in this diagram and corner possession was reverted. The difference between this sequence and a white move at

is 21 points, and thus among the largest yose sequences known. 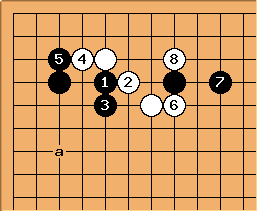 This variation was seen in the 6th Round of the 29th Meijin title. After

black tenukied, to approuch the corner at the topright of this diagram. White ignored this and played A. SmartGo has it in its game collection, with the earliest game Takao Shinji vs Abe Yoshiteru, 25th Gosei, round 1 (1999).

It is not a classical joseki -

seems to be bad shape, putting the pincer stone on an excellent point. But it has been played a few times in the past five years. The continuation looks inevitable, or at least natural.

When an amateur is confronted with this unusual-looking move, he might attempt an unreasonable cut which is not seen in pro games. Here are two refutations given by Kogo's Joseki dictionary: 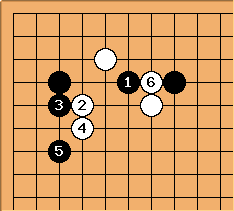 See BQM 547 for more on this particular line of play. 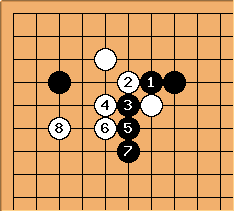 [1] mgoetze: According to a search on