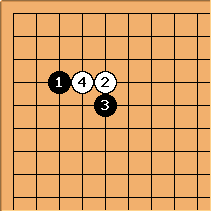 iff: Could someone please explain how to handle this (I had it several times recently): 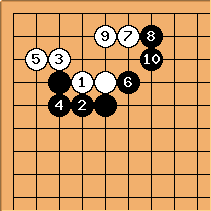 Bill: The Small Joseki Dictionary by Kitani and Suzuki gives this variation, which compares favorably for Black with the joseki starting with

Andre Engels: In professional games, this joseki has been played. However,

and B0 are usually kept in reserve, black playing tenuki after 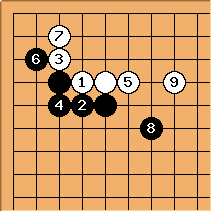 Andre Engels: If white does not want to risk getting enclosed in the corner, he can play

here. One possibility is shown here; played between Yoda Norimoto (black) and Fujisawa Shuko (white) in the 1991 Oza.

Hans: I had the same position in one of my games and I think white 4 (above in iff's diagram) is a bad move but it is not easy to show why. 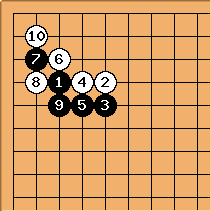 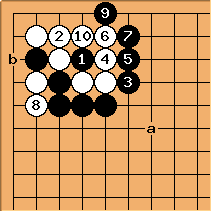 Andre Engels: I have changed Hans's sequence here to one actually played in professional play (he had proposed

at b). Lu Jun (black, but white in the actual game) against Shao Zhengzhong?, China Team Tournament? 1992 (move order slightly changed compared to the game). The turning point comes at

, which is played differently in the three games I have with this position,

being the other two moves. 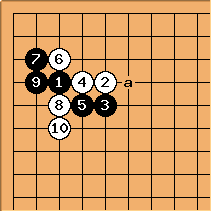 Hans: This leads to a complicated fight, but seems playable.

Andre Engels: It seems professionals find this fight good for black, since white plays W0 differently in the three games I found with this position. white a, black 10 appears twice. 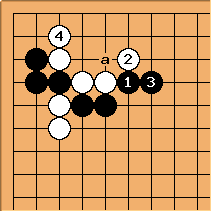 Andre Engels: What is black to do in the fight Hans proposes? At first look the hane at

at first look seems to be an interesting move for black; after

, he is threatening to capture the stones at a. However, 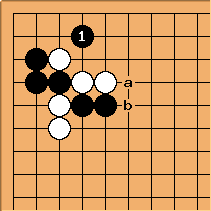 Thus, black would do better to simply live with

. White can now choose between a and b, but after a, black splits her easily, while after b the cut at a remains as a worry. 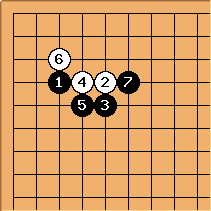