This is an ongoing game on an experimental 13x9 goban.

You are invited to submit your next move: Click on Edit page and replace the intersection (where you want to place your next move) with an increased integer number. Please identify yourself by adding a short comment to the move log.

After every 10th move a duplication of the current game situation is required: In this case please copy and paste the current board and replace odd numbers by 'X' (for black stones), even numbers by 'O' (for white stones). 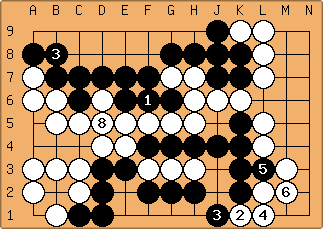 HolIgor: Black concedes the ko because white has two ko-threats at the bottom and two at the top while black has two maximum. 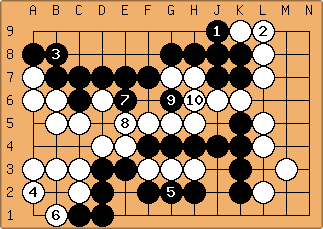 HolIgor: As the result of the game is clear and nobody wants to play I finish it myself. If you think that either side could do better feel free to correct.

is obvious and white still has 2 ko threats. The value of the move is 2.0 moku miai counting. Two black stones are added to the captured stones.

Klaus: Which Ko are you talking of?

HolIgor: Well, when black makes an atari on a stone in the center, white would prevent black's cut. This creates a ko. White will be very mean and try to get the last move before filling the ko and then will win the ko as well. 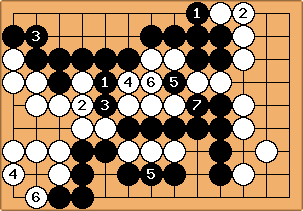 Klaus: maybe your Quest for tedomari ist to frightening for me at this point, so I simply add a move first, and search for the perfect sequence later.... (

HolIgor: As it is clear that White is ahead at moment (counting komi) the problem is just to play perfect yose. I am never content with the yose I play in my games. This is a good opportunity to practice, count the values of the moves, try to apply the theory and so on.

. 2.0 points miai counting. To finish this game in style we have to solve the problem of the last move (tedomari) and a possible half-point ko yet.

Klaus: According to my comments below, I think

is the biggest move left.

. I think that I made a pause long enough before the next move. Connecting is worth 3.5 points miai counting. Check it, please. This is larger than any of the gote moves on the left.

Klaus: I am not good at counting yose, but I want to try to judge the connection on the upper right. 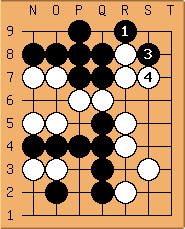 It seems to be unreasonable big to ignore

1 captured white Stone and 2 Points circeled +1 but the capture was gote for black (This as well resembles Corner12ConnectionValue, if HolIgor wants to do so, all comments might be moved to his HolIgor explores yose page)

So the difference between a double gote play is /points, makeing the 3.5 points miai counting you mentioned. So the game continuation was the best orthodox play. But... 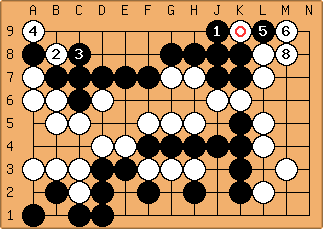 If we compare this with the game, white is about 2,5 points bigger than in the game but black has sente. How much will this be worth? What is the biggest move left? Maybe the next move of the actuall game will help to solve this.

at b8 prevents 4 points at the squared spaces, and it captures a black stone:= 5 points deiri counting.

HolIgor: I corrected your statement above. The value of this move has been discussed here before. It is 2.66 miai counting if there is no threat to the life of the group. See Corner12ConnectionValue. Black might try to fight a ko but this is usually bad. Since black is behind in this game the ko option should be considered. 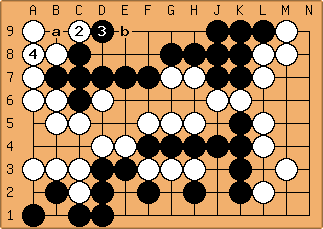 White can start a picnic Ko later and he is likely to win it! Whenever he connects at a, he treatens to capture the whole black group with the atari at b. So we can assume the following local result, if white invested another gote move to start the Ko: 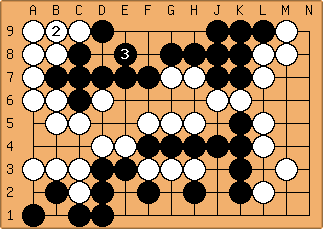 So it is a 5 point gote with a 2 point gote follow up, which we can approximate with a 6 point gote alltogether. Right? 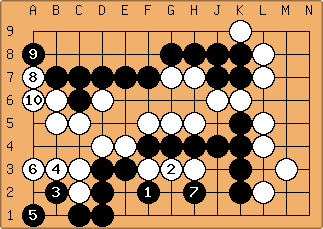 . Just to finish the game.

. Hoping to end this in sente.

at G2 would had been nice.

- I looked back to see who made that awfull move at b1 and let Black invade... to my surprize, it was me. I am so ashamed. It seemed like a good idea at the time.

HolIgor: Did white lose anything?

HolIgor: PS: Is there komi?

- Looks like Black can hold things together and take some profit, too. *fingers crossed*

- Time to defend I guess 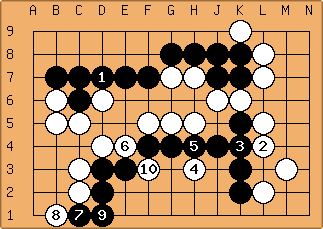 - I don't think white has any chance to kill black on the bottom or cut, but i do think E4 is a good move for white.

Klaus: So me and Frs switch sides again, and I turn out to move for the losing party!

has got to be played. Trying to kill is very interesting.

-- An attempt to kill Black at the bottom; forcing Black H4. White's threat is to cut Black via F3 and E4. 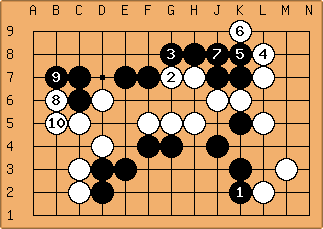 -- White leads with one point (without counting komi). At least, that is what I counted, but I am not to good at counting. 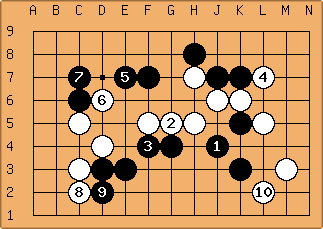 David: Why are Klaus and Frs playing both sides??

Klaus: Sorry, if that bothers you. I will stop that and stay on the white side.

was used to keep the game going (and I thought, it was a good move anyway.)

Frs: Because I always try to play the best move, no matter if I play Black or White (or both colors). In my opion, there is nothing wrong in switching sides, but -ok- I should have earlier stated the main intention of this game: To experiment a little with 13x9, and to watch how it develops when anyone is invited to submit the next move. You may play both colors, but please don't submit the next move if you have already submitted the last move.

-- White can't cut, but can put the pressure on.

was no cut at all! White should have played at around E7 to split Black.

, White needed to claim a little slice of terrotority. In my opion,

was a wasted move. Ok,

established a connection. But in my opion, there was no need to connect those stones or to give away (waste) the possible initiative for cutting (or claiming territority). 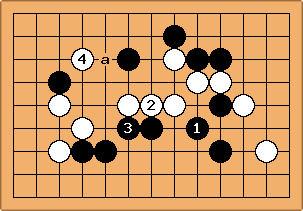 Klaus: You might be right, Frs! However, I had a plan, playing

: after white has connected his stones, he threatens to cut at 3, 4 or a. I hoped, this might isolate and kill some black stones, but I am to weak to read it out. Any comments?

White still needs to catch up, so the next move is going to be a severe cut (hopefully), but a save move first. 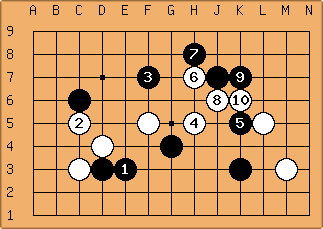 -- I just dicovered this page, so I thought I might add a move. (I hope not to disturb you.) Lets make it complicated!

-- Which corner do you want?

-- That stone on the upper right corner is much too lose, but I think White needs to play safe for the time being. 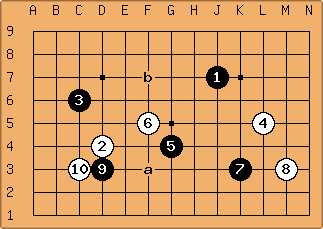 -- the cut one point above

worries me, but cutting and connecting is what Go is all about.

, an aggressive corner invasion. White can choose if Black connects either to

. -- I also considered to play

at b to claim territory at the top ...

starting to make a safe base for

Frs: Securing the bottom right corner with a large knight's move at

what a strange board
also thought of F3 (a), but preferred

-- it's both a corner move, an approach move and (maybe even) an extension of