Sometimes, instead of hane-tsugi on the second line, I see this:

Would you say that this is better or worse than the regular hane-tsugi?

I guess that just like black's hanging connection on the first line ( Hane Tsugi / Advanced ), this gives black ko threats.

This is hane-tsugi, just a hanging connection (tsugi). It is often better than a solid connection. 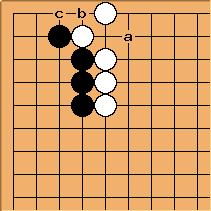 Karl Knechtel: It gives black aji in general. In particular, the peep at a may help other stones to the left, e.g. if Black is trying a desperate invasion (presumably the territory to the left is currently considered White's, as this kind of hane-tsugi is an endgame play).

OTOH, it prevents the reverse sente at b (which is the only reason I can think of why it is "often better"). Or rather, Black has to settle for c instead, in which case b is later a one-point sente. (Or is c therefore sente already? In that case, it hardly seems like White has gained anything...)