Endgame Connect or Not

On the Hane Tsugi page Jan started a discussion of the endgame hane and connection as a purely local situation. Nevertheless this is too good an opportunity to forego commenting on a nifty endgame tesuji that is very easy to understand but often missed by many players. I'm talking about two variations on the theme above: one where Black doesn't have to defend at all, and one where he has a better point to defend than connecting or extending as on the Hane Tsugi page.

Taking into account the stones at the other end of the Black group, Black may be able to ignore the White play at a, or will have to defend as outlined above.

Given the sitation below, White a would be followed by Black d, White c, Black e, White f, and Black connects with g. (The marked black stone is there only to make it obvious that Black lives regardless of White's moves and outside liberties.)

Let's widen our view of the board a little versus the example given by Jan, and assume the position is like this. If Black doesn't defend, White has the atari at a and b to potentially exploit as weaknesses. However it is quite clear to see that Black has an answer to both. Defending in cases like this is equivalent to scoring -1 point in gote. Worse than passing, in other words.

AlainWettach: Maybe the example should be adapted, this looks like a seki to me ;-)

To spoil the joke - look at assumptions of yose problems. Charles Matthews

Watch out in cases like this though. Black can defend against the white atari at a by running away and connecting, but White can continue to play atari until Black is left with a dead shape! (I've seen Dieter do something like this in the Brussels GP tournament when he was 5 kyu or so)

Me: SACRILEGE! Lord Dieter would never err in such a way! Even during his time on earth as a human...

Dieter: Faced with the evil demon of ambiguity, I pray to the goddess of irony ...

Plus Lord Dieter was on the killing side, not the killed. 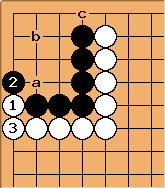 After the 1-3 exchange, Black needs to defend against White a. Apart from the moves mentioned above, he has actually another option which is better. It is Black b in the diagram. First of all it does an adequate job of defending against a: Black can capture the cutting stones. In addition it also has the benefit of making White c gote instead of sente, as it is perfectly placed to defend after White connects. If you would happen to hold the white stones in a situation like this, and you could choose freely between hane on both sides, it is a good idea to think about which one to play first.

There are sente hane plays where you still get the other one in sente when your opponent defends in the wrong way. But there are other hane where any defense by your opponent automatically defends against the other one as well. Don't start with the latter. It's a detail and you should generally not count on your opponent's mistakes to win, but there is nothing wrong with creating opportunities for them to err.