ZeroKun: I recently played breakfast 1p on dashn and I'd just like to post the game since I have nothing better to do. 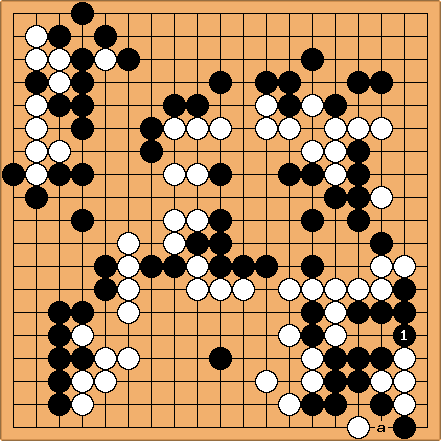 ZeroKun: I was ahead until I played the wrong move, it was late at night so sue me. Move 1 should be a "a", eye vs no eye. Breakfast commented with something like this : "If b played at "a" I would have resigned, but I got lucky.".

Tderz: Breakfast's statement was perhaps the courtesy of a strong player. Black was so far ahead, that even if the lower right black corner dies (in ko after

, I guess; I see several possibilities) black is still ahead (i.e. NOT taken into account the profit from the materialized black ko threat).

So it was not "the wrong move", but it seems like a normal H9-game where Black is ahead by influence and everything for hundreds moves until ... White must nibble away & cash in.

ZeroKun: Well it's my fault for being lazy to count and resigning then :)

Tderz: Well, it's just that I do not see in this one move here a "fatal mistake" which blows the game. Often its just the several sub-optimal moves among the average 120 one makes, which allow for the handicap stones.

ZeroKun: Well, he showed me that if I did play the move he gave out it would be one eye vs no eye. Thanks for your comments. It's nice to see someone looks at this page :)

iopq: This is a 9 stone handicap game, right? BTW, I'm looking for Otake Hideo games, preferably a large collection I can go over and I know you're obssessed with Otake Hideo... so...